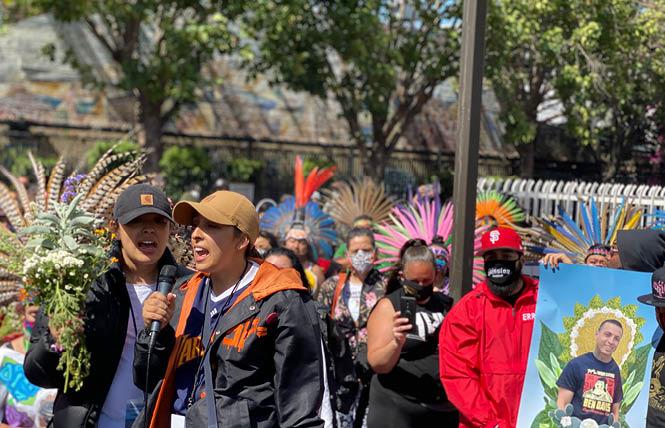 Ashley and Michelle Monterrosa speak at a rally in remembrance of their brother, Sean, a 22-year-old San Francisco resident who was killed by Vallejo police Tuesday. Photo: John Ferrannini

Hundreds showed up to a Mission district rally June 5 in remembrance of Sean Monterrosa — a San Francisco resident killed by Vallejo police Tuesday.

As the Bay Area Reporter previously reported, the 22-year-old man was kneeling and unarmed when he was shot five times by Vallejo police responding to reported looting at a Walgreens.

Monterrosa's sisters, Ashley and Michelle Monterrosa, spoke to the crowd, asking for help in seeking justice.

"That cop executed my brother," Michelle Monterrosa said. "Fuck him. He should not have shot my brother through a police vehicle."

It was reported that the officer fired at Sean Monterrosa through his police vehicle windshield.

Michelle Monterrosa said that after the shooting, she and her sister tried to do some investigative work to find out what exactly happened to their brother.

"You know what he said — what the watch commander said? — He said 'you'll find out on the news,'" Michelle Monterrosa said.

Ashley Monterrosa said she had a birthday this week.

Michelle Monterrosa said that the last time she communicated with her brother was via text. He was asking her to sign a petition demanding justice for George Floyd.

It was Floyd's killing by Minneapolis police May 25 that sparked nationwide protests against police violence on a scale not seen in the United States in decades.

Floyd, a black man, was killed when white former Minneapolis police officer Derek Chauvin kneeled on his neck for more than eight minutes. Three other officers, all since fired, watched.

Seeking justice
Michelle Monterrosa said she was going to make seeking justice for her brother, and people like him, her life's work.

"I'm going to school for Latino studies, but I'm going to get a criminal justice degree too for my brother and people like my brother," she said.

The sisters urged people to call Vallejo police and both Vallejo and San Francisco elected officials.

"I want [San Francisco District Attorney] Chesa Boudin to call out my brother's name," Michelle Monterrosa said. "He thought he couldn't vote, but he went out and voted for him."

Michelle Monterrosa said that her brother was committed to social justice and "fought hard for Mario Woods, Alex Nieto, and Jessica Nelson."

Woods, Nieto, and Nelson were all shot and killed by San Francisco police in recent years.

Sean Monterrosa lived in Bernal Heights, a neighborhood south of the city's Mission district. He worked for the Boys & Girls Clubs of America.

Sean Monterrosa was involved in the social service organization Horizons Unlimited. Celina Lucero, its executive director, said that Monterrosa was a source of healing.

"Sean was all about social justice and about healing. He spent a lot of time healing at Horizons," Lucero said. "I know he is here and is speaking through a lot of us."

According to gay District 8 Supervisor Rafael Mandelman, Sean Monterrosa's father worked for over two decades at the Anchor Oyster Bar at 579 Castro Street.

Mandelman made comments about the shooting death on Facebook. Late Friday, he spoke more extensively with the Bay Area Reporter about Sean Monterrosa's death.

"It is completely tragic," Mandelman said. "It brings the issue home for the Castro. This young man grew up in Bernal. His dad worked at Anchor Oyster Bar for 24 years. It's a complete tragedy."

District 9 Supervisor Hillary Ronen, who represents the Mission district, spoke at the event. She discussed proposed legislation at the San Francisco Board of Supervisors intended to rein in police excesses.

"We want real change," Ronen said. "What's happening right now in San Francisco is just that. My colleagues and I have already introduced laws and it's because of all of you on the street demanding it."

Ronen, along with District 6 Supervisor Matt Haney and District 10 Supervisor Shamann Walton, announced a Right to Protest Safely Act on Friday afternoon. If codified, it would ban the use of rubber bullets, flash bangs, tear gas, and military equipment as crowd control strategies during protests.

Ronen also touted an announcement from Walton and Mayor London Breed to redirect some funding from the police to the African American community in the upcoming city budget.

Civil rights attorney John Burris, who represented the Woods family in its case against the San Francisco Police Department, spoke at the rally. Burris became famous decades ago when he won a $3.8 million judgment in Rodney King's lawsuit against the Los Angeles Police Department.

Burris said that of all the cases of police killings he has taken over the years, Monterrosa's is "the absolute worst."

"He did exactly what you're supposed to do," Burris said. "He got on his knees, he surrendered, and got shot. That is wrong. Murder is the same whether you're putting your knee on someone's neck or shooting them in the brain."

Burris said he wanted the crowd to pressure Vallejo police to release the name of the officer who shot Monterrosa, as well as body camera footage.

"Whatever he did didn't justify shooting him in a surrender position," Burris said.

Prayers of lamentation
The event began at 3 p.m. Friday at the intersection of 24th and Mission streets with a healing ceremony of traditional Native American dances that are prayers for the soul of a departed person.

"Every dance is a prayer," Valerie Tulier-Laiwa of the Latino Task Force said. "We are asking for prayers for Sean's journey, in a good way."

At one point the crowd took a knee — a hallmark of recent protests against police violence — in the memory of Monterrosa.

The event was initially going to end with a march to the Mission police station, where, as the B.A.R. previously reported, protesters confronted police two days ago. But according to Tulier-Laiwa, the family decided to postpone that march to a later date.

The event ended with prayers from another spiritual tradition. Father Richard Smith, the vicar of St. John the Evangelist Episcopal Church at 1661 15th Street, invoked the tradition of prayers of lamentation.

"Holy One: today you will hear from us no hymns of praise or hand-clapping alleluias," Smith said. "Today is for lamentation and tears, for righteous indignation, for saying enough is enough. Another young brother has been cut down by a racist police force. Another mom and dad are now in tears; another family shocked, traumatized; our hearts broken; our cheeks streaked with tears; and our jaws clenched in a holy rage."

Sean Monterrosa's sisters urged the crowd to follow an Instagram page they set up for announcements on their brother's case, which can be found at @justice4sean_.

San Francisco Police did not provide the B.A.R. with a crowd estimate for the event.

Earlier Friday, California Attorney General Xavier Becerra announced an agreement to work with the city of Vallejo and the Vallejo Police Department "to collaborate on a comprehensive policing plan in an effort to modernize and reform [the department's] policies and practices and increase public trust."

"This review and reform agreement we announce today with the city of Vallejo represents a critical step the Vallejo Police Department must take to build trust with people who have lost faith in them," Becerra stated in a news release. "When our communities speak up, we must listen — and, in recent days, people across California and the nation, and in Vallejo have bravely come together to make their voices heard. This is only a first step in our broader fight for racial justice. We must all do our part, and we must do it now."

Early Saturday Boudin told the B.A.R. that he wants a full investigation.

"Mr. Monterrosa was a young man with his whole life ahead of him," Boudin wrote in an email. "I join his family in mourning his tragic death and demanding a speedy investigation into why someone on their knees with their hands up was shot to death through the window of a police car."

Vallejo Police did not immediately respond to a request for comment.

Updated, 6/6/20: This article has been updated to include comments from DA Boudin.