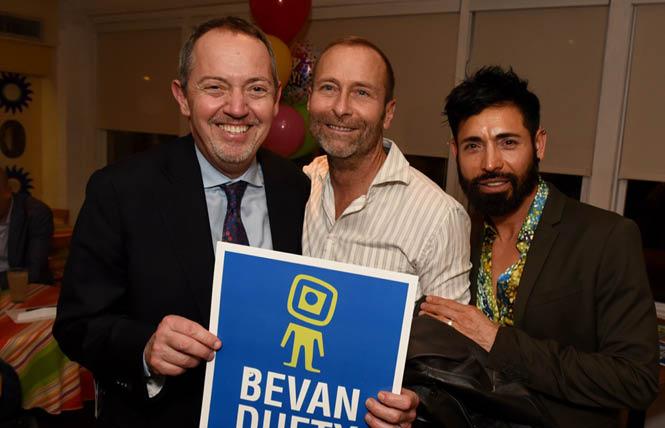 BART board member Bevan Dufty, left, who's running for reelection on the progressive DCCC slate in Assembly District 17, was joined by friends Scott Hobbs, center, and his husband, Alex Serrano, at a recent birthday party fundraiser for Dufty's race. Photo: Steven Underhill

Four years ago so many San Francisco supervisors were seeking seats on the oversight body that runs the local Democratic Party that a proposal was floated to automatically award those who were Democrats ex-officio seats in addition to the mayor if she or he too were a Democrat. State and federal officeholders whose districts include San Francisco already are given ex-officio seats.

Extending those ex-officio seats to supervisors and the mayor ultimately failed to win approval. But the debate it prompted raised awareness about the issue of having city electeds cram out party activists from serving on the Democratic County Central Committee, or the D-triple-C as it is commonly called. Some contend their doing so costs political newcomers a valuable chance to gain the expertise and connections they need to be elected themselves one day to public office.

With six of the current 11 members of the Board of Supervisors and another six elected officials in the city running on the March 3 primary ballot for the 24 seats on the DCCC decided by Democratic voters, the issue of who should be running the day-to-day management of the San Francisco Democratic Party has again drawn debate this election cycle. In the fall the Alice B. Toklas Democratic Club, the more moderate of the city's two LGBT Dem groups, ruffled feathers with its decision to refuse to endorse any DCCC candidate who already holds an elected office.

Blocking such candidates from running for DCCC seats isn't the purview of the local party. Who can run and who is given ex-officio seats on the DCCC is decided by state Democratic Party officials, explained San Francisco Democratic Party Chair David Campos, a gay man and former supervisor who is now a deputy county executive in Santa Clara County.

"Many people are open to reform if it included looking at both elected officials and ex-officio seats," said Campos, who is running again for his DCCC seat and hopes to be reelected party chair come April.

Campos is seeking one of the 14 DCCC seats chosen by Democratic voters in the city's 17th Assembly District. Democratic voters in the 19th Assembly District decide the 10 other DCCC seats. As the Bay Area Reporter noted in two stories about the race in its February 20 issue, most of the 56 DCCC candidates are split between two slates, both of which include current and former elected officials, and candidates seeking local office on the November ballot.

The more progressive slate, of which Campos is a member, is known as the Social Justice Democrats Slate. The candidates from the local party's more moderate camp have banded together as part of the Mobilize & Organize Slate.

On the questionnaire the B.A.R. sent the DCCC candidates was a question regarding the makeup of the oversight panel. Specifically, it asked why elected officeholders should run for the DCCC when they already have full schedules.

It generated mixed responses, with some candidates stating they felt elected officials shouldn't be running for the elected seats on the DCCC and others explaining why they didn't have a problem with their doing so.

AD 17 DCCC candidates
Tami Bryant, a straight woman who is the daughter of a lesbian and the aunt of a nonbinary child, told the B.A.R. she is in the camp that believes only grassroots candidates like herself should seek DCCC seats.

"I have voted for or have supported most of these elected officials, so it is not that I do not agree with, or even like them, it's that I think they're hampering democracy and limiting public engagement by holding too much power and consolidating it over various bodies," wrote Bryant, 58, a member of the moderate slate. "I think the DCCC should be for folks who want to serve their community and constituents as their voice."

Her fellow slate member Mike Chen, 29, a gay man, also told the B.A.R. he doesn't think supervisors should run for the DCCC.

"In other counties, it may make sense for elected officeholders to be on the DCCC. But in San Francisco, when we have so many activists in the party, I don't think elected supervisors should run," wrote Chen. "I would support a change to state law that would forbid elected officials (or some subset thereof, such as supervisors) from running on the DCCC, or which would give supervisors ex-officio seats."

All 11 of the moderate slate members in AD 17 who turned in the questionnaire told the B.A.R. they don't believe elected officials should be running for DCCC seats. Steven Buss, 33, who is bisexual, told the B.A.R. he sees having electeds serving on the DCCC as "a clear conflict of interest" that "borders on corruption."

He specifically took issue with the fact that the DCCC decides on which candidates to endorse in local elections, and that DCCC candidates can raise more than the $500 donor limit those running for city positions must abide by.

"You should not be allowed to vote to endorse yourself for reelection, our use your DCCC race as a slush fund for your other races," wrote Buss. "We are seeing this happen now: several current and former (and future) electeds are ignoring the $500 donation limit, with the intention of rolling that money over into their next race. If I win, I promise to propose a bylaw change that bans this corrupt practice."

Shaun Haines, 41, a gay man who has served as an associate member of the DCCC for seven years, is running for an elected seat as an independent candidate and not as a member of a slate. He told the B.A.R. he agrees elected officials should not seek DCCC seats.

"This unfortunately is unfair to the massive bench of grassroots leaders hoping to rise to the call to action to serve our community," wrote Haines. "We, the grassroots, are suffocating under the shadow of the tree tops. Elected officials who will decide who else can become an elected official to higher offices feels like an oligarchy."

Holding an opposite view are the 11 members of the progressive slate in AD 17 the B.A.R. heard from. They all felt having a mix of elected city officials and grassroots activists serving on the DCCC benefited the local party.

"I think the DCCC benefits from having a mix of more experienced and less experienced members, and I do think that having a few local elected officials on there can help bring both financial resources and policy insight," stated gay District 8 Supervisor Rafael Mandelman, 46, currently the lone LGBT member on the board.

Longtime Democratic Party activist Peter Gallotta, 33, shares his fellow slate member Mandelman's perspective on the issue. But he also expressed a similar concern with how much money DCCC candidates can raise as that of Buss.

"I believe legally enforceable contribution limits for DCCC races would create a more fair playing field for all candidates, so that a first-time candidate or a frequent candidate for office can compete on the same terms, without extreme differences in how much money can be raised," wrote Gallotta. "The challenge is that to do this we need to change state law and I hope we can work together with our state delegation in Sacramento on legislation so that we can have limits in place for the next DCCC election in 2024."

Then there was the response sent in by Bevan Dufty, a gay man who serves on the board that oversees the regional BART transit agency and is a former District 8 supervisor. Like Mandelman and Gallotta, Dufty is also seeking reelection to the DCCC as part of the progressive slate.

"The role of BART director is pretty much at the bottom of the political food chain. Serving on DCCC has given me clout," noted Dufty, who turns 65 February 27. "Specifically, by voting on the critical Democratic Party endorsement I have the ability to collaborate with these candidates when elected."

AD 19 DCCC candidates
A similar difference of opinion was seen in the answers the B.A.R. received from the AD 19 DCCC candidates. The four progressive slate members who turned in questionnaires all said they didn't have a problem with current elected officials running for the DCCC as long as they actively engaged in the work required of those who serve on the oversight panel.

Progressive slate member Keith Baraka, 54, a gay man and city firefighter seeking reelection to the DCCC, also told the B.A.R. he believes expanding the number of ex-officio members of the oversight body should be considered.

"In order to level the field for grassroots candidates and increase representation and diversity for the DCCC I believe we should explore the concept of SF supervisors who are registered Democrats becoming ex-officio members of the DCCC," wrote Baraka. "Enacting this would provide additional resources and improve the brain trust of the body as these are the legislators for our fine city."

Like their counterparts in AD 17, seven of the moderate slate candidates the B.A.R. heard from in AD 19 expressed misgivings about seeing elected city officials also running for DCCC seats.

"Elected officials do not have the bandwidth to take on the responsibility of growing and strengthening the San Francisco Democratic Party," wrote Nadia Rahman, 34, a Muslim American woman of color and the daughter of immigrants. "I don't expect to see my city supervisor tabling at a farmers market trying to register voters — that is not the best use of their time. Moreover, elected officials have name recognition which drowns out grassroots activists like me and leads to non-elected people having to raise vast sums of money to compete."

Expressing a similar sentiment was Cynthia "Cyn" Wang, 38, a queer lesbian mother and native San Franciscan. She raised concerns that "many of these elected officials are running with the explicit intent to win and resign, while others use it to build campaign slush funds and/or reward friends and punish enemies."

Wang told the B.A.R. the DCCC "should instead be a pipeline for new leadership and should help provide checks and balances to electeds."

Expressing less concern about who should serve on the DCCC than her fellow moderate slate members was Suzy Loftus, 45, who was appointed district attorney in the fall but fell short of winning the position on the November ballot.

"I believe in public service and should an individual choose to serve in multiple capacities, I have to believe it is for noble reasons," Loftus told the B.A.R. "However, I do believe we need to diversify and expand what our elected leadership looks like and the DCCC is a perfect opportunity for activists, community leaders, and residents who care about our city to have a platform."