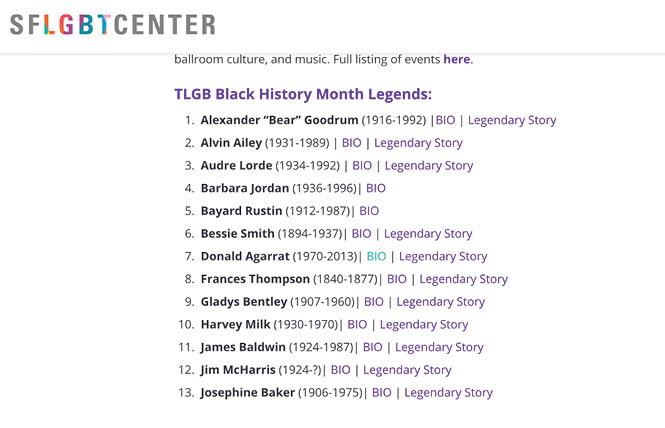 This screenshot from the San Francisco LGBT Community Center's TLGB Black History Month list of honorees shows Harvey Milk, a gay white man, listed for February 10. After being contacted by the Bay Area Reporter, Milk's name was replaced with that of Mary Jones.

The San Francisco LGBT Community Center this week released a list of honorees for Black History Month, and initially included among them was Harvey Milk, a gay white man who was a former city supervisor.

On Thursday (February 6), in response to an inquiry from the Bay Area Reporter, center officials said that Milk's name was mistakenly carried over from another list.

"Harvey Milk was one of the changemakers originally considered for this list in recognition of his advancement of LGBTQ+ culture and his strong allyship with civil rights leaders," spokeswoman Christine Keeves wrote in an email. "However, we ultimately decided to prioritize inclusion of black- and African American-identified people, and accidentally carried Harvey Milk into the final list. We've updated the website with the individual who we intended to be on the final list of honorees."

As of Thursday afternoon, the site listed Mary Jones, one of the earliest transgender people in American history, in place of Milk.

The TLGB Black History Month Project has a website
with a person spotlighted every day of February. For February 6, the honoree is Bessie Smith (1894-1937), who rose to fame singing with Ma Rainey. According to the University of Illinois Springfield's Gender and Sexuality Student Services' webpage, which is linked to by the SF center, it's commonly believed that Smith and Rainey had a sexual relationship, though there is no hard evidence to prove it. (Rainey is also given a day, February 18.)

Each of the entries on the SF center's site includes the person's name, a bio, and a "legendary story" link.

For Milk's old entry on February 10, the bio noted that Milk became one of the first openly gay officials in the U.S. when he won a seat on the San Francisco Board of Supervisors in 1977. That election also made him the first out gay person to win office in San Francisco and California.

Tragically, Milk and then-mayor George Moscone, a straight ally, were assassinated by disgruntled ex-supervisor Dan White November 27, 1978. Milk had served in office only 11 months. (The original posting for Milk on the center's site also had his year of death incorrectly listed as 1970.)

The "Legendary Story" link about Milk had linked to his official biography listed on the Harvey Milk Foundation's website.

Stuart Milk, the gay nephew of Harvey Milk and co-founder of the foundation, did not immediately respond to a request for comment.

Rustin was in the news this week when California Governor Gavin Newsom announced he was granting him a posthumous pardon, stemming from his 1953 arrest on vagrancy charges in Pasadena. Rustin died in 1987 at the age of 75. Gay state Senator Scott Wiener (D-San Francisco) and Assemblywoman Shirley Weber (D-San Diego) had requested the pardon in a letter to Newsom three weeks ago.

One person missing from the list is the late baseball player Glenn Burke, a gay man who played for the Los Angeles Dodgers and the Oakland A's. Burke is credited, along with his then-Dodgers teammate Dusty Baker, of inventing the "high five," according to his Wikipedia page. Burke died of AIDS-related complications in 1995 at the age of 42.

Updated, 2/7/20: This story has been updated to note that the center had Harvey Milk's year of death incorrect and that Marsha P. Johnson will get a park named after her in New York.