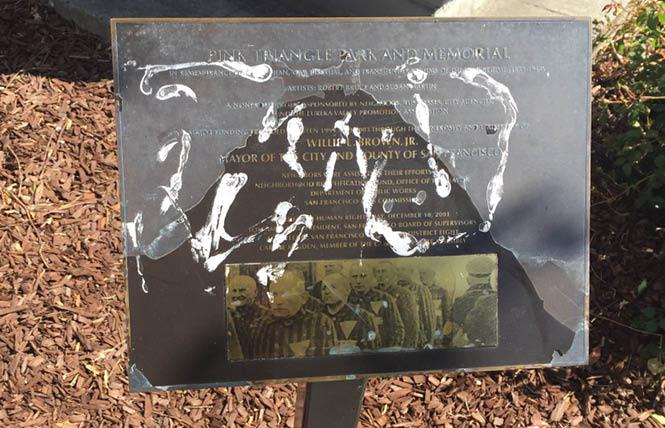 A plaque at Pink Triangle Park and Memorial in the Castro was discovered defaced Wednesday morning.

Sister Gaia Love with the Sisters of Perpetual Indulgence, and president of the Eureka Valley Foundation, which oversees the park, emailed the Bay Area Reporter Wednesday afternoon. Love included a photo, showing a white substance covering the sign. Love said that foundation board member Gerald Abbott made the discovery.

Pink Triangle Park is located at the northwest corner of Market and Castro streets (bordered by 17th Street). The triangular property of approximately 3,000 square feet is owned by San Francisco Public Works, which pays for the power and water used by the park.

During the Nazi era (1933-1945), an estimated 15,000 gay men were interned in concentration camps on charges of homosexuality. Queer public historian Gerard Koskovich, senior public history adviser for the GLBT Historical Society, estimated that 60% of the pink-triangle internees died in the camps, the majority within their first year of detention.

Fifteen triangular sierra-white granite pylons, each with a pink triangle inlaid on the top, form the memorial in Pink Triangle Park. Each pylon represents 1,000 internees. Pink Triangle Park was formally dedicated in June 2003.

Love said the foundation is in the process of setting up a fundraising campaign to repair the plaque.

A spokeswoman for the public works department did not immediately respond to a request for comment.