Buttigieg formalizes his bid, promising the 'courage to move on from our past' 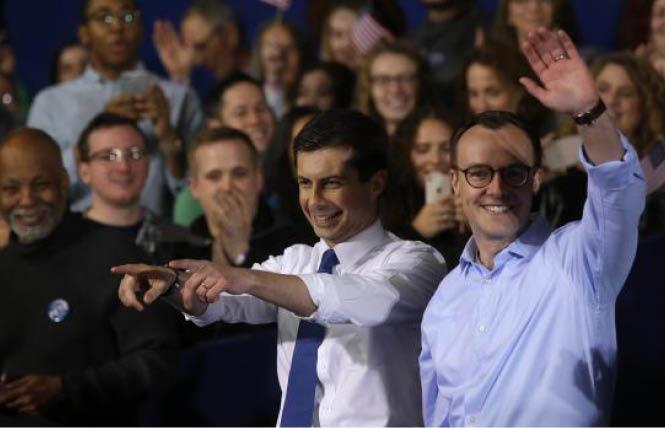 For a guy who acknowledges that 20 years ago he would gladly have taken a pill to turn himself from gay to straight, Pete Buttigieg showed an extraordinary level of confidence and comfort Sunday as he announced his formal campaign bid to become president of the United States.

Buttigieg, the mayor of South Bend, Indiana, evoked the memory of his 17-year-old self Sunday afternoon as he explained to the world why he has the "audacity" to run for president now, as a 37-year-old Midwest millennial. Without saying the word "gay" in his 35-minute speech, he talked about being gay, included a gay icon's song in his pre-speech warm-up music, echoed an LGBT "It Gets Better" mantra, and embraced his husband, Chasten, on stage at the end, before the couple walked off hand-in-hand.

"Running for office is an act of hope," said Buttigieg to several thousand people crammed into Studebaker Building 87 in South Bend, as thousands more stood outside in the rain, and millions more watched on the campaign's livestream, numerous mainstream media livestreams, and on television at an estimated 400 watch parties around the country.

"You don't do it unless you think the pulleys and levers of our government can be used and, if necessary, redesigned to make the life of this nation better for us all," he continued. "You don't do it unless you believe in the power of a law, a decision, sometimes even just a speech to make the right kind of difference, to change our lives better, to call us to our higher values. Things get better if we make them better."

Buttigieg's entry in the 2020 race won early attention for his being the first openly gay candidate for the Democratic presidential nomination and additional attention for the apparent difficulty many television news interviewers had with pronouncing his Maltese American last name (In his recently released memoir, Buttigieg offered "Buddha-judge" but his campaign now pushes "Boot-edge-edge.")

But within two months of launching his exploratory campaign in January, the relatively unknown candidate had capitalized on that early media to introduce his serious, compassionate, and faith-based self to a growing base of supporters far beyond his small Midwestern hometown and the LGBT community. He jumped from not being on mainstream polsters' lists of candidates to being on the list, then 12th on the list, then eighth and, most recently, fifth. A poll of Iowa caucus goers in March and one of New Hampshire voters in April show him in third.

And earlier this month, he again garnered widespread media attention when he told a national Victory Fund event in Washington, D.C. that he had had a hard time accepting being gay when he was a teenager. He said that, as a teen, he would have eagerly taken a pill to become straight or cut the gay out with a knife. In accepting himself, he found a way to make his evolution as a gay person relatable to people who are not gay and a kind of metaphor for the nation's struggle to evolve toward a new and better future.

"It will take courage to move on from our past," Buttigieg said during his announcement speech. "We are not going back."

"You know, if I did get a chance to go back, it wouldn't be out of a desire to live in that past," he continued. "If I could go into the past, I'd go just 20 years back, so I could find a teenaged boy in the basement of his parents' brick house, thinking long thoughts as he played the same guitar lick over and over again on his little Stratocaster, wondering how he could belong in this world.

"If I found him and told him what was ahead, would he believe me?" he asked.

"I can picture him," said Buttigieg as the cheering crowd quieted. "If I could put my arm around him and tell him he was going to see the world and serve his country. That he would not only find belonging in his town but be entrusted by its citizens with the duty of leading it and shaping it ... to tell him that he'll be all right, more than all right.

"To tell him that one rainy April day, before he even turns 40, he'll wake up to headlines about whether he's rising too quickly into becoming a top tier contender for the American presidency," he added. "And to tell him that, on that day when he announces for president, he'll do it with his husband looking on."

In the latest national poll, Buttigieg has 4% of support among 559 Democrats and Democratic-leaning voters. That puts him in fifth place, tied with Senator Elizabeth Warren (D-Massachusetts), in a field of 16 viable candidates included in a survey by Quinnipiac University March 21-15 (margin of error 5.1 points). It also was a bump up from the 1% he had registered just one week earlier.

Some speakers at Buttigieg's announcement were mayors themselves. Nan Whaley, the mayor of Dayton, Ohio, told the crowd that cities like hers and South Bend are recovering because mayors have "done the hard work of figuring out where to go from here."

Christopher Cabaldon, a gay man who's mayor of West Sacramento, California, quipped that as a leader of a small city, he was there "for a big-city mayor like Pete Buttigieg." (South Bend has a population of about 102,000, while West Sacramento is home to about 53,500 people.)

"Mayor Pete sees people for who they are, the trans soldier expelled by the president" because of hate, Cabaldon said. "This is a historic day."

By April 15, presidential candidates had to file with the Federal Elections Commission a report indicating how much in contributions they have raised in the first quarter. While that information was still not yet available from the FEC early Monday morning, Buttigieg's campaign previously announced that he has raised more than $7 million.

The Associated Press ran a story April 9 headlined, "LGBTQ donors help Pete Buttigieg defy 2020 expectations." Although it said, "Financial support from the LGBTQ community has helped Buttigieg defy expectations by raking in more than $7 million in just over two months," it cited the name of only one gay contributor and unnamed "big-dollar Hollywood donors." Late in the story, it quoted LGBTQ Victory Fund President Annise Parker as saying "it's not the LGBTQ community alone that's fueling" Buttigieg's campaign.