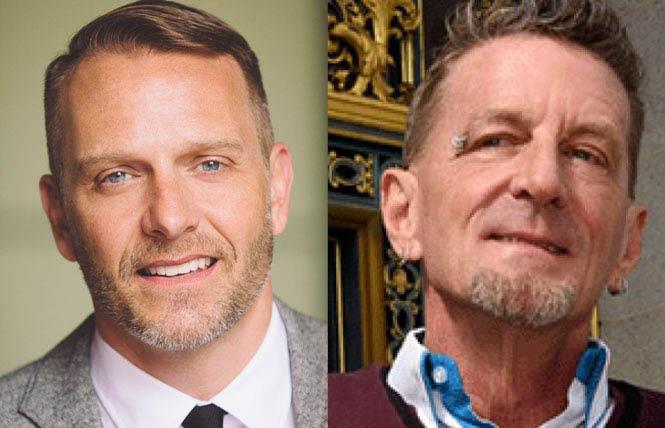 LGBTQ leadership has returned to the Castro Merchants Association, whose members April 7 elected two gay men to serve as co-presidents.

After serving as board president for the past three years, Masood Samereie, a straight ally and owner of Aria Properties, stepped down and was replaced with two new successors, co-presidents Terrance Alan, owner of Flore Dispensary, and David Karraker, owner of MX3 Fitness.

Samereie is staying on as a member of the merchants board, while Brian Springfield, executive director of Friends of Harvey Milk Plaza and owner of Brian Springfield Design, was voted in as vice president. Savio D'Souza, owner of the UPS Store, was chosen as treasurer. Ismael De Luna of Healing Cuts, and Max Khusid of Art House SF, were selected as board members. The position of secretary remains open. The new team was voted in 14-0, although 22 members of the association were present for the virtual meeting. None of the remaining eight members voted no or actively abstained.

As the meeting progressed onto other matters, several members thanked Samereie for his service as president. In addition to remaining on the board of CMA, Samereie is also president of the San Francisco Council of District Merchants Associations, a similar but larger organization that oversees a broader swath of the city's business interests.

Ready for business
Karraker told the Bay Area Reporter that he and Alan had a lot of work to do. After the trials of the COVID pandemic, Castro Merchants is eager to present an LGBTQ neighborhood that is ready for business and tourism, he said.

"We want to make sure we are putting our best foot forward to greet them back," Karraker wrote in an email to the Bay Area Reporter. "That means how they experience the Castro must be in keeping with the iconic status the neighborhood has rightfully earned. It will be great to work with a recognized leader in the community and an LGBTQ elder like Terrance to bring the knowledge of multiple generations to the difficult challenges ahead."

That, of course, means dealing with several hot issues that have dogged the iconic neighborhood for the past few years, including the growing presence of unhoused people, including many suffering from apparent mental illness.

"Top on the list is how we can work cooperatively with other neighborhood organizations and government officials to effectively and compassionately address the drug addicted and mentally ill individuals who have taken up residence in the Castro," stated Karraker. "I don't believe you can have a thriving business district when you have unfortunate folks passed out in front of businesses; verbally or physically assaulting Castro residents, consumers or employees; or openly doing drugs on our sidewalks."

The merchants of the Castro will need to be even more vocal, he said, and "will also redouble our efforts with the [San Francisco Police Department] and city officials to address individuals who are a chronic problem and need assistance, as well as what individual businesses can do to effectively respond to the issue."

The second matter on Karraker's list is dealing with the multitude of empty and boarded up storefronts on Castro Street.

"We are already in discussions with a number of community leaders on how to address this situation," Karraker said. "It is vital that we take the boards off windows to demonstrate that the Castro is a vibrant business corridor, thus attracting additional businesses to the neighborhood."

Toward that end, the Castro Theatre, the management of which was taken over in January by Another Planet Entertainment, is a high priority. As previously reported, plans submitted by architects for renovations to the beloved, century-old cinema have caused alarm and many locals are worried about changes to the theater's role as a community center, as APE plans to bring in live entertainment that will appeal to a much wider audience than the theater has traditionally seen over the past 45 years. APE has insisted that it is very much in sync with the role of the Castro Theatre as a center of LGBTQ culture and does not want to change that. Still, anxiety about the impending changes continues among Castro merchants who see the theater as a linchpin in the economic and cultural health of the neighborhood.

Finally, Karraker said, he wants to bring in events and activities to draw more visitors to the neighborhood. When one is expecting visitors, however, one has to clean the house.

"[T]hat involves making sure the Castro is sparkling clean," he said. "We anticipate a lot of cooperation with the city and [Castro/Upper Market Community Benefit District] to make sure that when someone comes to the Castro they are greeted with a clean, inviting neighborhood."

Castro Merchants has already created events such as the Castro Art Mart the first Sunday of every month, and the upcoming Easter Block Party on April 16, he said. But the organization is also looking at bringing back "iconic events" to the Castro such as Pink Saturday and Halloween festivities.

Both highly popular events were shuttered after public intoxication and several incidents of violence marred the festivities. The Sisters of Perpetual Indulgence said they could no longer guarantee the safety of visitors to the event and pulled out in 2015. That year the LGBT Community Center oversaw it, but the unofficial kickoff to Pride weekend hasn't been held since.

The Castro's annual Halloween party, which drew hundreds of thousands to the neighborhood, ended in 2006 after nine people were shot during the celebration that year. Over the years there have been smaller celebrations, such as Comfort and Joy's Glow in the Streets.

"Of course, we will keep a very keen eye on assuring that the LGBTQ culture that built the Castro is always reflected and honored in everything we do," Karraker said.

"The foundation for all of this will be listening to our membership to hear what concerns they have and how we can all work cooperatively to address them," he added. "It will take an effort from every business owner, every employee and every resident to get the Castro to where it rightfully deserves to be."

Updated, 4/13/22: This article has been updated. Ola Reid declined a board seat on the Castro Merchants Association.