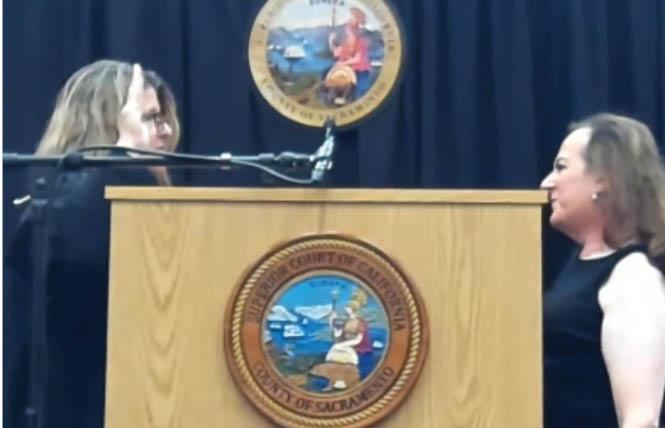 Andi Mudryk, the first transgender person appointed to the bench by Governor Gavin Newsom, was sworn in April 7 during an in-person ceremony at Sacramento County Superior Court. She now doubles the number of out trans jurists on the state bench.

Mudryk thanked Newsom during the event, which was livestreamed, as well as the LGBTQ and disability communities. As previously reported, Mudryk, 58, lives with brittle bone disease, stated the governor's office in announcing her appointment. Since 2020, Mudryk had served as chief deputy director at the California Department of Rehabilitation.

"When he says 'all,' he means all," Mudryk said, referring to Newsom, "including me as the first trans judge appointed to the bench and a person with a significant disability."

Mudryk is now the second openly transgender judge in the Golden State. Victoria Kolakowski was elected to the Alameda County Superior Court bench in 2010. Mudryk mentioned her during her remarks.

"I want to thank Judge Kolakowski, the first trans judge in California," Mudryk said. "She's paved the way and been a friend and colleague." She added that back in 2010, it wasn't likely that trans people would be appointed to the judiciary.

Justice Laurie M. Earl swore in Mudryk. Earl, a lesbian and former judge on the Sacramento County Superior Court, was appointed by Newsom last November to a vacancy on the state's 3rd District Court of Appeal. She became the fifth LGBTQ person serving on one of the state's six appellate courts and the first on the 3rd appellate court bench when she was confirmed in January.

"I'm so honored to be here today," Earl said. "This is truly a wonderful appointment."

Joe Xavier, director of the state Department of Rehabilitation, noted that he and Mudryk worked on many projects together over the years.

"She is a staunch believer of the potential in persons with disabilities and has an unwavering commitment to equity," he said.


Luis Céspedes, Newsom's judicial appointments secretary, noted that Mudryk's Jewish faith is important to her. She aims to adhere to the concept of Tikkun olam, he said, which translates to "repair the world."

He referenced the insurrection at the U.S. Capitol January 6, 2021, calling it "an insurrection on our democracy," the war in Ukraine, and the shooting deaths in the state capital early in the morning of April 3. "From K Street to Kyiv, we've watched bodies come and go. When her father was a youngster, he fled the Nazis in Ukraine" before making his home in Michigan.

"She's a gentle soul, kind, intellectual, courageous, and she will be an outstanding member of this bench," Céspedes said of Mudryk

Mudryk thanked her family, including her father who was watching; her son, Sam, who had to work; her son's father and his partner; and her late mother and late sister.

She said that when her father found out she was appointed, he said it was sad that her mother was no longer with them as she would have been proud, "even though she wasn't a doctor, she's a judge."

Ending the ceremony on that theme, Michael Bowman, presiding judge of the Sacramento County Superior Court, told Mudryk, "You don't have a first name anymore, it's just judge."

"Congratulations on your appointment," he said.