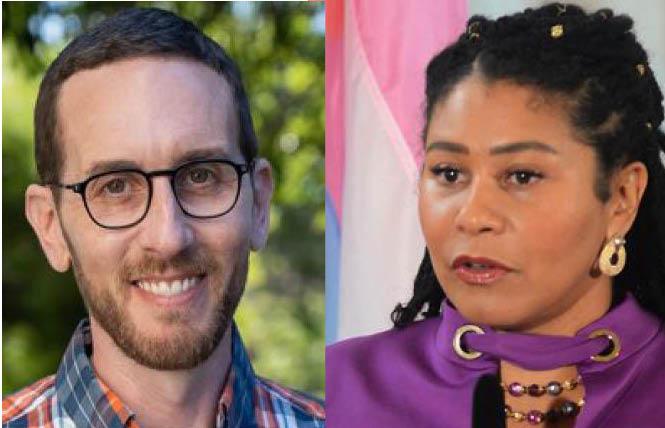 The San Francisco Elections Commission has moved up to Friday its special meeting to consider removing its three appointees helping to redraw the city's 11 supervisorial districts ahead of the fall races for the even-numbered seats. Its doing so has added an explosive element to the already chaotic redistricting process that is supposed to wrap up next week.

Groups such as the League of Women Voters, Asian Americans Advancing Justice - Asian Law Caucus, and ACLU SF Chapter have raised concerns to the elections body about its trio of appointees on the San Francisco Redistricting Task Force. They include queer task force member Chasel Lee, along with vice chair Ditka Reiner and Raynell Cooper.

"For months, dozens of historically and systemically excluded communities in San Francisco have put in substantial time and effort to tell the task force about their communities of interest and how their communities should be respected in the draft maps. Yet, with just a few days left in the mapping process, the needs of many of those groups have been left out of the draft supervisor maps made by the task force," wrote the league and law caucus in an April 6 letter to the elections commissioners.

The oversight body had voted Wednesday to hold a special meeting on Sunday to consider removing its redistricting appointees, as the Bay Area Reporter reported in an online story April 6. But it announced Thursday it would instead meet tomorrow (April 8) at 1:30 p.m. in Room 416 at City Hall.

Its decision to wade into the matter days before the redistricting task force is to send a final map to the Board of Supervisors by April 15 has angered not only the task force members but also local leaders. Mayor London Breed and gay state Senator Scott Wiener (D-San Francisco) both denounced the elections commission "last minute political inference" on Thursday.

"This undermines and corrupts what is supposed to be a transparent and non-partisan process. This is neither transparency nor good government," stated Breed. "The Elections Commission should recognize that a decision to remove members of the public who have served this city for months would destroy the integrity of the redistricting process. Let's finish the process as it's designed and allow the appointed members of the body to exercise their independence free from threats or attacks."

Wiener called it a "shocking and unprecedented step" and a "power grab" in a statement early Thursday when the special meeting was still set for Sunday. If the elections commission were to appoint new people to the redistricting task force then "those appointees will take their seats under a shadow, literally the day before the task force is required to publish its final map," stated Wiener.

He was referring to the fact that to meet the April 15 deadline called for in the city's charter, the task force must publish its proposed final map by Tuesday, April 12, to comply with a 72-hour public notice rule. Even if new appointees are approved Friday, they would be parachuting into a process that has been underway for months, noted Wiener.

Any new appointees, he stated, "would cast that critical vote, affecting San Francisco governance for a decade, without having participated in the months-long public process and many hours of public comment that the Task Force facilitated."

District 6 Supervisor Matt Haney, whose district boundaries will see major changes due to it gaining the most new residents over the last decade amid a glut of new housing development, also told the B.A.R. he opposes the move by the elections oversight body.

"I do not support removing the task force members appointed by the Elections Commission. While there are decisions they've made that I've disagreed with, the independence of the redistricting task force is essential and must be protected. They should continue to serve and complete their work," stated Haney, who could be resigning from the board if he is elected later this month to the vacant 17th Assembly District seat.

Wiener specifically called out District 5 Supervisor Dean Preston and District 3 Supervisor Aaron Peskin for "leading the charge to get the Elections Commission to take this inappropriate, unprecedented step, based on his unhappiness with the proposed lines for his own district."

Preston has made no secret about his displeasure with the maps the redistricting task force has proposed, as they will carve up his district into multiple other supervisor districts. For instance, the Haight and Lower Haight are currently proposed to be moved into District 8 with the LGBTQ Castro district, similar to how those neighborhoods had been combined in the district represented in the late 1970s by gay supervisor Harvey Milk, back when it was known as District 5.

"The most conservative forces in this city realize they can't win district elections in a fair fight, so they're not just moving the goalposts, they're throwing the rules out the window," Preston tweeted on Tuesday, asking people to "speak out against this blatant gerrymandering."

Other areas of today's District 5 would end up in Districts 1 and 2, while its remaining neighborhoods of Alamo Square, Japantown and the Western Addition are proposed to be combined with the Transgender District in the Tenderloin. LGBTQ leaders from both the Tenderloin and western South of Market have lambasted the plan to split them apart and have repeatedly called on the redistricting task force to keep them together in the future District 6.

In the early hours of April 7 the redistricting task force had voted to place on the agenda of one of its meetings in the coming days a resolution opposing the removal of the three commissioners. Chair the Reverend Arnold Townsend had pledged to show up at the Sunday meeting to speak out about the matter.

Task force member Matthew Castillon made the motion to have the body vote on a resolution opposing the elections commission's decision and offered to write it.

"I can not think of anyone who has higher integrity than these three people," he said.

None of the three directly addressed the elections commission's decision during the meeting, though Cooper hinted to it at one point.

"I will try not to be overly self defensive given though the earlier events in this place could be a place I am coming from," he said.

Thursday night they released a joint letter pleading for the elections commission to allow them to finish the job they had volunteered for and reject the calls that they be replaced. They argued their being removed would place doubt about the "legitimacy of the process" with the public

"Over the past few days, we have been accused of bias, attacked on social media, and targeted by elected officials and their allies who are trying to intervene in our independent process and influence the districts that they will ultimately represent. This proposal to remove us as Task Force members is not only an attack on the independence of our committee, but it also fundamentally undermines the public trust in our democratic process," wrote the three appointees.

In the meantime, the redistricting task force continued with its work, regrouping at 3 p.m. Thursday for another marathon session to redraw the city's local political map. As it stood going into the meeting, gay District 8 Supervisor Rafael Mandelman's residence on Valencia Street would be drawn into District 9.

If that were to be adopted then he would need to move in order to run for reelection to the District 8 seat in November. Mandelman is currently the lone LGBTQ supervisor on the board.

For information on the task force meetings, visit its website here.

Information for the elections commission special meeting can be found at its website here.