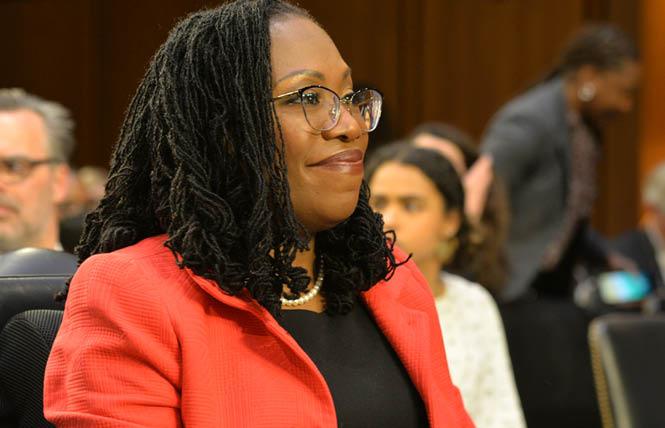 In a historic session April 7 presided over by the first Black female vice president of the United States, Kamala Harris, the U.S. Senate voted 53-47 in favor of confirming Ketanji Brown Jackson's nomination as the first Black woman associate justice to the U.S. Supreme Court.

The White House noted that Jackson joined President Joe Biden and other senior White House staff in the Roosevelt Room to watch the results of the Senate vote on her nomination to the Supreme Court.

On Friday, the president, the vice president, and Jackson will deliver remarks at the White House on the Senate's historic, bipartisan confirmation of Jackson's nomination to be an associate justice of the Supreme Court. Three Republican senators, Susan Collins of Maine, Lisa Murkowski of Alaska, and Mitt Romney of Utah joined all 50 Democrats in voting for Jackson.

"Today's vote to confirm Ketanji Brown Jackson as an associate justice of the U.S. Supreme Court by a bipartisan Senate is an important constitutional and cultural step. PFLAG families know all too well that when our courts reflect the makeup of the nation, the chances for all of us to benefit from equal protections improve, no matter our race, our genders, or where we're from. For all the Black and Brown kids who dream of one day reaching the highest levels of law or government, those dreams got a little closer. Congratulations to Justice Brown Jackson," stated PFLAG National Executive Director Brian K. Bond.

Jackson becomes only the sixth woman and third Black justice to sit on the nation's highest court.

"Judge Ketanji Brown Jackson's confirmation is a pivotal step toward a Supreme Court that reflects our nation's diversity," stated Equality California Executive Director Tony Hoang. "This is a moment of celebration, as an exceptionally qualified Black woman will serve on the high court for the first time in history.

"Throughout her confirmation process, Judge Jackson has demonstrated exactly why President Biden nominated her to serve a lifetime appointment on the court. She showed the country her deep respect for and knowledge of the Constitution, her commitment to equal justice and her unwavering fair-mindedness. And she showed young people across the country that no dream is too big, and no obstacle is too high," he added.

Imani Rupert-Gordon, executive director of the National Center for Lesbian Rights, stated that Jackson is "immensely qualified" to serve on the court.

"We are thrilled to join in the celebration today of the historic and bipartisan confirmation of Judge Ketanji Brown Jackson to the U.S. Supreme Court," Rupert-Gordon stated. "As a leading civil rights organization that works through the courts to seek equity and justice for LGBTQ people, we are acutely aware of how important it is to have a judiciary that reflects the diversity of this country."

Jackson will replace Justice Stephen Breyer, who announced his retirement earlier this year but is expected to complete the court's current term that ends in late June or early July.

As the Washington Blade previously reported, Jackson was grilled by Republican senators on LGBTQ issues during her confirmation hearing before the Senate Judiciary Committee. Senator John Cornyn (R-Texas) opted to press Ketanji Brown Jackson on the Obergefell v. Hodges decision that legalized same-sex marriage as an example of policy-making from the bench.

Jackson stood firm in response to the questions despite lamentations from Cornyn the decision found a due process and right for same-sex couples to marry that overruled the will of the people who voted to ban gay nuptials in his state.

"That is the nature of a right," Jackson replied. "When there is a right, it means that there are limitations on regulation, even if people are regulating pursuant to their sincerely held religious beliefs."

In the nearly 15-minute exchange between Cornyn and Jackson, the Texas Republican pressed her on the expansive interpretation by the courts of due process and equal protection clauses, which he said led to Supreme Court decisions condemned to the dustbin of history like Dred Scott v. Sandford and Plessy v. Ferguson. The Dred Scott decision, in 1857, said that all people of African descent, free or enslaved, were not United States citizens and therefore had no right to sue in federal court. The Plessy v. Ferguson case, in 1896, upheld the constitutionality of segregation as long as such facilities were equal in quality, which came to be known as "separate but equal."

Biden nominates Jackson for US Supreme Court
Sign up!