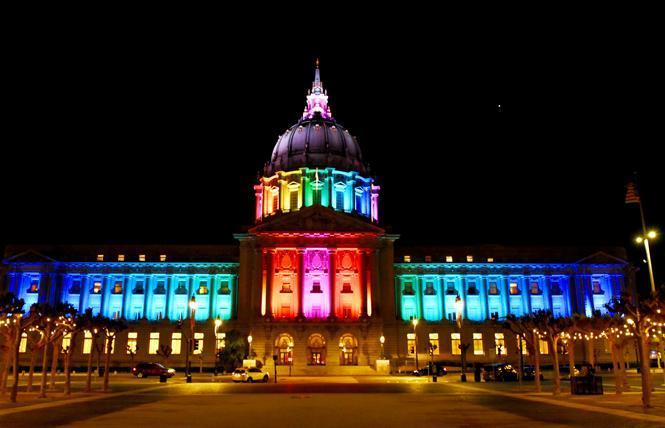 San Francisco's decennial redistricting process could be headed for a chaotic breakdown, with the city's elections commission set to vote this weekend on removing its three appointees to the task force working to redraw the maps for the 11 supervisor districts. Among them is one of the two LGBTQ community members on the task force.

In the meantime, LGBTQ advocates continue to harangue the task force's current map for splitting up LGBTQ communities. As it stood at 11 p.m. April 6, with the task force expected to remain in session late into the night, gay District 8 Supervisor Rafael Mandelman would be drawn out of his seat, with his residence on Valencia Street moved into District 9.

At its meeting Wednesday the redistricting task force faced denunciations from irate community members throughout the city who called their decisions to date "racist," "a joke," "shocking," and potentially in violation of the law. Leaders of both the Transgender District in the Tenderloin and the Leather and LGBTQ Cultural District South of Market continued to demand their neighborhoods be kept together in the same supervisor district.

"The changes that are proposed to basically cut our very nascent cultural district into pieces would have an immense impact," said Angel Adeyoha, the queer and nonbinary executive director of Folsom Street, the nonprofit that puts on the city's leather and fetish street fairs.

While the redistricting task force met Wednesday, the elections commission also convened and voted to hold a special session at 3 p.m. Sunday, April 10, to consider removing the people it appointed to serve on the San Francisco Redistricting Task Force. Among its appointees is queer task force member Chasel Lee, along with vice chair Ditka Reiner and Raynell Cooper.

"San Franciscans deserve a redistricting process that is fair, impartial and led by public input," stated David Woo of SOMA Pilipinas Cultural Heritage District. "Instead, what this task force has done is political gerrymandering that completely ignores hundreds of hours of public comment. I applaud the Elections Commission for taking steps to ensure their appointees are acting without undue influence and in keeping with their duty."

It is unclear what would happen if the trio is bounced off the task force, which would go from having nine members to six, and if they would be replaced Sunday. Three of the other members were named to the task force by the Board of Supervisors, among them gay appointee Jeremy Lee, while the other three are appointees of Mayor London Breed.

Both Chasel and Jeremy Lee, who are not related, came under direct criticism during Wednesday's meeting for not speaking up to keep the city's LGBTQ communities whole by Gary McCoy, the co-chair of the Alice B. Toklas LGBTQ Democratic Club. He implored them to not only keep the trans and leather districts together in District 6 but also to ensure that the Valencia Street corridor remains with the Castro district in District 8.

"Spent the last couple hours watching one member of the redistricting task force play SimCity with the maps, taking zero public input into consideration - while the rest of the task force is largely silent. WHERE ARE OUR TWO LGBTQ MEMBERS TONIGHT AND WHY AREN'T THEY SPEAKING UP?" McCoy wrote on Twitter.

He also showed up in person to address the task force, again calling out the two Lees without naming them for their inaction in demanding that the LGBTQ districts be kept whole. While LGBTQ people have spoken up during the task force's various meetings, such voices haven't been heard "from the other side of the room," McCoy said.

A number of LGBTQ people and straight leaders from the Valencia Street business community implored the task force Wednesday to not move their area, historically a lesbian commercial district and still home to many LGBTQ people, into District 9. Instead, they argued for the area to remain in District 8 with the Castro neighborhood.

"A large portion of LGBQ voters lives on Valencia and near it. We ask respectfully that you keep it whole," said Manny Yekutiel, a gay District 8 resident who owns the eponymous cafe and event space at the corner of Valencia and 16th Streets.

Tyler MacNiven, one of the owners of eatery West of Pecos a block away, noted that the annual Dyke March route takes participants along Valencia Street as they make their way to the Castro via 16th Street.

"It doesn't go through the Haight or Cole Valley," said MacNiven, referring to the fact that the map advanced by the task force early in the morning hours of April 5 had those neighborhoods placed within District 8.


Much of the ire the task force is facing stems from its decision Tuesday to reverse course and no longer move forward with the map it had voted 8-1 to advance April 2. Known as Map 4D, it maintained the Tenderloin and western SOMA in supervisorial District 6 and kept Mandelman's block of Valencia Street between 24th and 25th streets in District 8.

Instead, near 3 a.m. in the morning of April 5, the task force voted 6-3 for a different map known as Map 4B that puts into question the ability for Mandelman, the lone LGBTQ member of the board, to seek reelection this fall. It also put the Tenderloin in a new District 5 joined with the Western Addition, Japantown and Alamo Square.

"I of course have strong concerns about this map and feel that, for District 8 at least, it's a significant move in the wrong direction," Mandelman had told the Bay Area Reporter.

Signaling the tongue-lashing the task force was expected to receive from the public Wednesday, Reiner at the beginning of the meeting asked that people temper their anxiety about the redrawing of the district lines. She stressed that the process is fluid and that a final proposed map would not be reached until the task force's meeting Saturday, April 9, with three more days to make tweaks to it.

"We are doing our best up here. No map is final; this is an iterative process," said Reiner, stressing to the public that, "We need your help, not your anger, not your brick wall which we can't pass. We really look to you to help us on this."

The task force is to submit a final map to the Board of Supervisors by April 15. Its next meeting will be held at 3 p.m. Thursday, April 7.

To learn more about the panel's work and meetings, visit its website here.