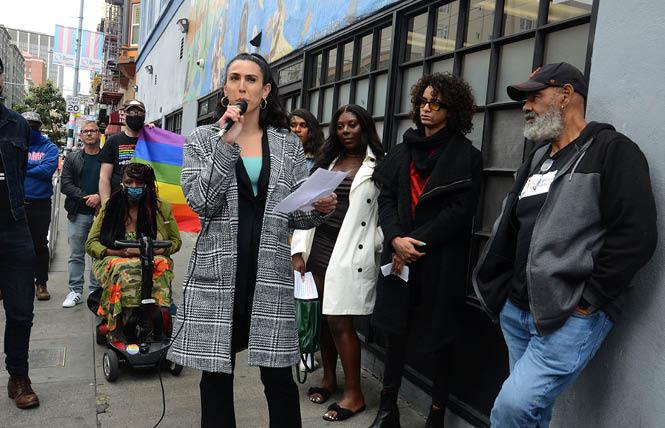 Jupiter Peraza, director of social justice and empowerment initiatives for the Transgender District, joined other community and LGBTQ groups March 30 in speaking in opposition to proposed redistricting maps for San Francisco that would separate the Tenderloin neighborhood from South of Market, diminishing the political strength of the LGBTQ community. Photo: Rick Gerharter

San Francisco's redistricting task force continues to bounce back and forth between new maps for the city's 11 supervisor districts to the consternation of LGBTQ advocates and other groups. In its latest head-scratching move, the panel in the early morning hours of April 5 rejected the map favored by the public that it had nearly unanimously voted for Saturday.

Instead, by a 6-3 vote, it decided to go with a different map that once again splits off the city's transgender cultural district in the Tenderloin from District 6 and places gay District 8 Supervisor Rafael Mandelman's residence into District 9. It mirrors the map the task force had voted for in late March that was roundly criticized by LGBTQ leaders and other advocates.

"It is a complete affront to our community and absolutely an attempt at marginalization," Leather & LGBTQ Cultural District Executive Director Robert Goldfarb told the Bay Area Reporter. "It is quite aggressive and just shocking, actually."

Goldfarb, a gay man, had left the latest redistricting meeting around 1:30 a.m. Tuesday when the task force was still tinkering with the map overwhelmingly favored by community groups that maintains the Tenderloin and its Transgender District with that of central South of Market and the leather district in supervisorial District 6. Known as Map 4D, it also keeps Mandelman, the board's lone LGBTQ member, in his Castro-centered district.

After hearing nearly seven hours of public testimony Saturday, the task force had voted 8-1 to move forward with that map. A number of the members stated that keeping the Tenderloin with central SOMA in the new District 6 was a priority of theirs.

"To me, most important is keeping the Tenderloin and central SOMA together," Commissioner Raynell Cooper had said during the panel's April 2 deliberations.

Yet three days later the task force reversed course and in the early hours of April 5 decided to advance an entirely different map, known as Map 4B. It combines the Tenderloin and a portion of SOMA between Third and Eighth streets roughly to Interstate 80 with the Western Addition, Fillmore, Japantown, and Alamo Square to create a new 5th supervisorial district.

The rest of SOMA would be combined with Treasure Island, Mission Bay, the Dogpatch and Potrero to create a new District 6. Meanwhile, the Haight, Lower Haight and a portion of Hayes Valley would move into District 8.

As for Mandelman, who lives on the block of Valencia Street between 24th and 25th streets, he would squarely be in District 9. Map 4B moves the boundary between the districts west to Dolores Street and further zigzags so that Mission Dolores Park, Mission High School, and Sanchez Elementary School would now be in District 9.

If that map is eventually adopted, Mandelman would need to move in order to run for reelection this fall to his District 8 seat. He told the B.A.R. "I of course have strong concerns about this map and feel that, for District 8 at least, it's a significant move in the wrong direction."

District 5 Supervisor Dean Preston also blasted the current map moving forward. With the Inner Sunset, Cole Valley, and North of the Panhandle slated to be removed from his district, Preston criticized the task force for "gutting" his district "for no disclosed reason" in violation of its obligation to respect existing lines and neighborhoods to the greatest extent possible.

"If Steve Bannon came to San Francisco and drew maps, this is what they would look like," stated Preston, referring to former President Donald Trump's onetime adviser. "This an orchestrated hit, political gerrymandering at its worst."

As noted by the League of Women Voters of San Francisco, which has been covering the redistricting process on its blog, task force chair the Reverend Arnold Townsend expressed concern at the latest meeting with "for lack of a better word, us looking flighty. It's better to make no decision than a bad decision."

Yet Townsend voted with the majority "to take itself back in time," wrote the league. "This backwards motion comes when the task force has just five days and four meetings left before they must be done drafting the new supervisor district map."

Waking up to the news was a shock, Goldfarb told the B.A.R., but he remains "optimistic they will do the right thing" in the coming days as the task force continues to work on the new supervisorial maps.

"They are going against what the massive public feedback has been," said Goldfarb. "We hope, once again, they will listen to the public, which seems at the moment they are not doing. I think it is unfortunate they are not listening to the public. It is going to require strong turnout on the part of the community."

Harvey Milk LGBTQ Democratic Club President Edward Wright, who has repeatedly called into the task force's meetings to denounce its proposed maps for District 6, told the B.A.R. Tuesday that the latest proposal continues to be an affront to the city's LGBTQ community.

"This map divides and disenfranchises queer and trans communities, neighborhoods, and cultural districts, severing our political power and cultural ties. It is shameful, unacceptable, and it would be laughable if it wasn't so harmful," Wright said in a texted response. "I don't know who the task force is listening to, but it isn't the public, and it isn't queer and trans voices. Our communities are under legal assault across the country. We expect, demand, and deserve better from San Francisco."

The task force is to submit a final map to the Board of Supervisors by April 15. Its next meeting will be held at 5:30 p.m. Wednesday, April 6.

To learn more about the panel's work and meetings, click here.