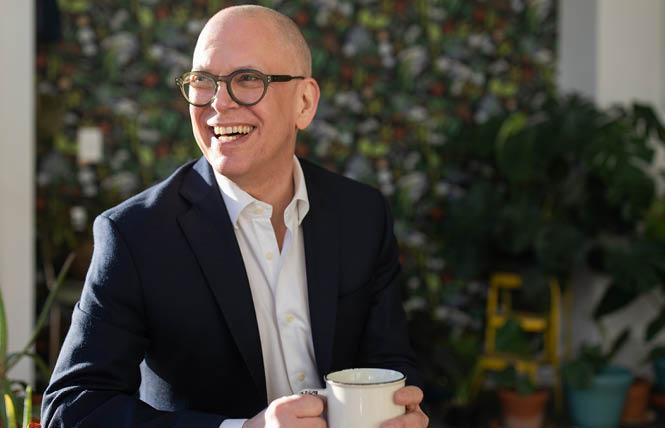 Jim Obergefell, the plaintiff in the same-sex marriage case Obergefell v. Hodges and a co-owner of Equality Wines LLC, is now running for an Ohio legislative seat and will be in San Francisco to kick off fundraising for his campaign. Photo: Emma Parker Photography

With an event this week in San Francisco's LGBTQ Castro district, Jim Obergefell is kicking off his efforts to raise funds for his Ohio statehouse bid this year. The Buckeye State native has long had ties to the Bay Area due to his involvement in a wine label that has a downtown tasting room in the LGBTQ vacation destination of Guerneville.

Obergefell gained international notoriety as the lead plaintiff in the 2015 U.S. Supreme Court case that established marriage equality in all 50 states. He had married two years earlier his late partner, John Arthur, dying at the time from amyotrophic lateral sclerosis, or ALS, on a Maryland airport tarmac.

Three months after they wed, Arthur died. But a few months prior, because Ohio didn't recognize the couple's marriage, the men had sued the state in federal court. It led to the landmark ruling in Obergefell v. Hodges.

Later that year Obergefell teamed up with Elissa Nauful and Matt Grove, who are both straight, to launch Equality Wines LLC. On June 26, 2016, the first anniversary of the court's historic marriage equality ruling, they released their first 200 cases of Love Wins Cuvee, a sparkling wine made from grapes grown by Iron Horse Vineyards in Sebastopol.

A few years later the wine label opened a tasting room at the corner of Main Street and Armstrong Woods Road in the heart of Guerneville along the Russian River. Closed due to the COVID-19 pandemic, it has since reopened, and Obergefell plans to be in Sonoma in July for a dinner event with the LGBTQ group Out in the Vineyard.

"It is going well. It kind of amazes me to say this, but the pandemic was very good for us in terms of our direct-to-consumer online business," Obergefell, 55, said of the wine label in a recent phone interview with the Bay Area Reporter. "We struggled having the tasting room being closed, but we continue to release new wines."

Most recently Equality Wines, which donates part of its proceeds to various rights groups, released its second vintage that supports immigrants' rights. Called The Migrant, the 2018 Napa Cabernet is co-produced by Ceja Vineyards of Napa, owned by a first-generation immigrant Mexican American family.

"We will have donated $200,000 to equality organizations as a business by the end of spring," said Obergefell.

Seeking political office
Meanwhile, Obergefell is focused on his candidacy for Ohio's 89th House District centered in his hometown of Sandusky, another vacation destination along the shores of Lake Erie. His April 6 fundraiser at the private LGBTQ social club and event space The Academy in San Francisco comes a week prior to Obergefell holding his inaugural event for his campaign in the statehouse district on April 13.

He is the lone Democrat who filed to run against Republican Ohio State Representative D.J. Swearingen. As the two are the only candidates running in their party primaries, they will face off for the legislative seat in the November 8 general election.

Obergefell told the B.A.R. he has no qualms about coming to San Francisco, long a place ridiculed by Republicans and used as a boogeyman to attack their Democratic opponents. He expects to tap into his connections he has made across the country to help fund his campaign.

"I stand for doing something that made the world a better place," he added. "People like to support things like that."

If elected, Obergefell would be the first gay Democratic man to serve in the Ohio Legislature and double its LGBTQ representation. The lone out legislator at the moment is lesbian state Senator Nickie Antonio, who is seeking a second four-year term this year. She was Ohio's first LGBTQ state legislator, having been elected to a state House seat in 2010.

In addition to pressing for LGBTQ rights, restoring and protecting the waters of Lake Erie and attracting jobs to Sandusky and the surrounding region are two of Obergefell's top priorities he would want to work on as a state legislator. Having seen his own father and brothers lose their jobs at local manufacturing plants, employment is a particularly personal issue for him.

"For me, when I think about why I am running and things important to me, it is really jobs and opportunities," said Obergefell, adding that, "the ability for people to earn a living wage and care for their families is my leading issue."

His and Swearingen's primaries were to be held May 3, but due to ongoing legal fights over the gerrymandered districts Ohio Republican leaders continue to adopt, their races and that of the state's other contests for statehouse and congressional seats will not appear on the ballot next month, as elections officials for Erie County, which includes Sandusky, note on their website.

"I wish I could tell you," Obergefell told the B.A.R. when asked about when his primary will be voted on.

While the exact boundaries for his district are also not finalized, Obergefell doesn't expect the current 89th House District to change all that much. It straddles both Ottawa and Erie counties, with Sandusky its largest city.

He grew up in the city, leaving after graduating high school to attend the University of Cincinnati. Obergefell remained to work as a teacher and first met Arthur there. Obergefell returned to be with him after entering graduate school at Bowling Green State University.

Eventually, Obergefell moved to Columbus. No longer wanting to make the four-hour round-trip to visit family and friends in Sandusky, he decided to move back to his hometown last June. He quit his job with the LGBTQ advocacy organization Family Equality in order to seek public office.

"The pandemic and just being stuck in my apartment by myself and rethinking things, I realized what I needed and most missed was my family," said Obergefell, who in addition to being a winemaker also is an in-demand speaker.

Over the years people have suggested he seek a congressional seat due his national profile from the court case. But Obergefell told the B.A.R. he never felt qualified to seek federal office since he has never held an elective position.

"I have never run for office before," he noted. "From a very personal point of view, to run for U.S. Congress just, to me, felt too big, too overwhelming."

While running for a statehouse seat is also quite the endeavor, Obergefell finds encouragement from the fact he can rely on the support of friends and relative who reside in the district.

"I love this because all five of my siblings, my in-laws, my sibling's spouses can vote for me, and I have lots of nieces and nephews in this district," he said. "Even running for U.S. Congress I would be representing them, but there is something to me really beautiful about running for the Ohio House. Knowing in this district I would be representing my family is something really beautiful for me."

As for another endeavor of his, Obergefell told the B.A.R. someday he would like to fall in love again. It was a promise he made to Arthur that he would be open to finding another partner.

"If I don't, I will be letting John down," said Obergefell, currently single. "He would tell me directly and also tell our family and friends when they would hang out with John to give me a break. He would tell them to remind me when he is gone, he wants you to find love again."

UPDATED 4/6/22 to clarify that Obergefell and Arthur had filed their federal lawsuit a few months before Arthur died.