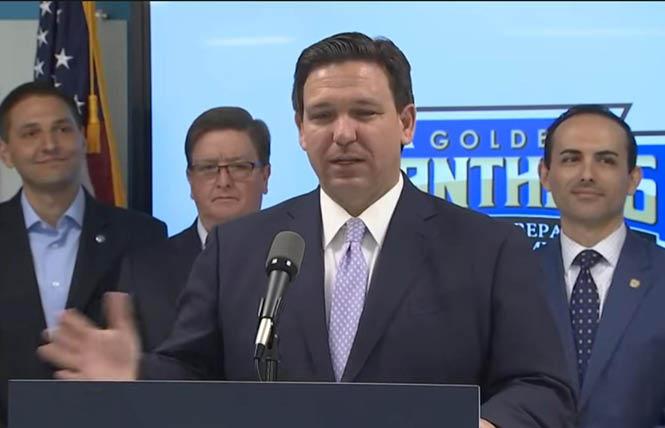 At a news conference, DeSantis said teaching kindergarten-aged kids that "they can be whatever they want to be" was "inappropriate."

"It's not something that's appropriate for any place, but especially not in Florida," he said.

House Bill 1557, titled "Parental Rights in Education," will not allow classroom instruction about sexual orientation and gender identity in grades K-3, while "age-appropriate" teaching would be allowed in older grades — though it is not clear what is considered "age-appropriate." The bill would also allow parents to sue schools or teachers who violate the legislation.

When the measure cleared the Florida Legislature earlier this month, statewide LGBTQ+ rights organization Equality Florida promised it would "lead legal action against the state of Florida to challenge this bigoted legislation."

"We will not sit by and allow the governor's office to call us pedophiles," the group said in a statement.

DeSantis' signature comes after nationwide pushback from top LGBTQ+ organizations, Democrats, LGBTQ+ youth, corporations, and the White House. According to Equality Florida, over 600,000 people sent emails to lawmakers in opposition to the legislation.

While co-hosting Sunday's Academy Awards in Los Angeles, lesbian comedian Wanda Sykes addressed the bill, telling the audience that "for you people in Florida, we're going to have a gay night." Fellow co-hosts Amy Schumer and Regina Hall then repeated, "gay."

After being criticized for a muted response to the legislation, Walt Disney CEO Officer Bob Chapek apologized for the company's response and clarified his opposition to the bill.

Still, employees put on a "full stage" walkout last week at various corporate locations across the U.S. to protest what they see as a "lame" and "inadequate" stance taken by the company and Chapek.

LGBTQ+ youth across the state vehemently protested the bill, with thousands of students staging a walkout at the beginning of the month.

"I pushed back on this, as I wasn't going to allow staff to minimize our reach and message," Jack Petocz, the lead organizer, said. "Using my megaphone, I told students to hold onto their flags and not to allow them to silence us."

Some Republicans in the Florida Legislature also voiced concerns over the bill, prompting several to break from their party and vote against it.

"I am not going to support the bill today in hopes that we can find a way to love our neighbors," said Senator Jeff Brandes, who was one of two Republican senators to vote against the legislation.

After the vote in the House, where seven Republicans casted a vote against the measure, Nadine Smith, executive director of statewide LGBTQ+ group Equality Florida, said: "This bill is so extreme that it inspired a rare rebellion within House GOP ranks."

LGBTQ+ youth who had access to spaces that affirmed their identity reported lower rates of attempting suicide than those who did not, according to The Trevor Project.

This bill bans classroom instruction on sexual orientation and gender identity in schools, effectively erasing LGBTQ identity, history, and culture — as well as LGBTQ students themselves.

"Governor Ron DeSantis signed the 'Don't Say Gay' bill in the most cowardly way possible today. He hid his agenda from the media and the public until the last moment, skulking onto a charter school campus that is exempt from the law and away from students who would protest his presence," Smith said. "He has attacked parents and children in our state by invoking hateful anti-LGBTQ stereotypes all to pander to his right-wing base as he prepares to run for president in 2024.

"DeSantis has damaged our state's reputation as a welcoming and inclusive place for all families, he has made us a laughing stock and target of national derision," Smith added. "Worse, he has made schools less safe for children. Equality Florida will defend the rights of all students to have a healthy environment to learn and thrive and for all parents to know their families are included and respected. This law will not stand and we will work to see it removed either by the courts as unconstitutional or repealed by the legislature."

"LGBTQ youth in Florida deserve better. They deserve to see their history, their families, and themselves reflected in the classroom," said Amit Paley, CEO & executive director of The Trevor Project. "While I am saddened to see this harmful bill signed into law, I am inspired by the outpouring of support for LGBTQ students we have seen from parents, teachers, celebrities, and their peers. Social support is vital for suicide prevention, and I want to remind LGBTQ youth in Florida and across the country that you are not alone."