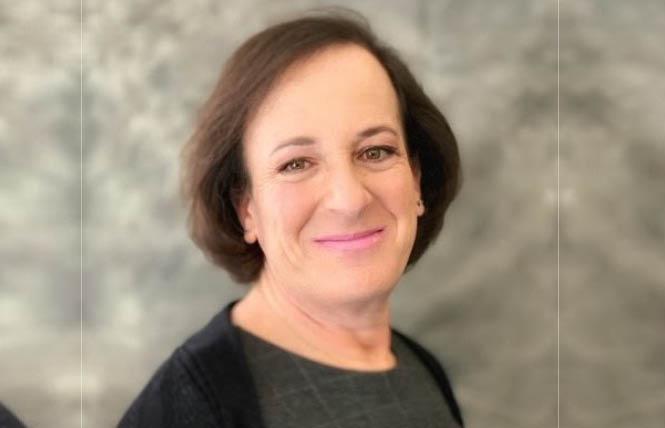 Andi Mudryk is the first trans person to be appointed to the bench and will be the second trans judge in California once she is sworn in. Photo: Courtesy Governor Newsom's office

With the appointment March 25 of Andi Mudryk to the Sacramento County Superior Court, California will now have two transgender judges serving on the state bench. Mudryk is the first trans person to be appointed to a judicial vacancy in the Golden State.

Alameda County Superior Court Judge Victoria Kolakowski in 2010 became the country's first elected transgender trial court judge. The wife of Bay Area Reporter news editor Cynthia Laird, Kolakowski will automatically be elected to another six-year term this year as no one filed to challenge her on the June primary ballot for her seat #16 on the East Bay bench.

Governor Gavin Newsom appointed fellow Democrat Mudryk, 58, of Sacramento, to fill the vacancy created by the retirement of Judge Benjamin G. Davidian. Since 2020, Mudryk has served as chief deputy director at the California Department of Rehabilitation.

"We finally have a state court judge that was appointed by a governor, which is long overdue, as I was elected over a decade ago," Kolakowski stated. "I am glad that I'm finally getting a transgender colleague on the bench here in California."

"We are thrilled to be celebrating another historic milestone today for California's LGBTQ+ community in Governor Newsom's historic appointment of Andi Mudryk to the Sacramento County Superior Court," stated Executive Director Tony Hoang. "A seasoned civil rights advocate, Mudryk brings almost 20 years of experience in disability rights and rehabilitation to the court. As governors and state legislatures across the country attack the trans community, we applaud Governor Newsom's continued commitment to increasing trans representation across appointments and on the bench. California continues to remind the rest of the country that LGBTQ+ voices are essential to achieve full equality."

Between 2018 and 2020 Mudryk had served as the state agency's chief counsel. Before being hired by the state, she was director of litigation and policy advocacy at Neighborhood Legal Services of Los Angeles County from 2017 to 2018 and executive director at Disability Rights Advocates in 2017.

She is a person with a disability, brittle bone disease, stated the governor's office in announcing Mudryk's appointment. Between 2006 and 2017 Mudryk served in several positions at the disability advocacy organization, including as its deputy director, director of litigation, and managing attorney.

"She is a longtime champion of disability rights, a highly regarded attorney, and I know from our conversations over the past year that she is proudly out as a transwoman," Kolakowski stated. "This is a great day for the people of Sacramento, as they will be getting a superb judge."

Mudryk also served as the director of litigation and advocacy at the Arizona Center for Disability Law from 2002 to 2006. She graduated from the George Washington University Law School and is a member of Sacramento's LGBTQ+ bar association SacLegal, which she also has co-chaired.

Once sworn into judicial office, Mudryk will bring the number of LGBTQ people serving on the California bench to at least 84, according to figures compiled by the Bay Area Reporter. As the B.A.R. reported earlier this month, the number of out jurists on state courts has increased by at least 30% largely due to the appointments Newsom has made since taking office in 2019.

The Commission on Judicial Nominees Evaluation 2021 Statewide Demographics Report released March 1 revealed it had reviewed a female transgender applicant last year and found her to be exceptionally well qualified. Mudryk was likely that person.

Kolakowski stated that Mudryk "led the pack of several extremely qualified transgender attorneys that have been seeking appointment to the bench here in California and beyond."

Mudryk will bring the number of known LGBTQ judges on the Sacramento County bench to two, based on the latest demographic data for the makeup of the state courts that was released on March 1. It covered those judges serving as of December 31, 2021.