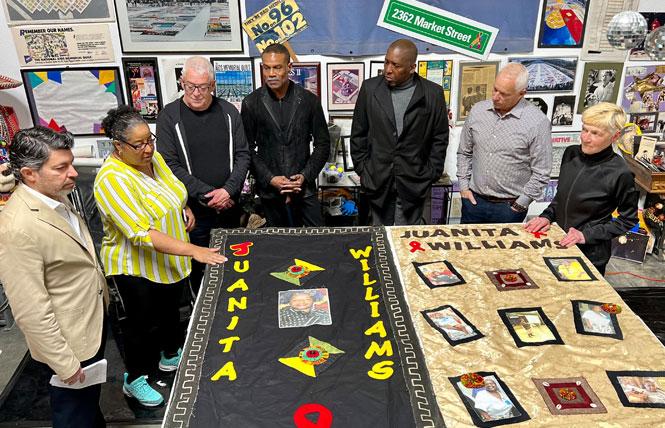 A massive display of the AIDS Memorial Quilt will take place in San Francisco's Golden Gate Park during Pride Month, officials of the National AIDS Memorial Grove, which oversees the tapestry, told the Bay Area Reporter.

The news is set to be formally announced at a March 29 news conference at the San Leandro warehouse that houses the quilt.

Meanwhile, the grove has received a grant from Mayor London Breed's office that will help cover some expenses for its new office space in the Castro, which it moved into earlier this month.

The AIDS quilt display will be the largest ever in San Francisco and the biggest display anywhere in the U.S. in a decade — the last such showing was in Washington, D.C. 10 years ago — Kevin Herglotz, a gay man who is chief operating officer for the grove, told the B.A.R. in a phone interview. The San Francisco installation will include 350 blocks of the quilt, which contain almost 3,000 panels, he said. (A block of the quilt has eight panels.)

The display is set for Saturday and Sunday, June 11-12, in Robin Williams Meadow with some quilt pieces being displayed at the AIDS grove, which is also in Golden Gate Park, Herglotz said.

"The panels will tell the story of then and now," Herglotz said, explaining that there will be some older, iconic panels along with newer ones — all remembering people who have died of HIV/AIDS. "There are a whole lot of new panels, particularly from the Black community and the South.

"Now, they will tell the story of the last 35 years," he added, referring to the quilt's formal establishment in 1987 under the auspices of the Names Project.

The Names Project Foundation used to be located in San Francisco. The quilt's history dates back to 1985 when gay activist Cleve Jones had participants in that year's annual candlelight march honoring the deaths of gay San Francisco Supervisor Harvey Milk and Mayor George Moscone write down the names of people lost to AIDS onto placards that were then attached to the federal building near City Hall.

Two years later Jones; Mike Smith, a gay man; Gert McMullin, a straight ally; and several other people opened a Castro storefront, now a city landmark, and the AIDS quilt was officially born. The display will officially mark 35 years since the first panels of the quilt were stitched together.

The Names Project ceased operations following its wind-down after the November 2019 announcement that the AIDS grove would become the steward of the quilt. In February 2020, shortly before the Bay Area locked down because of the COVID pandemic, the thousands of panels arrived to be stored at a warehouse renovated for that purpose in San Leandro, near the Oakland International Airport.

The AIDS grove had planned to curate a large display of the quilt in April 2020 to coincide with Golden Gate Park's 150th anniversary. But the pandemic put an end to those plans. Herglotz said that the upcoming installation would be about one-third larger than that one would have been.

Herglotz said the grove envisions an opening ceremony, followed by volunteers reading names all day that Saturday. He was firm that there would be no speeches. The viewing is free and open to the public. There will be other volunteer opportunities as well, he said. A map is expected to be developed to point people to specific blocks of the quilt being displayed, which is already searchable by name on the grove's website.

Gilead Sciences Inc. is the presenting partner for the installation, Herglotz said.

More than 1.3 million Americans are currently living with HIV/AIDS, with marginalized populations, particularly Black, Hispanic, Asians and Pacific Islander, and LGBTQI+ communities being disproportionately impacted, particularly in the South, where rates of infection are rising among many of these populations, the grove stated in a news release.

New office in the Castro
In other news, the AIDS grove recently moved its offices to the Castro and received a $15,858 grant from the city, Herglotz said. The funds were part of $3.3 million distributed to nonprofits through the mayor's office, the Office of Economic Workforce Development, Mayor's Office of Housing and Community Development, San Francisco Arts Commission, and Community Vision Capital and Consulting, according to a news release from the mayor's office. The funds are part of the San Francisco Nonprofit Sustainability Initiative and are for space acquisition or lease stabilization, the release stated.

"The pandemic has shown us just how critical the services our nonprofits provide and the important role they play in our communities," Breed stated. "The Nonprofit Sustainability Initiative not only allows organizations to acquire and lease space during a time when it has become increasingly difficult to do so, but it provides them with an opportunity to strengthen their resources and remain deeply rooted in the community."

John Cunningham, a gay man who's CEO of the AIDS grove, wrote in an email that the organization gave up its office in the Flood Building in downtown San Francisco during the pandemic.

"We started working remotely before the lockdown in late February 2020," Cunningham said in a phone interview, adding that he saw what was coming regarding COVID and many of the staff are immunocompromised. "In June our lease was up" at the Flood Building, Cunningham said, and the grove put its stuff in storage and employees continued remote work.

Cunningham said the grove "always had a vision to return to the Castro," especially after it took over the quilt, which got its start in the LGBTQ neighborhood.

The grove found a location at 543 Castro Street, in a Victorian above what was formerly the Best in Show pet store (a Turkish coffee shop, Aegean Delights, is located there now, Cunningham said.) While not a storefront, Cunningham said there would be quilt panel-making workshops held there. There are five offices and a community space, which Cunningham said would be made available for community groups to hold small meetings (six to 10 people). The offices are a little over 1,000 square feet, he added.

Two days a week, Billy Lemon, executive director of the Castro Country Club, a clean and sober space, will use the grove's offices, Cunningham said.

Lemon, a gay man, did not respond to a request for comment.

As far as displaying portions of the quilt in the Castro, Cunningham said that is a goal.

"It is certainly our vision to have the quilt on display in one or more prominent locations in the Upper Market area," Cunningham wrote in an email. "At present we have not identified a specific location or partner."

He added that panels are always presented in the restaurant Catch, 2362 Market Street, the original home of the quilt. It is San Francisco City Landmark #241, one of eight officially recognized historic properties in the city with ties to LGBTQ history.

SF nonprofit to be AIDS quilt steward
Sign up!