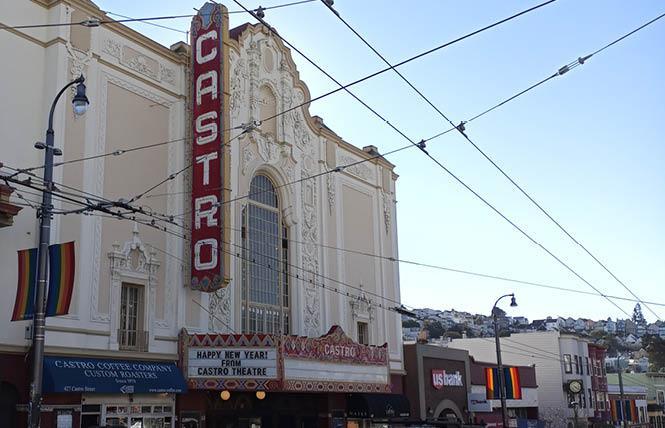 The Castro Theatre's planned renovations will be extensive, according to documents filed with the planning department. Photo: Scott Wazlowski

Proposed plans for the renovation of the Castro Theatre appear to be more extensive than originally implied by the historic movie palace's new management.

Meanwhile, Another Planet Entertainment, the new management company, will partner with an LGBTQ industry association for construction and architecture as part of the renovation and restoration of the San Francisco movie palace.

APE announced in January that it will be in charge of programming at the theater, which will be expanded to include live music, comedy, and community events in addition to films.

The plans, submitted March 10 to the San Francisco Planning Department for preliminary review by San Francisco-based architecture firm Page & Turnbull as the preservation architect and CAW Architects Inc. as the prime architect, illustrate more significant changes to the historic theater than initially thought. The plans were commissioned by APE, the Berkeley-based concert promoter that manages several historically significant venues around the Bay Area, as well as produces the popular Outside Lands concerts in Golden Gate Park.

While APE has stated it is committed to maintaining the theater's status as a destination for movies, the proposed plans detail changes that physically alter the venue's focus from film-viewing to live entertainment. Banked seats in the main auditorium, for example, will be removed and replaced with tiered platforms for standing audiences. Chairs, or what APE spokesperson David Perry described to the San Francisco Chronicle as "movable, comfortable, flexible seating," would be brought out for films or other events. Perry was not available for an interview when contacted by the Bay Area Reporter.

The theater's concessions stand, which is currently situated in the lobby, would be expanded into two bars, and moved into the theater itself at the back. Other changes include converting the cinema's basement into event space. The balcony seating would remain, although the present seats — worn with age — will be replaced with new ones. Already, some work has been done in the main auditorium, with new lighting being installed on either side of the stage.

The actual work on the renovations is to be organized through BuildOUT California, an LGBTQ business association for the construction and architectural trades. BuildOUT was founded in 2014 after the California Legislature passed, and Governor Jerry Brown signed, Assembly Bill 1678 requiring "regulated California-based energy, water and telecommunications firms to annually report their total procurement with LGBT businesses to the state legislature," according to the group's website.

"The Castro Theatre is a cathedral to the LGBTQ communities," stated Mary Conde, vice president for APE who is in charge of the overall Castro Theatre Project in BuildOUT's news release. "It's absolutely expected and appropriate that we partner with LGBTQ firms as we revitalize this irreplaceable icon for future generations. We're thrilled to partner with BuildOUT moving forward."

Often overlooked in the fields of construction, LGBTQ contractors are getting renewed opportunities through the work of BuildOUT and partnerships such as the one with APE, the release stated.

"As a lifelong San Franciscan, a member of the LGBTQ community and a Latino, the Castro Theater holds a very special place in my heart," stated Nick Colina, COO of Anco Iron and Construction, a third generation San Francisco firm based in the Bayview Hunters Point. "A very special moment in my life was when I got to take my mom, Dr. Colina, to the Gay Men's Chorus on Christmas Eve where we celebrated family and our community! As a gay man in the steel industry a project like the improvements to the Castro Theatre comes along once in a lifetime. To work on a building designed by Timothy Pflueger is a tradesperson's dream."

So far, no estimates for the cost of the renovation have been released but the work, if approved, is expected to take around six months or longer. A project review meeting with the San Francisco Planning Department will take place, probably, March 29 or 30. No plans, however, have been submitted to the historic preservation office, said Historic Preservation Commission Deputy Director Richard Sucre in a telephone call with the B.A.R. March 24.

The plans can be viewed here.