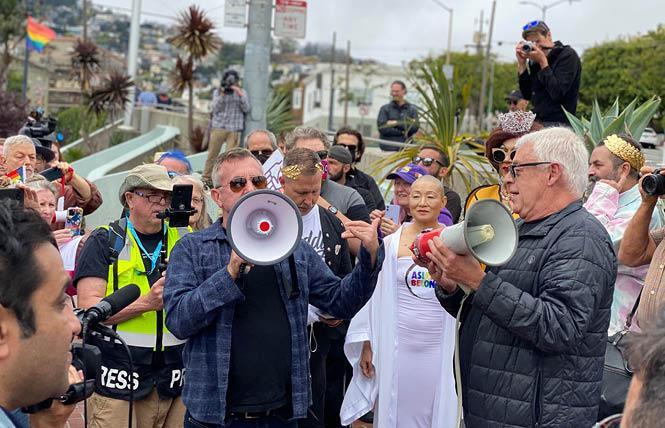 Cleve Jones, right, shown at a 2021 rally in the Castro, will be moving from his longtime home Sunday. Photo: John Ferrannini

Cleve Jones helped build the Castro. Now he's leaving under what he wishes were better circumstances.

"I don't want to leave," the 67-year-old gay longtime activist — who worked with the late Harvey Milk and founded the AIDS Memorial quilt — told the Bay Area Reporter in a recent phone interview. "I came to the Castro in the mid-1970s, and I've moved away for work many times, but the Castro: that's where my heart has always been."

Jones said he isn't leaving under circumstances he wants. Rather, he said he's being forced out by a new landlord who doesn't want him there.

"She literally and metaphorically has a sledgehammer over my head," Jones said. "She's already building around me."

Jones said he wants to bring awareness to his situation not because he needs financial assistance — "I'm going to be fine," he insisted — but for the benefit of fellow San Franciscans who may end up having no choice to leave when they and their landlords butt heads.

"I feel guilty," Jones said. "I don't have the stamina to hunker down and have months in a literal construction zone. She can do whatever she wants. ... She bet she could get me out and she did."

But true to form, Jones isn't leaving the neighborhood without a protest, which will meet at Harvey Milk Plaza at 11 a.m. Sunday, March 27, then walk to Jones' apartment on 18th Street near Diamond Street.

Construction, cameras, and an investigator
The dispute began in recent weeks after the property containing Jones' unit sold to Lily Li Pao Kue, several years after the death of the longtime owner. Jones said he'd lived in the unit for about a decade.

Jones said that he found out the property sold when his roommate's car parked in the driveway was towed. (The driveway had been vacant since the death of the longtime owner.)

"For three and a half years we've enjoyed the privilege of a private parking spot. My roommate had parked there," Jones said. "She called for it to be towed. Neighbors told her 'Don't do that. He lives here.' She began to yell at me that even though she wasn't living there yet, she couldn't leave it on the street where homeless people could touch it, because it's a brand new Tesla."

Kue, who did not give an age and said that she's been with men and women when asked her sexual orientation by the B.A.R., disputed that in a phone interview.

Jones said that Kue told her at that time she'd be moving in and wanted to speak with him about a buy-out.

"I told her she'd have to go through the rent board, and I'd prefer to speak with my attorney," Jones said.

Kue told the B.A.R. that "the rent board was always included."

Subsequently, both sides agree negotiations for the buyout began, and both agree that Kue claimed that Jones' roommate was a subtenant who wasn't allowed to be there due to the terms of the lease.

Jones said that while the lease is for one person, legislation authored by Jane Kim during her time as a San Francisco supervisor means that "it doesn't matter what the lease says; it depends on what the area is zoned for."

Indeed, these protections are in Section 6.15 of the rent board's rules and regulations, amended in 2015.

Jones said that Kue acquired a private investigator, and based on this Kue "claims that I vacated [the unit] and moved to Guerneville."

"As anyone knows, after my book 'When We Rise' was published, we had a small amount of money for a down payment on a very small cottage, under 1,000 square feet, outside Guerneville. No central heating, no air; a place to get away for a while," Jones said. "The hope was to fix it up, but I need to be back in San Francisco because I have serious health issues. Guerneville has many charms, but specialized health care for people with HIV is not one of them."

Jones said that he went to Guerneville to stay safe during the various COVID-19 surges, but that he is still registered to vote in San Francisco, which he considers his residence. He called the issue a "red herring."

"I did spend a lot more time in Guerneville than I expected to because there was this pandemic," Jones said. "She keeps saying I vacated the place. Talk to any of my neighbors."

Kue said that she did not hire a private investigator, but that "I did use my friend, who is an investigator. She does this for fun, not professionally. She's very good at what she does," and that this investigator determined Jones lives in Guerneville.

To that Jones said, "It wasn't a secret." (In several articles in 2020 the B.A.R. mentioned that Jones was living in the North Bay resort area long favored by gay men.)

Jones said that Kue put cameras on his unit and started construction. Kue said the cameras are due to the construction and can't see inside Jones' unit.

"I have cameras pointing at the porch," Kue said. "It does not go into the door and window. Everything points at the common, shared area. It is within my landlord rights to point it at the common areas, for security. I have a lot of contractors coming and going."

Decision to leave
To prevent the conflict from becoming protracted in court, Jones made the decision to leave. He said he is lucky to have enough means to live elsewhere, but he wants to bring awareness to the situation because many people live at the mercy of their landlords.

"People need to pay attention because even with all my unearned advantages of race and gender, political connections, and sound legal advice — none of that was sufficient to keep me in my house," Jones said.

Jones, who works for UNITE HERE, the hospitality union, said he asked a co-worker what would happen to an average member of the union they work for if this had happened to them.

"They'd sleep in their cars," Jones recalled them saying. "This is the loss of a rent control unit forever."

Kue said she's living in the house, which Jones said he doesn't think is happening.

"I see no evidence," Jones said. "I suppose it's conceivable she's up there on a yoga mat, but I don't hear her at night and I see her drive away in the afternoon."

Jones believes Kue plans to put the house on Airbnb.

Kue said she filed a police report on Jones, which she shared with the B.A.R., after a Facebook follower of Jones' urged him to "drag her by name publicly" and others suggested protests.

"I'm genuinely scared for me, my family, and property," she said.

"Please tell the public not to use violence. That's all I want — safety for me and my family at this point," she stated via email.

Jones said he couldn't imagine why Kue would want to file a police report on him.

'Emblematic'
Kue said that she feels Jones is avoiding a rent board proceeding because he'd lose. She said that she is "not a wealthy individual who came into privilege and entitlement."

Jones said that he hopes Sunday's protest will draw attention to ways landlords can get tenants to leave, and said it's particularly troubling in tenant-heavy communities such as the Castro.

"For gay men of my generation, we are a really vulnerable population," Jones said. "The majority of us did not retain the affection and support of our biological families. Few of us at the time had children, and people with children from previous relationships often lost them. The most productive years of our lives we spent on the frontline of a horrible pandemic that killed 20,000 of us in San Francisco alone when we should have been saving and investing. It's very, very sad."

Gay District 8 Supervisor Rafael Mandelman, who represents the Castro on the board of supervisors, said he would be speaking at Sunday's event.

"Cleve is a queer living legend," Mandelman said. "The fact that he is being displaced from his longtime home in the Castro is upsetting and all the more so for being emblematic of the displacement of so many other queer folks from their longtime homes in neighborhoods like the Castro."

Jones will be leaving Castro neighborhood home after all
Sign up!