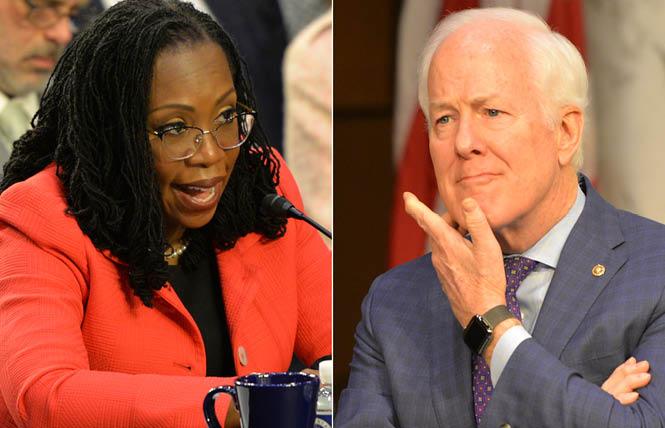 The U.S. Supreme Court ruling for same-sex marriage — issued nearly seven years ago in 2015 — is considered settled law and in the rear-view mirror of history for many Americans, but Senator John Cornyn (R-Texas) opted to press Ketanji Brown Jackson on the decision as an example of policy-making from the bench in questions during her confirmation hearing.

Jackson, nominated by President Joe Biden to serve on the U.S. Supreme Court, stood firm March 22 in response to the questions despite lamentations from Cornyn the decision found a due process and right for same-sex couples to marry that overruled the will of the people who voted to ban gay nuptials in his state.

"That is the nature of a right," Jackson replied. "When there is a right, it means that there are limitations on regulation, even if people are regulating pursuant to their sincerely held religious beliefs."

In the nearly 15-minute exchange between Cornyn and Jackson, the Texas Republican pressed her on the expansive interpretation by the courts of due process and equal protection clauses, which he said led to Supreme Court decisions condemned to the dustbin of history like Dred Scott v. Sandford and Plessy v. Ferguson. The Dred Scott decision, in 1857, said that all people of African descent, free or enslaved, were not United States citizens and therefore had no right to sue in federal court. The Plessy v. Ferguson case, in 1896, upheld the constitutionality of segregation as long as such facilities were equal in quality, which came to be known as "separate but equal."

Cornyn, however, also included with those rulings the 2015 decision in Obergefell v. Hodges, which he said was a "dramatic departure from previous laws in the states and in the nation." (Cornyn throughout the questioning had difficulty pronouncing the name "Obergefell," which at least one time he called the "Ober-fell" case.)

"In the opinions that were written there at the time, it was noted that here we are 234 years after the Constitution had been ratified, 135 years since the 14th Amendment had been ratified, that the Supreme Court articulated a new fundamental right, which is a right to same-sex marriage," Cornyn said.

Cornyn recalled at the time 11 states and D.C. had legalized same-sex marriage, but said 35 states had put the question on the ballot and 32 had decided to "maintain the traditional definition of marriage between a man and a woman."

The Texas Republican went on to describe the issue as not just an overriding the will of the states and the people, but also major religions, and asked Jackson if she agrees "marriage is not simply a governmental institution, it's also a religious institution."

When Jackson replied, "Well, senator, marriages are often performed in religious institutions," Cornyn followed up with questioning on whether she agrees many major religions, including Christianity, Judaism, and Islam, have defined marriage as one man, one woman (ignoring denominations within those religions, such as Episcopal and Presbyterian churches, that recognize and wed same-sex couples).

Jackson wouldn't engage with Cornyn beyond what was directly necessary: "I am aware that there are various religious faiths that define marriage in a traditional way."

That's when Cornyn framed the Obergefell decision as stepping up a conflict between religious views and the decision of the court.

"Do you see that when the Supreme Court makes a dramatic pronouncement about the invalidity of state marriage laws, that it will inevitably set in conflict between those who ascribe to the Supreme Court's edict and those who have a firmly held religious belief that marriage is between a man and a woman?" Cornyn asked.

Jackson, as is customary for a nominee up for a seat on the Supreme Court, declined to offer her views, pointing out "these issues are being litigated, as you know, throughout the courts" and therefore she was limited in what she could say.

But Cornyn wouldn't up let up, pressing Jackson again on the Obergefell ruling. Jackson responded the "nature of the right" found the U.S. Constitution trumps regulation "even if people are regulating pursuant to their sincerely held religious beliefs."

Cornyn continued his questioning by asking whether the concept of marriage is enshrined in the Constitution, drawing on the dissents from Chief Justice John Roberts and Associate Justice Samuel Alito lamenting opponents of same-sex marriage will be labeled as bigots.

More broadly, Cornyn went on to lament the substantive due process rights found by the courts as "another way for judges to hide their policymaking under the guise of interpreting the Constitution."

Jackson gave an answer demonstrating her knowledge of case law, saying courts have found the right to due process to mean "not just procedural rights relative to government action but also the protection of certain personal rights related to intimacy and autonomy."

Cornyn interjected the same interpretation led to the Dred Scott decision, citing "treating slaves as chattel property" as another outcome of the expansive interpretation of the due process clause.

After more questioning from Cornyn on whether "you can use substantive due process to justify basically any result whether it's conservative or liberal, libertarian, or conservative," he went on to ask Jackson whether she can understand "why ordinary folks wonder, Who do these people think they are? And where does this authority come from?" Jackson, in response, kept her answer simple: "Absolutely, senator, I do understand it."

It should be noted the Supreme Court has rejected subsequent legal claims to overturn the Obergefell decision, or even to chip away at the decision. Even with the 6-3 conservative majority on the Supreme Court, justices in 2020 declined to hear a case brought by Indiana seeking to challenge the decision on the basis of birth certificates for the children for women in same-sex marriages. Alito, however, and Associate Justice Clarence Thomas have declared war on Obergefell, writing in a filing two years ago the ruling falls short in accommodating religious freedom.