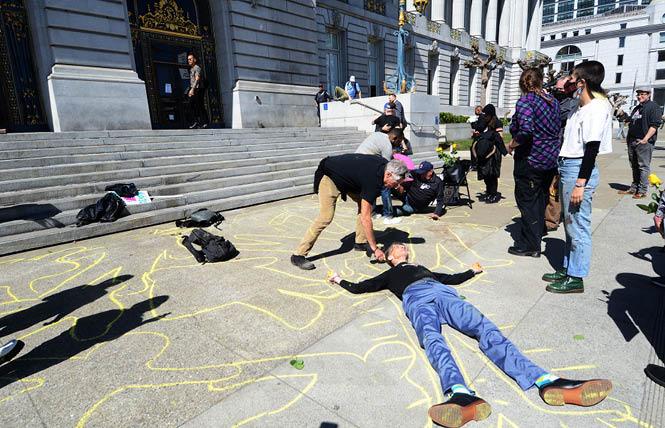 Paul Aguilar, forefront, gets his body outlined as activists stage a "die-in" outside of San Francisco City Hall as part of a Back to HIV rally to highlight the continuing needs of HIV patients. Photo: Rick Gerharter

About 40 people met for the March 21 action.

Several speakers addressed the audience, all with passion but some with heart-wrenching fervor, as members of wedding parties carefully slipped in among the protesters to climb the stairs to their events inside City Hall. One lone man, protesting who knows what, stood across the street from the rally, shouting through a bright orange construction cone about the government, COVID, the EPA, the CIA, and California's non-existent fleet of stealth bombers. His shouting continued throughout the demonstration but those addressing the rally from the steps simply raised their voices, never quite drowning him out but keeping the attention of the audience, nonetheless.

Organized by Paul Aguilar, HIV chair of the Harvey Milk LGBTQ Democratic Club, Monday's event was a call to the city's Department of Public Health to return to its earlier, pre-COVID focus on HIV. Over the course of the pandemic, San Francisco's promising HIV statistics began to slip, and Aguilar, in an earlier interview with the Bay Area Reporter, decried what he said was the city's "lack of attention."

Statistics from the city's 2020's HIV Epidemiology Annual Report, issued last year by the San Francisco Department of Public Health, show some alarming numbers concerning HIV, particularly in regard to the impact of COVID on HIV care in the city.

Compared with 2019 — before COVID — screening for HIV fell by 44% from March 2020 to March 2021. Viral suppression fell from 75% of people living with HIV to 70%; for the city's homeless, those figures are even more dramatic with viral suppression rates falling to just 20% from 39%.

Those who turned out for the rally, including gay District 8 Supervisor Rafael Mandelman, the board's only LGBTQ member who represents the Castro LGBTQ neighborhood, and District 9 Supervisor Hillary Ronen, who represents the Mission (their attendance was unexpected, Aguilar later told the B.A.R.), as well as gay former supervisor David Campos who is currently campaigning for the 17th Assembly District seat, called upon city officials to not only increase funding for HIV care but also other issues such as housing and safe consumption centers.

Some attendees, like Bruce Ivie, who came with his husband, David Bowers, were there to show support, despite trying to prepare for a trip out of the country for several weeks.

"HIV and AIDS is still just as big an issue in the city," said Ivie, sitting on a portable stool as he watched the event come together.

Others like Megan Rohrer, who is a bishop in the Evangelical Lutheran Church in America, was present because, they said, as a transgender religious leader "we have to continue to remind people of the importance of HIV and AIDS and the ways that we still need a cure, still need treatment, and in particular, we need treatment and care for people who are low income and homeless."

Although she was last to address the crowd, and probably gave the shortest remarks, Dr. Monica Gandhi, director of Zuckerberg San Francisco General Hospital's Ward 86, was the event's keynote speaker. Her message was direct.

"I'm so happy we're all here to bring attention back to HIV," Gandhi said. "Essentially there are 37.7 million people still living with HIV worldwide, and we have always done great with HIV in this city but, understandably, the COVID pandemic distracted us from other goals."

Gandhi has also been in the forefront of medical voices during the city's COVID crisis.

In order to get back on track, she called on the crowd to return their attention to "the four pillars of HIV control" including testing, pre-exposure prophylaxis or PrEP, treatment, and outbreak testing and outbreak control, particularly in light of "increasing substance use in the city and the increase in overdose deaths."

Gandhi said she hoped to work with everyone in the crowd, as well as the city's myriad HIV organizations, to bring attention back to the disease.

"This is a city that has always worked so well together on HIV," she said, "and now this is the day that we start bringing our attention back to this."

Mandelman acknowledged the decline in the city's promising pre-COVID statistics.

"We also know that, in our response to COVID, some of our very important other priorities have been pushed aside," Mandelman said during his remarks. However, despite advances made before the pandemic, he noted, rates of transmission among Latino and Black men, as well as transgender women, "were not matching the progress that we were having among other subpopulations of folks who were at risk for HIV, and we had tremendous work to do before the pandemic.

Memories
Despite the numerous calls for additional funding and greater focus on HIV care, others sought to remind the crowd what the early days of AIDS had been like and what they hoped to avoid repeating. Harry Breaux, a gay man and long-term HIV survivor, dressed in a dazzling white sport coat spotted with blood-red roses and a floppy white hat to block the sun, read the poem "Tornado," by his friend Hank Trout.

"The 80s were one, long violent tornado/lightning seared our eyes with the sight/of lesions, purple brown yellow volcanic craters on tissue-thin flaky white skin/veined red and blue like hellish roadmaps," Breaux began and, a few minutes into the poem, the lone protester fell silent. It wasn't, as one might have thought because of the mournful beauty of Breaux's reading but, instead, to have a drink to ease his, no doubt, hoarse throat.

Another speaker, identified only as Junebug, climbed the stairs to speak when it was announced that Gandhi was running late but had found parking and was on her way. Junebug, who had come to the event to do outreach for hepatitis C awareness, was filled with fury and drive and despair. Small, wiry, dressed entirely in black with a black knit cap, she called out to the audience.

"Silence is a form of violence," she told the crowd. "We need support, we need healing, we need our community, we need to stop stigmatism because that kills us and keeps us in isolation."

"When we're in silence, it's a form of prison," she continued. "And that prison leads us to death. But I believe we can break that silence and today we are here breaking that silence!" she cried out to cheers from the audience.

As Junebug continued speaking, her voice rose with passion, and she grabbed the microphone, shouting out to the audience, "But sound and support and treatment and a cure equals what?"

"Life!" the crowd fired back.

"Equals what?" she demanded.

Junebug's voice fell, trembling, as she told the audience her father had died the previous week, and she believed if he had gotten treatment, he'd still be alive. "If that's the reality, our communities are living in silence and dying alone." She sobbed. "People are living in garbage and it's not OK. It's our responsibility to take care of each other. We are each other's keeper. I'm your keeper and I'm here to break the silence. And I'm going to do something. I will break the silence."

The audience was visibly moved.

The event wrapped up with a group photo and the die-in. Several people found themselves laying on the sidewalk before the City Hall steps as others drew bright yellow outlines around their prone bodies and then added their names. And, then, the crowd drifted away. Even the lone protester had left.