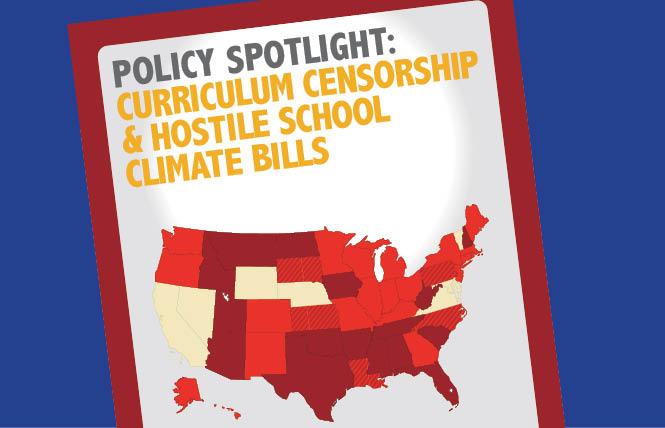 A virtual blitzkrieg on public education by right-wing groups and their sympathizers is being launched throughout the United States, and LGBTQ children and children of color are bearing the brunt of their attacks, according to an organization that tracks such legislation.

As of March this year, at least 220 hostile school climate and curriculum bills have been introduced into state legislatures around the country, according to the Movement Advancement Project, a nonprofit think tank based in Boulder, Colorado. That's more than the previous two years combined.

From Florida's notorious "Don't say gay" bill, which is now awaiting Republican Governor Ron DeSantis' signature, to Texas Governor Greg Abbott's (R) efforts to criminalize gender-affirming care for his state's trans kids and their families, hostile bills that would restrict or even censor inclusive curricula have made their way into legislatures and onto governors' desks throughout the United States. These bills would "ban or severely limit what schools can teach about race, racism, history, sexism, and LGBTQ people and issues, without regard for educational standards," according to MAP. These efforts, further, would take curricula out of the hands of educators and allow them to be shaped by the political motivations of politicians.

This is despite increasing evidence that the majority of Americans support nondiscrimination protections for LGBTQ people, according to a poll released March 17 by the Public Religion Research Institute.

"Approximately eight in 10 Americans (79%) favor laws that would protect gay, lesbian, bisexual, and transgender people against discrimination in jobs, public accommodations, and housing," the survey found. "Support for these protections has increased eight percentage points since 2015 (71%)."

The survey was designed and conducted by PRRI among a total sample of 22,612 adults, ages 18 and up, living in all 50 states in the United States.

Much of the move to censor what is taught to American kids stems from the fact the U.S. is gearing up for midterm elections in November, said Logan Casey, a senior policy researcher at MAP.

"This is actually an old tactic," Casey, a queer transgender man, said in a phone interview from St. Louis. "We shouldn't be surprised that this uptick is happening right now because it's an election year."

The variety of legislation has made it a challenge to track, he said, but his organization has followed bills in 42 states, affecting 80% of American youth, or 59 million young people. The legislation has ranged from efforts to ban the use of the New York Times' "1619 Project," which documents the history of chattel slavery in the United States from the arrival of the first slaves in 1619 and its impact and central role in American history, to the usual efforts to ban books some parents might object to because they contain language or subject matter they don't feel is appropriate for kids.

Of course, not all of it is simply an effort to control curricula. Hostile school climate bills — banning transgender kids from participating in school sports, for example — were introduced in 37 states, with eight states — Alabama, Arkansas, Florida, Idaho, Mississippi, Montana, Tennessee, and West Virginia — actually passing them, according to MAP.

Even if the bills never get passed, they're still harming kids, said Logan.

"The school environment or climate is just as important to children's social, emotional, and academic success as the curriculum itself," MAP's report, 'Curriculum Censorship & Hostile School Climate Bills,'" stated. "For example, a national 2019 survey showed that LGBTQ students who experienced discrimination at school had higher levels of depression, had lower GPAs, and were more likely to have missed school in the past month because they felt unsafe."

While none of these censorship or anti-LGBT pieces of legislation has arisen in California, the Golden State, too, has seen efforts by Republican lawmakers to introduce a parental rights bill. Florida's "Don't say gay" bill, HB 1557, is titled Parental Rights in Education. California's bill, Assembly Bill 1785, is presented as a tool for empowering parents and the proposed legislation gives license to parents to censor proposed curricula although it does not mention LGBTQ materials or specifically ban teachers from discussing sexuality, LGBTQ, or racial issues. Introduced by Assemblymember Laurie Davies (R-Laguna Niguel) on February 8, the bill is co-authored by seven other Republican Assembly members, and by state Senator Brian Dahle (R-Bieber), who announced his candidacy for governor the same day. Davies did not respond to a request for more information on the proposed legislation.