Out in the Bay: Queens read celebrity autobiographies this Sunday in SF 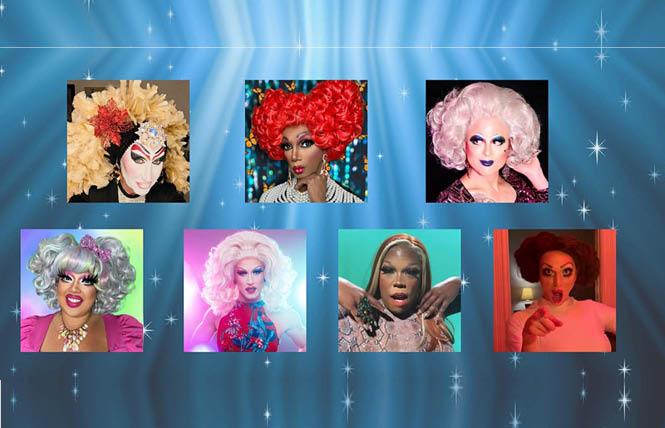 Out in the Bay — Queer Radio is back from a brief hiatus, and on this week's edition: "Literary readings with really, big, gigantic martinis!" That's how our guest poet and author James Siegel describes "Literary Speakeasy," a live literary show he founded in 2015. In the years since, hundreds of poets, authors, and songwriters from across the Bay Area have featured their work and connected directly with fans at Martuni's, a piano bar at the corner of Market and Valencia streets in San Francisco. Siegel said, "Getting out there and meeting people is what it's all about."

Literary Speakeasy's show called "Queens Read Celebrity Autobiographies" began in 2016 and quickly outgrew its home at Martuni's, moving into the much larger Oasis nightclub in the city's South of Market neighborhood. Each year the event draws humor from the scandals and silliness in the pages of celebrity autobiographies complete with drag queens, go-go boys, and raffle prizes. This year's event features drag royalty like Sister Roma, Bebe Sweetbriar, Snaxx, Afrika America, Mary Lou Pearl, Carrie Fisher-Price, and our other guest, Elsa Touche.

At "Queens Read Celebrity Autobiographies," the presenters read directly from a memoir while adding their own hilarious flare. In the past Jenna Jameson, Vanna White, Bette Davis, Elizabeth Taylor (read by Touche) and others have gotten the drag treatment. This year Touche is reading the memoir of D-list actress Liz Reney and said, "She talks about the men that she slept with in Hollywood in exquisite detail. It's always fun to hear juicy gossip about Burt Lancaster, darling! When was the last time he came up in conversation?"

This year's event promises to be a riot and benefits an organization called Foglifter Press, a San Francisco-based nonprofit that celebrates the literary work of queer writers, with a focus on underrepresented voices from across the country. The proceeds from the reading will go directly to Foglifter Press.

Also on this episode of Out in the Bay, reporter Lusen Mendell takes us to a backyard barbecue for a lesson in pronouns.

Hear more from Touche and Siegel on this week's Out in the Bay. The program airs at 5 p.m. Friday, March 18, on KALW, 91.7 FM SF Bay Area-wide and at 8:30 a.m. Saturday, March 19, on KSFP, 102.5 FM San Francisco only. It is always available on Out in the Bay's website, where you can learn more about Out in the Bay-Queer Radio and hear past shows.

Christopher J. Beale, who produced and hosts this week's Out in the Bay, is a queer independent radio host, producer, and journalist based in San Francisco. He also produces and hosts the "Stereotypes" podcast and contributes to the Bay Area Reporter.

Out in the Bay: Fauxnique pens 'Faux Queen: A Life in Drag'