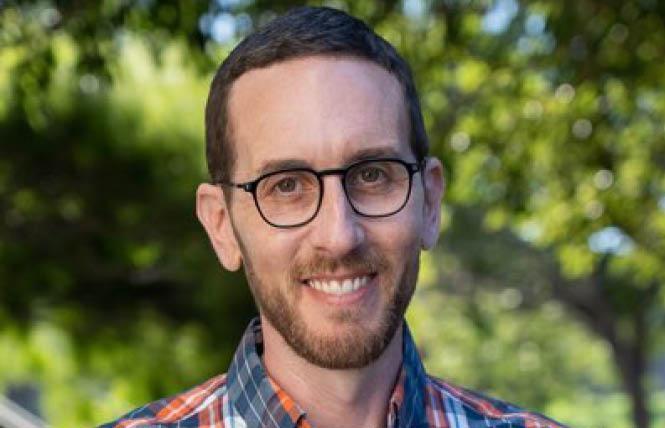 Standing in front of a background of fluttering pink, white, and blue transgender flags and signs held by a crowd of young people from the Sacramento LGBT Community Center on the steps of the state Capitol, gay state Senator Scott Wiener announced he would introduce legislation to make California a refuge for trans kids and their families persecuted by their own governments in states such as Texas and Idaho.

Wiener, a San Francisco Democrat, was joined at the March 17 news conference by numerous supporters including three Assemblymembers and representatives from Equality California and Planned Parenthood. According to an earlier news release from his office, Wiener said the planned legislation would provide protection to trans kids and their families if they come to California from states "criminalizing the parents of trans kids for allowing them to receive gender-affirming care."

Wiener's move is a direct rebuke to Texas and Idaho, where trans kids and their parents have found themselves vilified by hostile state governments seeking to prosecute parents for providing health and other forms of gender-affirming care for their children.

On February 22, Governor Greg Abbott (R) sent a letter to the commissioner of the Texas Department of Family and Protective Services, calling on the agency to "conduct a prompt and thorough investigation of any reported instances of these abusive procedures in the state of Texas." The letter followed an opinion issued the previous week by Texas Attorney General Ken Paxton (R), in which he equated treatment for trans kids with child abuse.

The Texas Tribune reported March 11 that a state judge has temporarily blocked Abbott's directive, stating that it is "beyond the scope of his authority and unconstitutional." The statewide injunction will remain in effect until a July hearing on the matter, the paper reported.

On March 8, the Idaho state House of Representatives passed House Bill 675, which would make it a felony to provide gender-affirming care to transgender youth. The party-line vote was 55-13. That bill has since moved to the state Senate but Reuters reported March 16 that the Senate has blocked the bill. According to the news agency, Republican lawmakers said the bill undermined parental rights even as they affirmed their opposition to any kind of trans-related medical care.

"We know other red states will, no doubt, be considering these bills as well," Wiener told the crowd. As soon as one state considers adopting anti-LGBT legislation, "They all copy each other and it spreads like wildfire around the country."

Such legislation, he added, "means death for transgender kids."

Other speakers also spoke. Gay Assemblymember Evan Low (D-Campbell) reminded the proponents of anti-LGBTQ legislation that trans kids are "not a statistic. These are people. These are human beings. This is about gender-affirming care to be true to ourselves."

Lauren Polido, a trans person who is co-executive director of Gender Health Center in Sacramento, told the assembled crowd that he could not imagine not having access to the kind of care being denied to trans kids in other states.

"I know how life changing this experience can be," Polido said. "Our trans siblings in Texas deserve that freedom."

Alexis Sanchez, director of advocacy and training for the LGBT Community Center in Sacramento urged people to oppose the attacks on transgender care in other states.

"Every day we see the impact that anti-LGBT legislation has on youth locally," she said. "The purpose of this bill is to keep families together and save transgender lives.

In an earlier email to the Bay Area Reporter, bi Assemblymember Alex Lee (D-San Jose), a co-author of the proposed legislation stated, "The rights and lives of trans youth are under attack throughout the country by bigotry. With this bill, we are making it clear that California will not abide to out-of-state subpoenas, and that we will continue to welcome trans, gender-nonconforming, and intersex people."

At the news conference Lee said that trans kids "should be able to make these decisions on their own terms. We are making it clear that this state will not be complicit in the assault on trans youth and their families."

It would reject any out-of-state court judgments removing trans kids from their parents' custody based on the parents allowing their kids to receive gender-affirming health care, per California public policy, and would prevent those judgments from being enforced in California courts. Families who come to California will be protected from having their trans children taken away from them.

While some states are considering legal moves that would extend their reach to their residents who go out of state for gender-affirming care, Wiener's proposed legislation would "bar compliance in California with any out-of-state subpoena seeking health or other related information about people who come to California to receive gender-affirming care," according to the release, "if the subpoena relates to efforts to criminalize individuals or remove children from their homes for having received gender-affirming care."

And, finally, the planned legislation would declare it "California's public policy that any out-of-state criminal arrest warrant for someone, based on violating another state's law against receiving gender-affirming care, is the lowest priority for law enforcement in California."

"With this bill, California will continue to be a leader in protecting the civil rights and basic dignity of LGBTQ people and will help trans kids and their parents have a safe place to go if they are threatened with prosecution or criminalization for being who they are and seeking the care they need," the release stated.

Equality California Legislative Director Tami Martin, one of the last to address the crowd, said, "We will not allow other states to hunt our community within California's borders... This new legislation is a rejection of discriminatory legislation everywhere."