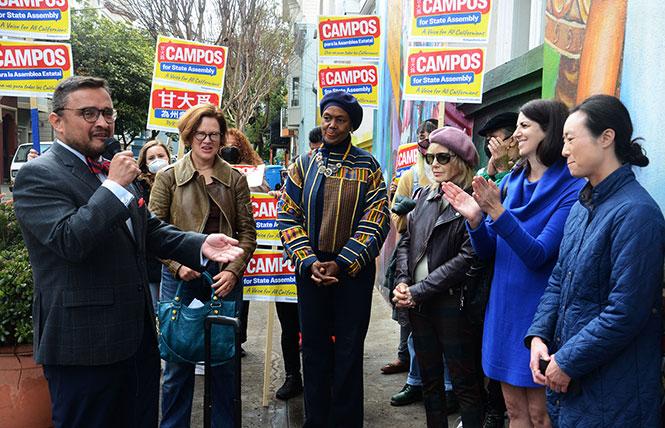 David Campos got a boost in his campaign for the 17th Assembly District race Tuesday when former candidate Thea Selby, who finished fourth in last month's primary, endorsed him.

Campos, a gay man and former San Francisco supervisor, faces District 6 Supervisor Matt Haney in the April 19 runoff. The winner will finish the term of former assemblymember David Chiu, who resigned the seat last November to become San Francisco's first Asian American city attorney. Campos told the Bay Area Reporter in a recent interview that he finished about 700 votes behind Haney and feels good about his chances.

The term ends in December, so the Assembly race will also be on the June primary and November general election ballots for a full two-year term.

Bilal Mahmood, a former Obama administration official who finished third in the race, endorsed Haney. Recent polls have also shown Haney with an edge in the race. The Alice B. Toklas LGBTQ Democratic Club endorsed Haney March 14, according to an email the club sent out. The club did not take a position in the primary election.

Selby said that she met with Haney.

In an email, Haney stated, "I admire Thea's dedication to serving our community and respect her decision."

Regarding the Alice club's endorsement, Haney said it was "an honor."

"I'm proud of the broad coalition we're building and I'm ready to tackle San Francisco's biggest challenges, including the housing crisis, homelessness, public safety and climate change," he stated. "I am also committed to being a champion for the LGBTQ community, protecting civil rights, ensuring safe and supportive schools, and expanding access to health care and housing for LGBTQ residents."

On Tuesday Campos was focused on turning out his voters for the general election runoff, for which mail-in ballots will be sent out next week. Joining Campos and several other women political leaders outside the Women's Building March 15, Selby said that he "takes women seriously" and pointed out that he has worked with many female leaders during his time as a San Francisco supervisor.

"David's track record is pretty good," Selby, a trustee on the City College of San Francisco board, told the B.A.R. in a phone interview prior to the announcement. "These things matter." She explained that Campos encouraged Hillary Ronen, his former legislative aide, to run for the District 9 seat when he was termed out. Ronen won election in 2016 and was unopposed for her reelection in 2020.

Selby, who was the only woman in the Assembly primary race, said that what she's looking for "is character."

"Someone who will actually ask different constituencies what they think," she told the B.A.R. "Someone who did that very well was David Chiu."

Campos ran for the Assembly in 2014 but came up short against Chiu, also a former city supervisor. Currently Campos is on leave as chief of staff to San Francisco District Attorney Chesa Boudin, who faces a recall vote in June.

In the interview, Selby was asked if she was going to help with get-out-the-vote efforts for Campos. "I'm going to see how I feel," she said. "I generally do kind of go all-in and I'll certainly be letting my folks know I'm endorsing David."

At the event, held on Equal Pay Day, which symbolizes how far into the year women must work to earn what men made in the previous year, Ronen pointed out women still earn less money than men and that there's an even greater discrepancy when it comes to women of color.

"I believe he is the best candidate for women," she said.

Ronen said that Campos understands the importance of families and working moms. "We worked on women's issues constantly," she said of her time as his legislative aide. "Planned Parenthood was in our district and David pushed boundaries to make sure we created a bubble zone so women were not harassed."

She also said that Campos is a champion for families.

District 1 Supervisor Connie Chan was at the event. She pointed out that a lot of essential workers are women. Former District 10 supervisor Sophie Maxwell said that experience matters.

Migden also noted that Campos was the driving force behind getting Terminal 1 at San Francisco International Airport named for Harvey Milk, the first gay person elected to office in San Francisco and California. She said that she gets tears in her eyes when she travels and goes through the terminal.

"This man comes from the community," Migden said, adding that he would be a great leader on LGBTQ issues. She pointed to the many states that have eroded rights for LGBTQ people through various laws.

"We'll have to send San Franciscans all over the country to help undo these fascist laws enacted by these states," she said.

For his part, Campos said the election is about change.

"LGBTQ people and people of color have a special connection to women," he said, adding that his people-powered, corporate-free campaign means he's not obligated to wealthy donors or organizations.

"I'm beholden to you," he said. "Women are going to decide this election. There are 35 days left — let's go win this."

Updated, 3/16/22: This article has been updated with comments from Assembly candidate Matt Haney.