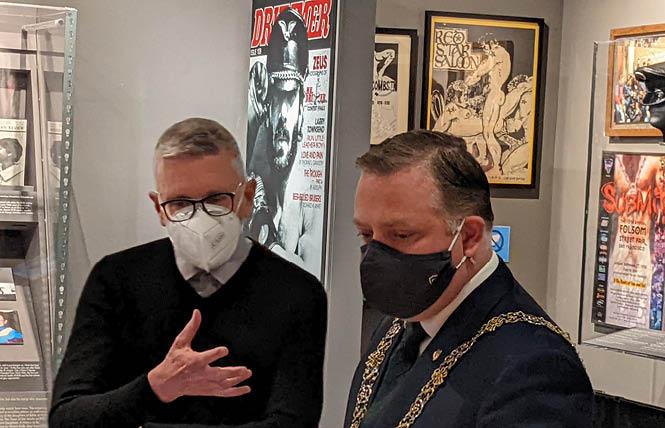 Gerard Koskovich, left, a queer historian and former board member of the GLBT Historical Society, guides Cork, Ireland Lord Mayor Colm Kelleher on a visit of the society's museum in the Castro March 11. Photo: Eric Burkett

Like a lot of visitors to the GLBT Historical Society Museum, Colm Kelleher, Lord Mayor of Cork, Ireland, said he was most impressed with one exhibit in particular, the bloodstained jacket worn by the late gay leader and San Francisco supervisor, Harvey Milk, when he was fatally shot in his City Hall office in 1978.

It's a powerful exhibit, to be sure, and probably one that leaves a lasting impression on a lot of elected officials and others who see it.

The museum was just one of several visits the mayor would be paying to various sites around San Francisco, including a stop at City Hall where he joined Mayor London Breed at a reception where they raised the Irish flag ahead of St. Patrick's Day. As he toured the small museum in the city's LGBTQ Castro district on the morning of March 11 with members of the museum's staff, employees of the Irish Consulate General, and some of his own staffers, as well, the young politician — he was 35 when he was elected by Cork City councillors to the office in 2021 — seemed visibly moved by much of what he saw.

He recounted the time he heard from friends that his best friend, a man he'd known since childhood, was gay. If it was true, Kelleher, a straight ally, said, he had been the last to hear of it. Concerned, he flew from Ireland to London where his friend was living at the time to find out.

It was true, his friend told him. He'd been afraid to say anything to Kelleher, a fact that cut deeply.

"When he came out to me," said Kelleher, "it was a real eye-opener for me."

The Ireland both men had grown up in was, as Kelleher said, a very repressive society. Those experiences helped make him into "a very open-minded person," he said.

Kelleher, wearing the ornate chains of office around his shoulders that denoted him as Lord Mayor, was guided through the museum by Gerard Koskovich, a founding member of the GLBT Historical Society and queer historian. As they made their way from one exhibit to the next, they paused in front of the display containing a segment of the original 1978 rainbow flag that was created by the late Gilbert Baker and his friends Lynn Segerblom and the late James McNamara. As it happens, the rainbow flag plays a key role in the relationship between the two cities.

Cork, Ireland's second largest city, is in many ways to Ireland what San Francisco is to the United States: the epicenter of LGBTQ liberation. Cork, Kelleher proudly told the crowd, was the first city in Ireland to fly the rainbow flag over its City Hall in 2014, a flag donated, incidentally, by late San Francisco Mayor Ed Lee. By then, the two cities had been sister cities for decades, a relationship begun under then-mayor Dianne Feinstein. In 1970s and 1980s, Cork was home to numerous organizations and efforts to bring about LGBTQ equality in Ireland, as well as its oldest gay bar.

But it's the flag that seems to bind the two cities together in a very visible, symbolic way.

"Under a special provision in local law, Cork flies a rainbow flag donated by San Francisco over the Cork Town Hall for Pride Month," stated Noeleen Tobin-Pattison, executive board member of the San Francisco-Cork Sister City Committee, in an email to the Bay Area Reporter.

As the B.A.R. previously reported, last year San Francisco and Cork officials raised twinned versions of the Progress pride flag at their city halls on Sunday, May 16, in observance of an international day that raises awareness about LGBTQ issues. For the sister cities since 1984, it was the first time that version of the Pride flag was flown at the respective city halls.

Daniel Quasar designed the Progress pride flag in 2018 by combining versions of the Philadelphia and the transgender pride flags. The Philly version includes black and brown stripes at the top of the flag in addition to the standard six colors of the rainbow.

It was also the first time either municipality had worked in tandem with another city to simultaneously raise the LGBTQ symbol at its city hall. The flag-raisings took place a day ahead of the International Day Against Homophobia, Transphobia, and Biphobia, which is observed each May 17 in scores of countries around the globe.

The relationship between Cork and San Francisco includes a great deal of work to bring both cities' LGBTQ communities together, as well. In 2018, they signed a memorandum of understanding, or MOU, "to pursue exchanges and cooperation in areas that increase awareness and inclusivity for programs and services that meet specific and unique needs of the LGBTQI+ community."

The visit to the GLBT Historical Society Museum was more than just a nice visit to a local museum. The society hopes to connect its efforts with those of the Cork LGBTQ archives. Koskovich, a former board member of the historical society and archivist, and Cork archives co-founder, Orla Egan, have already worked together on projects, according to Tobin-Pattison.

More is planned on a grander scale. Under the watch of the San Francisco-Cork Sister City Committee, the San Francisco Human Rights Commission, the San Francisco Office of Transgender Initiatives, the Social Inclusion Unit Cork City Council, and Cork City LGBT Inter-Agency Steering Group this MOU will set forth a course for both cities to exchange information and best practices related to each cities' LGBTQI+ programs, policies, and initiatives, Tobin-Pattison stated in the email. And they want to encourage visits between representatives of San Francisco and Cork's LGBTQI+ public and private organizations.

But that's all the official stuff. By about 11:30 a.m., the Lord Mayor's visit to the museum was over. He was off to his next official stop as regular museum visitors, none of whom were wearing chains of office, made their way inside.

LGBTQ Agenda: Nearly 60,000 adolescents would be harmed by anti-trans laws in US, report says
Sign up!