SF mayor swears in 3 women to school board 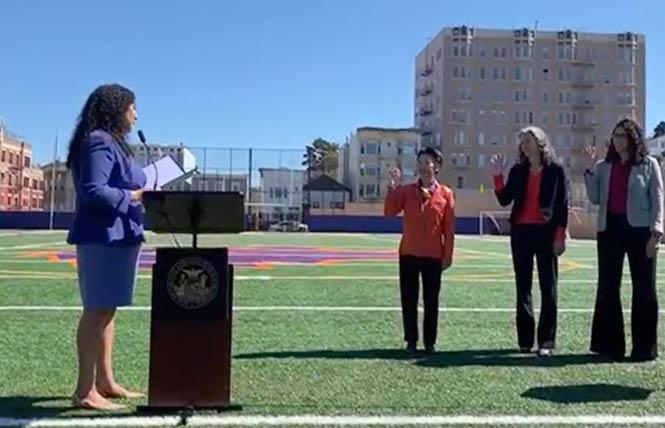 Mayor London Breed on Friday swore in three women as the newest commissioners on the San Francisco Board of Education, replacing the members who were ousted in last month's historic recall.

None of the women is LGBTQ, but all are parents of students attending public schools in the district. Ann Hsu, Lainie Motamedi, and Lisa Weissman-Ward each pledged to work hard with the four other board members to have the San Francisco Unified School District "turn a page," as Hsu said during her remarks.

Breed made the announcement and swore in the new commissioners on the football field of Galileo Academy of Science and Technology, which Breed attended when it was known as Galileo High School. She said deciding who to appoint to the school board was difficult.

"It's probably the hardest decision I've made as mayor," she told an audience of assembled officials and others. "I think about my time at Galileo and can't help but think about what kids went through during the pandemic."

"Looking forward to getting to know them but they seem like excellent choices," he wrote in a text message.

The three women must run in November to keep their seats. The San Francisco Chronicle reported that all said they would seek election.

The COVID-19 pandemic and the closure of schools for over a year was a driving force behind the recall, as parents became fed up with the previous board's actions on other matters like renaming 44 schools with little accurate research (a decision it later rescinded) while students were stuck at home doing remote learning. Ultimately, voters overwhelmingly recalled former board president Gabriela López and Commissioners Faauuga Moliga and Alison Collins. Moliga resigned the day after the election. The last day for López and Collins was March 11. The Chronicle reported that neither attended their last school board meeting March 8.

Hsu, who was born in China, lives in the Richmond district. She is president of the Galileo High School PTSA and chair of the district's Independent Citizens' Bond Oversight Committee, according to a news release from the mayor's office. She has a bachelor's degree in electrical engineering from Penn State University and a master's degree in electrical engineering and MBA from UC Berkeley.

She has strong connections to San Francisco's Chinese community dating back to the 1990s when she was an active member of the San Francisco-Shanghai Sister City Committee. Hsu worked for over 20 years in the tech industry and co-founded and led her own "original dot-com," as she put it, for 13 years.

She has fraternal twin boys and said she takes her new responsibility seriously. "Now it's not just responsibility for my kids, but all kids in San Francisco," she said.

"I feel the weight of the decision already," she added.

Hsu was a supporter of the recall. The Wind newspaper reported in January that Hsu started the Chinese/API Voter Outreach Taskforce to register new and non-citizen voters ahead of the recall election.

Motamedi lives in the Inner Sunset district. She just completed a four-year term serving as co-chair of the Public Education Enrichment Fund Committee where she advocated for accountability and transparency reform to ensure that San Francisco city funds were utilized for student life as mandated by the city charter, the release states. In that role she also reviewed SFUSD programming, advised the Board of Education, and provided recommendations to best serve its students.

Her father is an Iranian immigrant, she said during her remarks, and she attended public schools herself.

"I'm a public school kid and am focused squarely on public education," she said. "I thank the thousands of parents who advocated for our students. I know how hard the last dew years have been for so many."

Motamedi holds an MBA from the University of Washington and a bachelor's degree in political science from UC Santa Cruz, the release states. She grew up in Los Angeles and said she has lived in San Francisco for over 20 years.

Weismann-Ward is biracial and lives with her family in the Mission district. She is the associate director of the Stanford Law School Immigrants' Rights Clinic. According to the mayor's office, she is an immigration attorney and supervises clinical law students in their representation of clients facing removal from the United States. She speaks fluent Spanish.

Weissman-Ward is married to Joshua Arce, whom Breed appointed as director of workforce development for the city. Arce previously ran for District 9 supervisor.

San Francisco school Superintendent Vincent Matthews praised the new board members. He spoke at the event and was joined by Jenny Lam, the new school board president.

"On behalf of President Lam and the current commissioners I welcome our three new commissioners and I look forward to working with the board," he said.

One of the immediate tasks for the new school board will be conducting a search to replace Matthews, who announced in 2021 that he would retire at the end of that academic year. He later agreed to stay on another year and is expected to step down in June.

"It is only fitting that the mayor chose three current public school parents for these appointments, when families were for far too long ignored by the school board," the organization stated in a news release. "We are excited to hear more about their plans for a better SFUSD and are eager to work with them — as well as current commissioners — to put students first."