Out in the World: SF rally calls on Biden administration to change US immigration policies 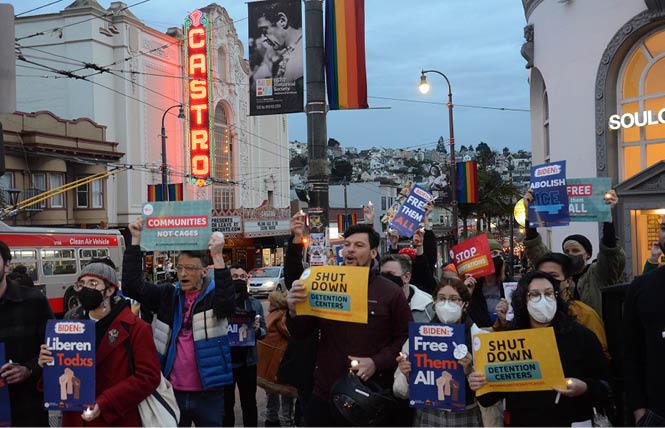 A new San Francisco-based organization assisting LGBTQ asylum seekers to rebuild their lives in the United States called upon President Joe Biden's administration to do better by queer people seeking refuge in the U.S. at a recent rally.

Rainbow Beginnings is a new organization dedicated to providing support for LGBTQ asylum seekers and advocating for their rights. The organization was founded in 2020 by Boido, 43, a gay first-generation Mexican American nonbinary person with the support of their life partner, Craig Smith. The volunteer-led organization has a budget of $130,000 and received its official IRS nonprofit status in 2021, they said.

Rainbow Beginnings organized the protest to raise awareness of U.S. policies harming LGBTQ asylum seekers and their struggles within the country.

Campos called the policies for asylum seekers and refugees, especially those who are LGBTQ, "unacceptable."

"We have to look within our country because this country is not doing right by immigrants and asylum seekers," said Campos, who came to the U.S. as an undocumented youth at the age of 14 — crossing the border with his sister on his back, as they escaped political turmoil in their native Guatemala.

Campos is currently on leave as chief of staff to San Francisco District Attorney Chesa Boudin during his bid for Assembly race, in which he faces District 6 Supervisor Matt Haney in an April 19 runoff.

"It is simply un-American to close the doors to people, and especially LGBTQ people that are being sent back to countries where they're simply going to be killed," Campos told the crowd, referring to the murder of El Salvadorian transgender woman Camila Diaz Cordova and others like her.

Diaz Cordova was deported several times by authorities in the U.S., Guatemala, and Mexico before the U.S. deported her to El Salvador for the last time in 2017. She was killed in 2019. In an unusual case, her murderers were brought to justice.

An estimated 138 people who were deported from the U.S. to El Salvador between 2013 and 2019 were killed soon after they returned to their home country, according to Human Rights Watch's report, "Deported to Danger: United States Deportation Policies Expose Salvadorians to Death and Abuse", published in 2020.

Human rights and LGBTQ Salvadorian and international organizations believe the number could be much higher.

Advocates told HRW that many homicides weren't reported and neither American nor the Salvadorian governments tracked individuals following deportation from the U.S.

"Our concern is that many of these people are facing a death sentence," Alison Leal Parker, HRW's U.S. managing director, told Al Jazeera.

This is only one country's example of the consequences some LGBTQ asylum seekers face when they are deported back to their home country.

"We're really worried about the people who fail," said Boido, who has seen photos of funerals of LGBTQ people after they've been deported to their countries of origin. "That's just a big failure on our country."

Campos told the crowd the U.S. treatment of asylum seekers is "not acceptable in this day and age."

Boido said the demonstration was successful, calling Campos' speech "really powerful and really impactful," how he spoke to "the gay queer immigrant experience."

Rainbow Beginnings
Boido and Smith co-founded Rainbow Beginnings because of gaps they identified providing services to queer asylum seekers once they were in the U.S. — mainly by hosting asylees in their home once they arrive in the area. The organization does not provide legal services, but refers asylees to groups that do.

The couple was inspired by the headlines about LGBTQ migrants traveling in caravans in 2018. They started volunteering with the immigration-justice committee of the Los Angeles chapter of Democratic Socialists of America. The couple visited the LGBTQ shelters in Mexicali and Tijuana and said that they were touched by the migrants' stories about escaping persecution, violence, corruption, and poverty in their home countries; the dangers of the caravans; and life at the U.S.-Mexico border.

The lifelong activists began fundraising campaigns for LGBTQ migrant shelters in Mexico. They transported queer Immigration and Customs Enforcement detainees from the immigration detention facility in Calexico (the Imperial Regional Detention Center) to relatives and host families. Starting in 2019, they hosted people in their homes, first in Los Angeles and Palm Springs, and now in San Francisco. The launched a visitation program to the detention centers with the detainees and Rainbow Beginnings volunteers that pivoted into a pen pal program during the COVID-19 shutdown.

Boido, a fashion industry consultant, and Smith, a paralegal who is currently on disability, got a larger home to temporarily house LGBTQ asylum seekers when they moved to San Francisco. Currently, two queer asylum seekers live rent-free in their four-bedroom San Francisco apartment.

The couple anticipates six more LGBTQ asylum seekers will arrive at their home soon, they told the B.A.R. March 9. The couple hosts people for six to nine months rent-free and covers their basic living expenses while they wait to obtain their work permits and other initial documents to legally stay in the U.S. During that period Boido and Smith facilitate connecting their clients to legal support, social workers, health care, and other services they need, they said. Most people stay with them for six months, Boido said.

Luis, a 37-year-old gay man from Honduras, was the first asylum seeker the couple housed and sponsored after he was released from an ICE detention center in Colorado in November 2019.

Luis only went by his first name to protect his privacy. He is not out to his roommates. He spoke to the B.A.R. with the assistance of Spanish translator Karla Osorio.

The former director of Permanent Action for Peace, Pro Human Rights in Honduras, Luis fled the Central American country as part of the second migrant caravan in 2018 due to persecution for being gay, he said. The first caravan arrived at the U.S.-Mexico border in February of that year.

Luis, who spent nearly a year at an ICE detention center in Colorado before being released in 2019, said he wouldn't have survived his release without Boido and Smith's help. The couple cared for him through hospitalization for pneumonia and helped him get mental health treatment for the trauma that he endured from Honduras to after being in ICE custody, he said.

Two years later, Luis dreams of becoming a lawyer. He lives in Florida and is currently working in sales. He is in the process of getting his citizenship and learning how to speak English.

Boido and Smith have personally housed and supported 30 LGBTQ asylum seekers from all over the world, the couple told the B.A.R.

Protest
Luis said the recent Rainbow Beginnings protest was important. He is critical of the treatment he and his fellow asylum seekers received at an ICE detention center in Colorado.

"I came searching for protection," he said. "I did not receive protection. I actually received torture.

"The conditions there aren't exactly humane," he continued, stating that Americans' consciousness about immigration issues needs to be raised and Americans need to speak out more against the treatment of undocumented immigrants. "There is no real state of human rights," he said.

Media reports in 2019 about the conditions at ICE detention centers in Colorado and across the country uncovered a plethora of abuses and it hasn't gotten better, according to reports.

Gustavo Ordonez, 34, an HIV-positive gay Venezuelan who is the HIV program coordinator for Aguilas in San Francisco, also said there were problems facing LGBTQ asylees.

"A lot of human rights are being violated, especially when you are a gay person," he said.

Ordonez sought asylum from Venezuela in the U.S. in 2017.

He did not receive Rainbow Beginnings' services but supports the organization by providing translation services and telling his story to give other LGBTQ asylum seekers hope, he said.

In San Francisco, Ordonez obtained health care and support at the San Francisco AIDS Foundation, legal support at the LGBT Asylum Project, and volunteered for organizations, which led to his current job at Aguilas, he said. He is still in the process of obtaining his green card.

"One of our big goals is to be part of educating the LGBTQIA community" that the horrible, headline-making things that happen to LGBTQ people around the world need to change, said Smith.

He said the organization receives about 30 calls for help daily.

These issues are what prompted the demonstration last week.

"We watch[ed] Trump do horrible things. We champion[ed] Biden so that we didn't have to watch these horrible things anymore and they're still continuing," Boido said.

The 11-page brief, "Networks of Care for Displaced LGBTQ+ People: How the United States Can Support LGBTQ+-led Organizations in Central America and Mexico," published by the U.S.-based Refugees International and Costa Rica-based IRCA CASABIERTA in January, noted a squeeze on Central American LGBTQ organizations by governments in El Salvador, Guatemala, Honduras, and Nicaragua.

Researchers found that these countries' governments are targeting LGBTQ organizations through heavy taxation of foreign funding, violently targeting human rights defenders, limiting services and safe spaces, and perpetrating high rates of violence against transgender women. There are also strains on immigration services and various civil society organizations in each country, among other issues.

Rachel Schmidtke, co-author of the report, said LGBTQ organizations could do so much more but their efforts are impeded by lack of funding and risks to their lives that impact services and shelters for LGBTQ people.

"Those are really, really challenging contexts that they were operating in," said Schmidtke, a straight ally. "A lot of them didn't want to be as public about the work that they were doing because they were fearing for their lives as well."

Schmidtke said the U.S. government can't underestimate the importance of LGBTQ-led organizations in Mexico and Central America or the need for them to be at the table shaping policies and being fully supported.

"These people are really at the forefront of providing the most critical services ... life-saving support to LGBT displaced people. They need to be at the center of any type of policies that the U.S. or other countries are crafting for LGBT people," she said, adding, "They're the ones that need to be leading the conversations."

Schmidtke wants the U.S. and other governments to fund LGBTQ organizations. The U.S. in particular, "needs to start putting their money where their mouth is" for these organizations, she said.

Vice President Kamala Harris, whom Biden named as the administration's point person on immigration issues at the nation's southern border, did not respond to the B.A.R.'s request for comment.

Out in the World: Singapore high court rules to keep law criminalizing gays

Out in the World: Russia hits snag in first attempt to shutter LGBTQ rights organization

Out in the World: Passage of Global Respect Act signals US stands with LGBTQ people globally
Sign up!