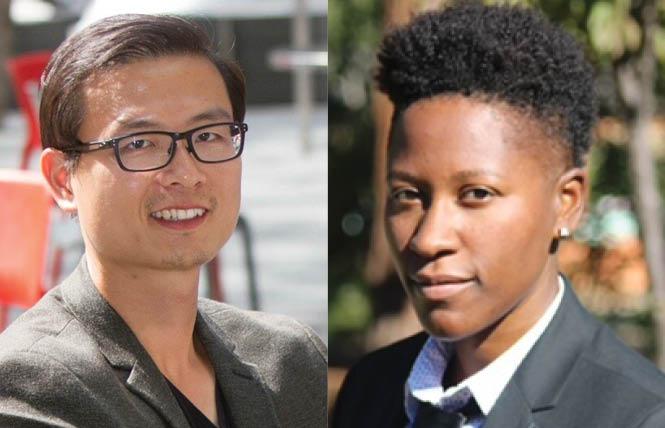 Two LGBTQ groups involved in San Francisco politics have welcomed new leaders this year. For both, it is shaping up to be a trial-by-fire introduction.

Chan, a venture fund strategic consultant, took over in January just as news broke that the parents of Jaxon Sales, a gay 20-year-old who died March 2, 2020 in a Rincon Hill apartment, were demanding San Francisco public safety officials reopen their investigation into the circumstances of his death. GAPA helped promote their pleas and organized a rally last month in front of City Hall to draw more public attention to the issue.

"The event is very sad, but I think that is why we are here. For us, we have the ability to magnify voices and messages to the community," said Chan, 39, who is gay and grew up in Simi Valley, California.

The Alice B. Toklas LGBTQ Democratic Club in January elected Iowayna Peña as its new female co-chair. She succeeded Catie Arbona, who wrapped up her two-year term in the position, and is sharing leadership duties with Alice's male co-chair Gary McCoy, a gay man who is director of policy and public affairs for HealthRIGHT 360.

"It is no secret that when we initially were talking about it, I didn't think I had much interest in it. Politics is not really my jam, but policy is," acknowledged Peña, 40, a project manager for the San Francisco Giants' Mission Rock mixed-use redevelopment across from its waterfront ballpark.

Nonetheless, Peña came to the conclusion that becoming co-chair "seemed like the right timing" as it aligned with advancing a lot of the work she did last year as Alice's policy committee co-chair. Issues like housing and the needs of the LGBTQ community are front-and-center in the current political conversation.

"We did a lot of revamping of our policy platform. It was a big lift," said Peña, who grew up in Long Beach. "There is still a lot of work to do carrying out some of the groundwork we laid last year."

But it will likely need to wait until 2023, she noted, due to the 2022 elections taking up the bulk of Alice's focus this year.

"As you know, it is a very busy election year in the city. I don't think it leaves a ton of space for big policy initiatives," said Peña, who moved to Oakland from San Francisco during the COVID pandemic with her wife, Naomi Fierro Peña, her partner of seven years whom she married last summer.

Just as Peña came aboard as Alice co-chair, the election season heated up in San Francisco due to the special ballot in February. Among the races on it was the contest for the city's open 17th Assembly District seat.

David Chiu resigned in November to become San Francisco's first Asian American city attorney. Alice did not endorse any of the four candidates seeking to finish out his term in the February 15 special election.

District 6 Supervisor Matt Haney was the first-place finisher, while gay California Democratic Party Vice Chair David Campos came in a close second. They are now facing off in the April 19 runoff race.

Alice had planned to host a candidate debate between the two progressive leaders. But in early March the club announced it was scrapping the event after Haney refused to commit to a date for it.

It is sure to be the first of many political headaches facing McCoy and Peña as they help navigate Alice through more endorsement votes and electoral match-ups this year. Next up are the contests and ballot measures on the June 7 primary ballot followed by the general election November 8 where more ballot measures and the even-numbered seats on the San Francisco Board of Supervisors will be among the races to be decided.

"We have endured far more change in the last three years than many of us could have imagined, but in the true spirit of perseverance, we faced these extraordinary events with purpose. That sense of purpose is where I'm focusing my attention as I learn alongside Gary, and prepare to co-lead this club through what will be a busy and challenging year," wrote Peña in her introductory message as co-chair.

Peña earned both a B.S. and master's in kinesiology from California State University, Fullerton. She served as an aide and policy analyst to former Oakland City Councilmember Annie Campbell Washington then joined the staff of former San Francisco Supervisor Malia Cohen, becoming her district director when Cohen was elected to the state Board of Equalization.

A lifelong baseball fan married to a sports fan, Peña joined the Giants in September 2020. As for her own interest in running for elected office, Peña said that was "not in my line of vision at this time."

A more immediate goal for Peña, who is Black, is recruiting more people of color, especially women, to the membership ranks at Alice.

"I am looking for more women of color interested in stepping into the space and working with us," she said.

A more diverse GAPA
Chan is also looking to further diversify GAPA away from its image as being solely a club for gay and bisexual Asian and Pacific Islander men. The group last year expanded the "G" in its name from meaning solely gay in order to reflect its being open to people of all sexual orientations and gender identities.

"We want to let people know who are interested in the membership or being on the board we are not just a group of gay Asian men," said Chan. "Now we are even more expansive in our membership."

To serve alongside him this year as GAPA's vice chair, Chan recruited for the leadership position historian Rachel Cheng, who is nonbinary. They are believed to be the first non-cisgender person to serve in one of the group's top two leadership positions, said Chan. Also on the board is filmmaker Jethro Patalinghug, who is also nonbinary and performs in drag as Virginia Please.

He moved to San Francisco in 2015 from London, where he had been working in investment finance. An MIT graduate, he knew a number of people from college who were working in Silicon Valley.

"San Francisco is known as the gay capital of the world, and I always wanted to live here," said Chan, a Duboce Triangle resident who joined GAPA's board in 2020.

He had first gotten to know GAPA through singing in the GAPA Men's Chorus. More recently, he had been its development chair. As for leading the group, Chan said he wanted to help shape what the queer Asian community could be in the Bay Area.

"In San Francisco, we do have so many Asian communities and a large diaspora in the Bay Area. People have a different vision of what that interconnected community could be, and I wanted to be part of it," said Chan, adding that through GAPA he has come to learn about the rich LGBTQ API history in the region.

GAPA grew out of the AIDS epidemic and need for gay API men to find a safe space to connect. It hosts the popular Runway drag benefit, begun in 1988 and expected to be held in person this year in August, and has spawned various other nonprofits, such as the Prism Foundation.

"I was really proud to hear GAPA was one of the first organizations that came together to create a safe space for queer Asian men," said Chan. "It's good to be part of a group, organization that has always, in some ways, been a pioneer."

It also has its own political action committee, the GAPA PAC, and endorses in political races around the Bay Area. Like the Alice club, GAPA did not endorse in the special Assembly District race but backed the successful recall of the three San Francisco school board members.

GAPA has endorsed bisexual South San Francisco City Councilmember James Coleman in the race for the open 21st Assembly District seat on the Peninsula. It is looking to back more out API candidates, said Chan, and is working to encourage more people from the LGBTQ API community to seek elected office.

"We think it is definitely very important. We are doing as much as we can to promote that," said Chan, who doesn't foresee running for office himself due to being "too blunt."

Anyone who is interested in a possible candidacy, Chan said, should reach out to GAPA.

"We have people who have run for office and can offer strategies on getting them to the path of running," he noted.

For more information about the Alice club, click here. https://www.alicebtoklas.org/