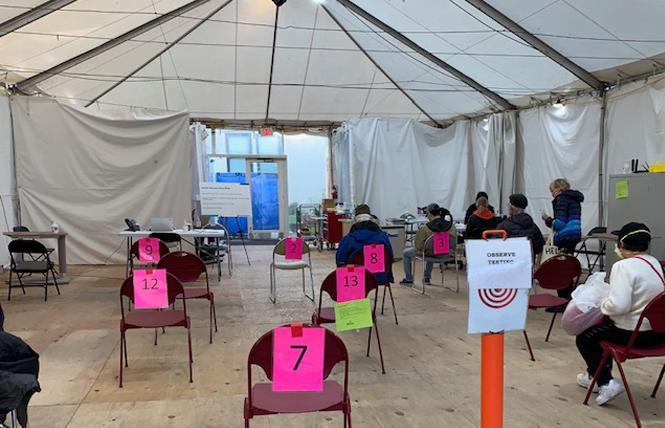 People wait after getting vaccinated against COVID-19 in San Francisco in 2021. Problems still persist in collecting COVID data for LGBTQ people in California and across the country. Photo: Sari Staver

As the COVID-19 pandemic enters into its third year, there is still no accurate, comprehensive data on how the health crisis has impacted LGBTQ Americans. Even in California, where state health officials have taken steps to address the issue, no report is forthcoming on how many of the state's LGBTQ residents have contracted the virus, died from it, or been fully inoculated against it.

The ongoing omissions in sexual orientation and gender identity data, or SOGI for short, not only shrouds how widespread COVID infections and deaths have been within the LGBTQ community but myriad maladies and illnesses that research indicates are disproportionally borne by LGBTQ individuals. The continued lack of data frustrates LGBTQ advocates who have been beseeching federal and state health officials for years to remedy the problem.

"We have been asking this for two years now," said Sean Cahill, Ph.D., a gay man who is director of health policy research at Boston's Fenway Institute, of the SOGI COVID data in particular.

In a recent interview with the Bay Area Reporter, Cahill said despite repeated calls for officials at the Centers for Disease Control and Prevention to specifically focus on the SOGI data for COVID, any "concrete steps" do not appear to have been taken.

"Maybe they are in the works, but I don't know that. I'm hopeful that is the case, but we are just really waiting to see," he said.

Using a limited data set of roughly 14,000 LGBTQ people from the National Immunization Survey Adult COVID Module conducted last fall, the CDC did issue a report February 4 that found gay or lesbian adults and bisexual adults were more confident than were heterosexual adults in COVID-19 vaccine safety and protection. Transgender or nonbinary adults were more confident in COVID-19 vaccine protection, but not safety, it found.

Yet the authors noted COVID-19 vaccination data among LGBT persons "are limited" partly because of the lack of routine SOGI data collection at the national and state levels. They pointed out that including SOGI questions "in surveys, as well as in COVID-19 testing, case reporting, and vaccination administration systems, can guide strategies to improve access to health care and prevention services among LGBT populations."

The CDC, however, did not respond to the B.A.R.'s inquiry on if it's working on changes to the COVID-19 case reporting so it includes SOGI data on those three areas. Nor did it say if the federal agency will be releasing guidance to state and local health officials that encourages SOGI data be collected on COVID testing, vaccination and case reporting.

In its final report and recommendations released in October, the Presidential COVID-19 Health Equity Task Force convened by President Joe Biden called for the federal government to fund "an equity-centered approach to data collection, including sufficient funding to collect data for groups" often left out of data collection like the LGBTQ community. It also specifically called for SOGI data to be collected in order "to understand the behavioral health impact of COVID-19 on LGBTQIA+ populations."

In it's LGBTQ+ progress report on Biden's first year in office, the Lambda Legal Defense and Education Fund listed SOGI data collection, including better information about the health needs of people living with HIV, as "a major goal" for the president to accomplish this year.

"The administration must collect additional data, provide analysis, and release to the public findings on HIV-related disparities in stigma, discrimination, new infections, knowledge of status, and more among marginalized segments of our society," Lambda Legal's report states.

What is now needed, said Cahill, is for the Biden administration to put the various SOGI recommendations into effect.

"We are still looking for CDC, and HHS more broadly, to take steps so we can better understand how the COVID pandemic is affecting LGBTQ people. That is what we need," said Cahill, using the acronym for the federal Department of Health and Human Services. "They have been doing good work but nothing concrete on SOGI data and COVID."

Scott D. Bertani, a gay man who leads the National Coalition for LGBTQ Health, which from March 21 to 25 is holding its National LGBTQ Health Awareness Week, told the B.A.R. that LGBTQ individuals receive better care when their health care providers know their full health data.

"Lack of SOGI data is a barrier to the inclusion of patients in their primary care and also with their specialty care and in supportive health services settings," said Bertani, director of advocacy at Health HIV based in Washington, D.C.

Whereas having such information "is the starting point to reducing health disparities and enhancing health outcomes," said Bertani, for LGBTQ patients.

New report released
A lengthy report issued March 9 by the National Academies of Sciences, Engineering, and Medicine came to the same conclusion on the current state of SOGI data in the U.S. The nine scholars on its Committee on Measuring Sex, Gender Identity, and Sexual Orientation found "not only how much progress has been made in the development and refinement of sex, gender identity, and sexual orientation measures that identify sexual and gender minority populations, but also how much progress remains to be made."

Their "Measuring Sex, Gender Identity, and Sexual Orientation" report noted that strides have been made over the last decade to improve LGBTQ data collection and better understand the health needs of the LGBTQ community. Nonetheless, "glaring gaps remain, often driven by a lack of reliable data," noted the report authors.

They noted that a 2020 report from the National Academies had called on the federal government to develop SOGI data collection standards to be used by federal agencies. The lack of uniform methods to ask about SOGI and how to report the data presents problems in utilizing the data that is collected.

"A lack of consistency in data collection measures introduces concerns about data comparability, complicates data analysis and reporting, and hinders efforts to advance research and develop effective programs and policies focused on improving the well-being of LGBTQI+ people," the authors of the new report noted.

Renewed calls for SOGI data
Their conclusions led to renewed calls from LGBTQ agencies and organizations from across the country for the routine, standardized collection of SOGI data. Nearly 200 advocacy groups signed on to a letter released in conjunction with the National Academies' report to highlight the need for detailed health information when it comes to LGBTQ people. 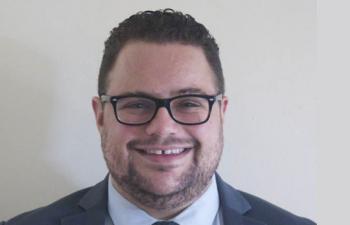 Among the signatories was the National Center for Transgender Equality. Its executive director, Rodrigo Heng-Lehtinen, hailed the findings of the scholars' report.

"We know that for serious policy makers, data can drive decisions," stated Heng-Lehtinen. "But too often LGBTQI people, especially transgender and nonbinary people, aren't visible in data, and we get left out of electoral power, policy and federal programing investments. Very few surveys and forms include questions that allow LGBTQI people to identify as such. While some of the questions regarding gender identity aren't perfect, these recommendations and best practices, when implemented, will help to ensure that not only are we seen, but also that we have access to vital safety net programs and basic human rights."

The report is further proof, noted Heng-Lehtinen, that SOGI data collection "is vital." It also confirms that such questions can be asked, he added, and people will answer them.

"As is the case with any type of demographic data collection, continuing research is needed to ensure that the questions keep pace with evolution in our understandings of sex, gender identity and sexual orientation," stated Heng-Lehtinen.

In an email about the National Academies report to the B.A.R., Cahill specifically called out the need for there to be a "two-spirit" option for sexual and gender minority people who are American Indian or Alaska Native to choose on surveys. He also welcomed the report's calling for inclusion of an intersex question, though he noted there still needs to be consensus on how to ask if someone is nonbinary.

"We call on federal and state public health and research agencies to implement it without delay," he wrote of the report and its findings.

Last July, the federal Office of the National Coordinator for Health IT required that the creators of the electronic medical records systems it certifies ensure SOGI data can be easily shared among health care providers, governmental agencies, and researchers. As the B.A.R. noted at the time, it is a first step toward creating a systemized way to securely capture and exchange the SOGI data among various entities.

"This is where we are headed, and now we need to have the regulatory cycle back it up with more and more teeth," National Coordinator for Health IT Micky Tripathi, Ph.D., had told the B.A.R.

CA health officials take steps
Since the start of the COVID pandemic California officials have attempted to address the lack of SOGI data but ran into problems with the health record systems being used around the state. They either had not been updated to ask the SOGI questions or were unable to share the data with state health officials because of problems with what are known as the Health Level Seven International (HL7) standards.

But in an emailed response to questions, the state agency said between February and April of last year the Public Health Work Group that oversees the HL7 standards had met and spoken with staff from the state's Division of Communicable Disease Control to address the standards needed for laboratories to exchange their SOGI data.

HL7 has now issued guidance for how labs can transmit SOGI data, according to the state agency, such as instructions for how the labs should format their reports to include SOGI data when such patient-level data is given to the lab.

The state agency also told the B.A.R. that it had updated its own regulations related to health care provider reporting of SOGI data as required by the enactment of Senate Bill 932 in 2020. It also noted that its own data systems have been configured to collect SOGI data during COVID case investigations.

Nonetheless, the state agency told the B.A.R. it remains unclear when it will have SOGI reports or data on COVID shareable with the public and health researchers.

"While data standards for laboratories now exist, laboratories have limited access to information on the sexual orientation and gender identity of persons for whom specimens are submitted for testing. Many laboratories have not configured their data systems to manage or transmit that information," according to the state agency.

Cahill told the B.A.R. the SOGI data needs to be collected and distributed as soon as possible.

"It is frustrating. I definitely admit I am frustrated," he said. "I know government moves slowly, but this isn't rocket science. We should be able to do this. We know how to ask the questions. I know people support this philosophically, so we need to make this happen."

Gay state Senator Scott Wiener (D-San Francisco) has spearheaded the effort to collect SOGI data in California and in 2020 authored a bill that Governor Gavin Newsom signed to track the effects of COVID on the community. He is disappointed by the slow pace of progress.

"I remain immensely frustrated that California continues not to collect comprehensive health data about COVID's impacts on the LGBTQ community," he wrote in a text message. "It's now been 18 months since our legislation became law. The system is clearly broken. It needs to be fixed."

Updated, 3/10/22: This article has been updated to include comments from state Senator Scott Wiener (D-San Francisco).

SOGI info only applies to positive COVID cases
Sign up!