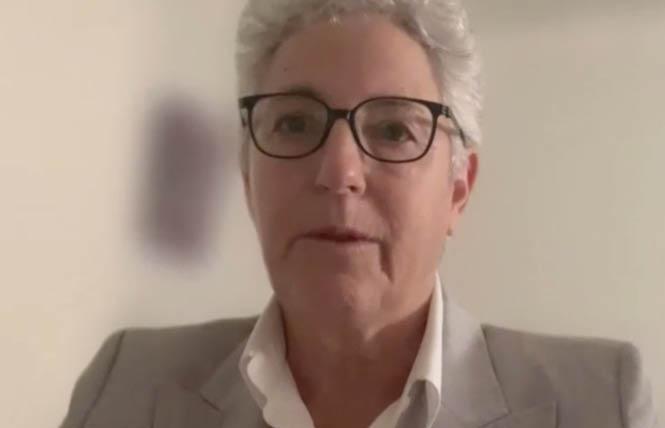 Carol Isen is the director of the San Francisco Department of Human Resources. Photo: Screengrab

San Francisco is set to track how many LGBTQ people are employed by, and are applying for, city and county jobs. At its meeting October 19, the Board of Supervisors gave preliminary approval for collecting the sexual orientation and gender identity data of the city's workforce.

It will be up to the city's Department of Human Resources to implement it after conducting meetings with LGBTQ advocates and city leaders about how best to ask the SOGI questions of new applicants for city and county jobs as well as those already employed. It is believed San Francisco will be the first such municipality to gather such information about its employees and those looking to be hired.

"This important policy change will give the city invaluable data on our LGBTQ+ workforce, and help identify potential barriers to city employment and advancement," stated Carol Isen, the city's human resources director who is herself a member of the LGBTQ community. "We look forward to implementing this change and expanding additional equity efforts that support pathways to city employment for the LGBTQ community."

As the Bay Area Reporter first reported in June, city leaders are striking a restriction in the city's municipal code that forbids it from inquiring into the "sexual orientation, practices, or habits" of city employees. Known as Chapter 12E, the City Employee's Sexual Privacy Ordinance of the Administrative Code, it was enacted in 1985 during the height of the AIDS epidemic as a way to protect LGBTQ applicants and city employees from being discriminated against.

With those fears no longer a concern, and SOGI data routinely asked of people seeking various city services and in public health settings, Mayor London Breed and gay District 8 Supervisor Rafael Mandelman introduced legislation during Pride Month that would repeal that section of the Administrative Code. It was initially approved by the supervisors' Rules Committee in late September but was sent back to the committee for a second vote Monday, October 18, due to substantive changes Mandelman made to his ordinance, as the B.A.R. previously reported.

Mainly, it was to correct the language in it to clarify that the SOGI data would be asked and kept in a confidential manner and not anonymously as originally stated. Due to the code update being done via an ordinance, the supervisors are expected to vote on it a second time October 26 to make it final.

"LGBTQ city employees drive our buses, fight our fires, and clean our streets. This legislation will help us to identify and address the needs of these employees and ensure that we are supporting and expanding San Francisco's LGBTQ workforce," stated Mandelman after the board unanimously voted to change the code without comment during its October 19 meeting.

In a statement, Breed hailed the supervisors' decision to support amending the city's code in order to gather the SOGI data.

"Since day one, I have made it a point of my administration to elevate and support LGBTQ leadership and representation," stated Breed. "This section of the administrative code was necessary to protect LGBTQ employees from discrimination and harassment when initially designed, but it has now outlived its purpose. With the board's approval, we are advancing our workplace measures to ensure that San Francisco is an inclusive city for all LGBTQ workers."

SF aims to collect LGBTQ data of its employees
Sign up!