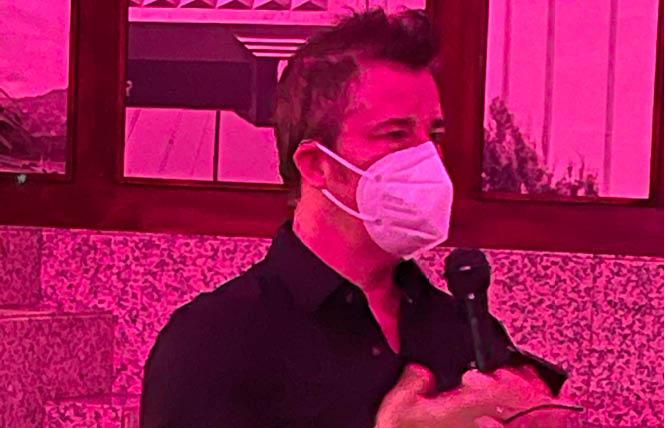 It was an in-person event for San Francisco Pride as it recognized LGBTQ artists and activists during its inaugural Ken Jones Awards reception October 14.

Held at the Hilton San Francisco's Cityscape Bar and Lounge near Union Square, the event acknowledged several people who received honors this year from the committee that organizes the city's yearly LGBTQ celebration. The annual in-person Pride parade and festival normally held the last weekend of June was canceled this year and last due to the COVID-19 pandemic; the awards have typically been presented at that time, along with the community grand marshals.

The evening was reminiscent of the days before the pandemic. Even though attendees were required by the event organizer to show proof of vaccination and wear masks, many people ignored the requirements to mask up once they were indoors. As the cheerful crowd mingled, people exchanged kisses, hugs, and enjoyed drinks.

Jones, for whom the reception was named, was a longtime Black gay activist and key to the desegregation of LGBTQ activism, as the Bay Area Reporter previously reported. He was also a president of the SF Pride board. Jones died of cancer January 13 at the age of 70.

One of the honorees was Sean Dorsey, a trans person who founded Fresh Meat Productions and Sean Dorsey Dance two decades ago. He received the Audrey Joseph LGBTQ Entertainment Award, which honors those whose artistic expression or contribution to the entertainment industry has left an indelible impression on the LGBTQ community and the movement for queer rights.

"This award just feels like such a beautiful opportunity to take a pause from all of the work, and just enjoy looking back over the last 20 years," Dorsey said.

He pointed out that a lot of work needs to be done to keep the trans community safe and thriving in the face of ongoing attacks that trans people face in their lives and through the media.

"It feels like 20 years is a pretty amazing and beautiful milestone, especially for organizing and artistry in trans and gender-nonconforming communities," Dorsey said.

Dorsey kept busy during the pandemic working on online content that could be accessible to everyone at home.

"For example, we created a new program, called 'Stay Fresh at Home,' where we commissioned artists to create short videos that lead the viewer through creative wellness activities and goodies," Dorsey said. "So it's everything from beginner bachata dance to fundamentals of wheelchair contemporary dance technique to singing and warming up. All kinds of amazing offerings."

Dorsey believes that has been a good way to connect these artists and what they're doing with an even larger number of community members. He still produces the annual Fresh Meat Festival, which is available online. Also, during the pandemic he converted all of the programs and events to be free of charge, but does accept donations.

Other honorees
Kris Perry and Sandy Stier received the Gilbert Baker Pride Founder's Award, which honors those who have made a significant and historical impact on the LGBTQ community and the movement for LGBTQ rights.

In 2010, Perry and Stier joined a lawsuit seeking to overturn Proposition 8, California's 2008 same-sex marriage ban. After a federal trial, then-Judge Vaughn Walker ruled that Prop 8 was unconstitutional. (Walker came out as gay following the trial.) Ultimately, the U.S. Supreme Court let Walker's ruling stand in 2013, paving the way for same-sex marriage in the Golden State. Perry and Stier were wed by then-Attorney General Kamala Harris at San Francisco City Hall the day the high court's decision was announced.

Perry and Stier are featured prominently in the HBO documentary, "The Case Against 8," where they were shown at home with their children, out in the community, and at court, as well as their legal marriage in San Francisco City Hall on June 28, 2013.

The José Julio Sarria History Maker Award, given to Bay Area individuals who have made a significant impact on how society views the LGBTQ community, went to Honey Mahogany. A trans nonbinary person, Mahogany is now chair of the San Francisco Democratic Party and a legislative aide for District 6 Supervisor Matt Haney, who is running for the soon-to-be vacant 17th District state Assembly seat. Mahogany is a co-founder of the Transgender District. She first came to national attention on the fifth season of "RuPaul's Drag Race," followed by releasing her debut EP "Honey Love."

Mahogany did not respond to a request for comment.

And finally, the Pride Creativity Award for outstanding artistic contribution to the LGBTQ community was awarded to Marke Bieschke, a queer man who's currently publisher of 48 Hills, an online news site. He was previously executive editor and publisher at now-defunct SF Bay Guardian weekly newspaper.

Bieschke and Mahogany are both co-owners of the Stud Collective, the queer former South of Market bar that closed its physical space in 2020.

Bieschke told the B.A.R. that it "was really an honor to receive an award with Ken Jones' name on it."

"He was such a force for inclusion and a trailblazer," he said in a phone interview.

Bieschke also noted that he, a writer, received the creativity award. "As a journalist I'm not afraid to hold Pride to account," he added.

SF Pride officials did not respond to a request for comment.

Fundraiser aims for bench to honor Ken Jones
Sign up!