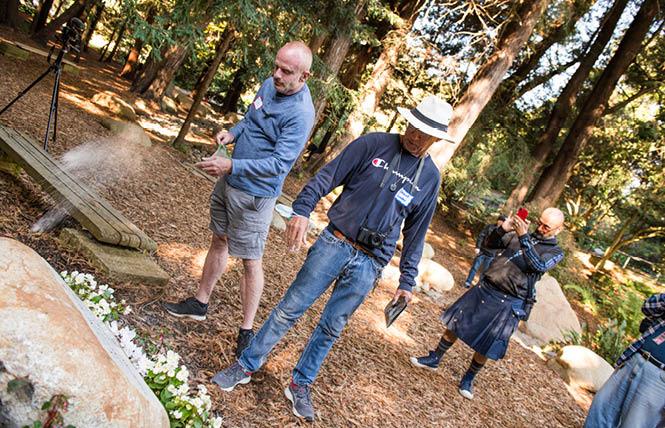 The National AIDS Memorial Grove has memorialized Timothy Ray Brown, who was the first person cured of AIDS, with a boulder at the contemplative space in San Francisco's Golden Gate Park.

Brown, also known as the Berlin Patient, was remembered at a short gathering October 16. He died September 29, 2020 after battling a recurrence of leukemia.

Around 40 people showed up to honor Brown, who was the first person cured of AIDS through a stem cell transplantation. As the Bay Area Reporter previously reported, in 2006, Brown was living in Berlin and had well-controlled HIV when he was diagnosed with leukemia, which would ultimately require two bone marrow transplants. His German physician, Dr. Gero Huetter, had the idea to use stem cells from a donor with a rare genetic mutation that blocks HIV from entering cells. He underwent intensive chemotherapy and radiation — nearly dying in the process — and the donor stem cells rebuilt a new immune system that was resistant to the virus. He had never tested positive for HIV again.

During the gathering, a memorial boulder was dedicated to Brown. The stone reads: "In loving memory of Timothy Ray Brown, the first person cured of HIV." Attendees were invited to plant flowers in front of the boulder. Additionally, Brown will be honored with a memorial bench and plaque in the Wellness Park adjacent to the Desert Regional Medical Center in Palm Springs, where he had lived at the time of his passing.

Those who attended the ceremony spoke of its importance.

"Anytime a community comes together to lift a member up it's a good thing," Vince Crisostomo, 60, a gay man who has lived with HIV for 34 years, told the B.A.R. "Today we honor a person whose history should not be lost."

Attendees sat in the grove's Circle of Friends for the informal gathering where anyone who wished to speak could do so. The first to make remarks was Tim Hoeffgen, Brown's surviving partner.

"Timothy Brown was my partner for about eight years," Hoeffgen said. "Tim was known as the Berlin Patient. He was the first person cured of HIV. He had acute myeloid leukemia and HIV and a scientist in Berlin, Germany came up with the idea of using a donor who had the Delta 32 deletion where he could do the stem cell transplant and cure both his leukemia and HIV. He actually had to have two of those stem cell transplants."

Hoeffgen recalled that it took Brown several years to come out as the Berlin Patient.

"Once he did, the scientific and HIV community really took notice," Hoeffgen continued. "He went out and spoke all around the country and internationally at the International AIDS Conference. He really inspired a lot of scientists to continue doing cure research and Tim really loved interacting with medical students, scientists, HIV activists, he really wanted everyone to have a cure for HIV on a mass scale."

Hoeffgen remembered Brown as a kind, sweet person. His voice quivered as he recalled the return of Brown's leukemia in the last year before his death and the organizing of the two memorials by a consortium of agencies.

"It was really a difficult time, but I'm thankful that all this came to fruition," he said. "I thank all the donors and volunteers that are here today. It's just a beautiful place where the boulder's at, and I'm glad that everyone's out here today. Thank you very much."

John Cunningham, AIDS grove CEO, thanked Hoeffgen as he stood up to say a few words.

"Forty years into the AIDS crisis none of us thought we'd be standing here today without a cure or a vaccine or anything," Cunningham said, referring to 2021 being the 40th anniversary of the first reports of a rare cancer seen in gay men. "But the reality of it is that's where we are."

Cunningham, a gay man living with AIDS, recalled the courage, strength, and selflessness of Brown and others who had stepped forward for the advancement of humanity.

"Taking risks for the betterment of those that are around us," he said. "Timothy coming out of being the Berlin Patient to being Timothy Ray Brown was yet another one of those examples. God knows we could continue to use those examples today with the struggle that we have in our society, so I believe that it is moments like this, the power of what we're doing here and the stories that will live on in perpetuity. Because a memorial is about so much more than the engraved names that are at my feet. A memorial is about the stories behind those names, behind those letters. The rich stories of humanity and love and life and courage and strength and struggle and death."

Cunningham added that it was the responsibility of a memorial to ensure that the lives lost were not in vain.

"It's the story of Timothy Ray Brown that will continue to inspire those in the future," he said.

Around a half dozen people stood up to speak.

"What Timothy did transcended languages," said Jesus Guillen, who spoke in both English and Spanish.

B.A.R. AIDS reporter Liz Highleyman said that she had interviewed Brown several times over the years and that they had become friends.

"I just want to speak to his generosity to the science," Highleyman said. "Once he came out, Timothy worked with doctors at UCSF and around the world. I don't know how many liters of blood he donated, how many lymph node biopsies he had, but any time he was called on he put his body on the line to try and make a cure happen for everybody. We've had so many disappointments in cure research and vaccine research over the years. But it all builds on each other. The COVID vaccines that we have now were developed on the basis of HIV vaccine research. Now we're hoping that will feed back and get us closer to an HIV vaccine. His generosity with his body as well as his time, I think, can't be underestimated."

Hoeffgen was the first to place a plant by the boulder as the others stood and quietly watched.

"Timothy brought hope to the scientific and HIV community for HIV cure research," Hoeffgen told the B.A.R. "Today we're just honoring his memory here at the National AIDS Memorial Grove. I think this is just a wonderful day and it's great that everybody's out here and spoke today and that we're honoring his memory."

About a half dozen plants were placed in the ground in front of the boulder. After the planting, a wreath was draped in the center of the Circle of Friends.

"It means a lot to me to be here today for this memorial event," said Roger Cunha, a 62-year-old gay man. "As a longtime survivor, 1987 diagnosed, I appreciate the message of hope, faith, and courage that inspires progress through activism. It reminds me how important it is to keep hope alive and continue to work in search for a cure to AIDS/HIV." 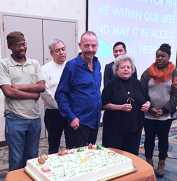 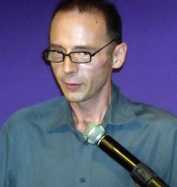