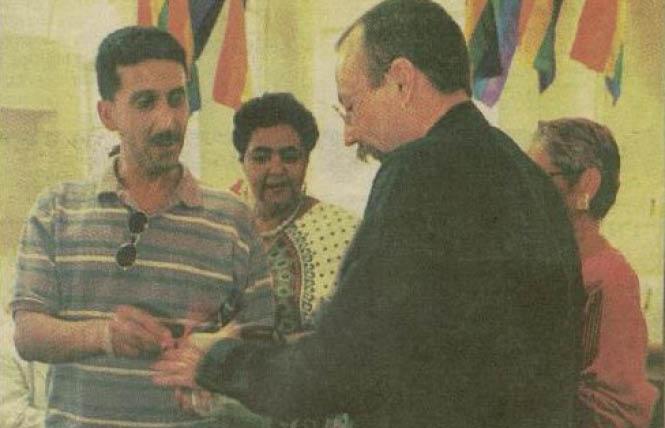 In the summer and fall of 1996, as AIDS ravaged San Francisco's gay community, Metropolitan Community Church-San Francisco pastor Jim Mitulski risked imprisonment, dispensing marijuana to alleviate his sick congregants' pain before it was legal to do so. He did this in church, right after services.

"The risk was real, the spiritual intensity was real, and the tangible relief for the people who used it was real," Mitulski recalled.

It's LGBTQ History Month, and Out in the Bay this week presents a "Stereotypes" podcast episode about Mitulski and the queer-centered MCC-SF's compassionate cannabis program. In the "Marijuana Minister" episode produced and hosted by Christopher Beale, Mitulski tells most of the story himself — in his own words and voice.

"We had rules: No money could be exchanged. The pot had to be donated. People had to provide a note," said Mitulski. San Francisco officials promised not to prosecute and said they would try to protect Mitulski and MCC-SF from federal and state prosecution, but they couldn't guarantee it.

The first Sunday, he said, news media were there and everyone was watching his sermon.

"I preached on: If you want to have an increase in your spiritual growth or spiritual life, act on your conscience," Mitulski recalled. "I took a risk. ... I acted on a belief that was motivated by my desire to provide healing and comfort ... this was something I could do. And I did it. I experienced God then."

Pot eased pain and diminished nausea caused by early HIV drugs, reviving the appetites of many who were wasting away. Phyllis Nelson, a church member who helped Mitulski, had lost both her son and his husband to AIDS.

"She said, 'If the attorney general had to spend a whole morning trying to get his son to eat a half a bowl of cereal, like I did, he would understand what we're doing right now,'" recalled Mitulski.

He estimated that the MCC-SF's cannabis program helped "a couple of thousand" people, many with AIDS "but other people too," before it ended in late 1996 after Proposition 215, passed by state voters, legalized medical marijuana use in California.

"Marijuana Minister" profiles Mitulski from his young gay activist days in 1970s New York: "I was very involved in gay ... in-the-streets politics. I found myself in those activities," Mitulski said. "I found my sense of self, my identity. I found my friends. I found my sexuality.

"We were all lovers. And that was a word we used by the way, 'an army of lovers cannot be defeated,' which is a classical phrase but we meant it," he added.

Mitulski moves from the Bay Area to Duluth, Minnesota, October 18 to be pastor of Peace United Church of Christ "in a state where medical marijuana is only partly legal and where recreational use is strictly illegal," he told us by email.

Eric Jansen is founding host and managing producer of Out in the Bay - Queer Radio from San Francisco. Learn more and listen at https://www.outinthebay.org/

Out in the Bay: Gay CA Supreme Court justice values struggle to be authentic
Sign up!