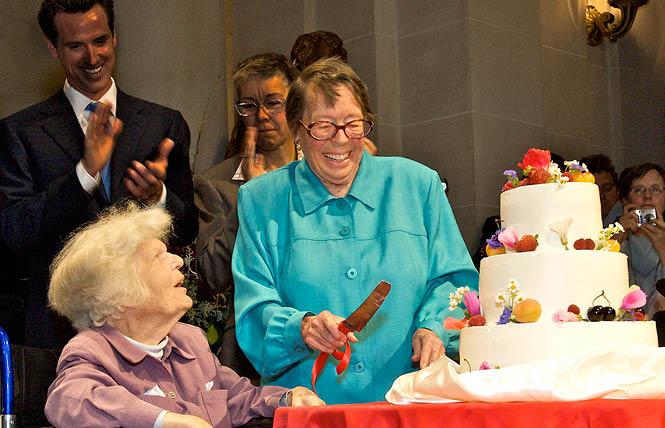 San Francisco's late lesbian pioneers and marriage equality advocates Phyllis Lyon and Del Martin are among the newest inductees into the California Hall of Fame.

Governor Gavin Newsom and first partner Jennifer Siebel Newsom made the announcement Tuesday, October 12. Lyon, Martin, and four others were all posthumously inducted during a webcast streamed by the California Museum, in lieu of an in-person event this year. The new inductees join 134 inspirational Californians previously named to the state's hall of fame, according to a news release from the museum.

"Jennifer and I are pleased to induct this group of extraordinary Californians into the Hall of Fame," Newsom stated. "There is no doubt their lives and legacies have helped make California synonymous around the world with innovation, imagination, and progress."

Added Siebel Newsom: "These luminaries represent the best of California. Each one has left their own indelible mark on history and reminds us of the creativity, ingenuity, and courage that lives inside all of us."

This year's inductees represent the 14th Hall of Fame class, according to the museum. The Hall of Fame was launched in 2006 by former governor Arnold Schwarzenegger and first lady Maria Shriver, herself an inductee in the 10th class in 2016, to honor Californians who embody the state's spirit of innovation and have made history.

Kate Kendell, the former executive director of the National Center for Lesbian Rights and a longtime friend of Lyon and Martin, said the couple deserved the recognition.

"Inducting Del and Phyllis into the California Hall of Fame is a wonderful way to honor their lives and legacies," Kendall wrote in an email to the Bay Area Reporter. "They both loved California and knew that this state, and especially San Francisco, both challenged and nurtured them and their activism. They left a lasting mark on the Golden State and this is a fitting tribute."

Trailblazing lesbian couple
Lyon (1924-2020) and Martin (1921-2008) were trailblazers in the LGBTQ, women's, civil rights, and the rights of older Americans movements. Together for 58 years, Lyon and Martin were the first same-sex couple to marry in California on June 16, 2008. Weeks later, on August 27, 2008, Martin died in San Francisco, with Lyon at her side.

The couple's wedding in 2008 was not their first. In 2004, when Newsom, then-mayor of San Francisco, ordered city officials to issue marriage licenses to same-sex couples, Lyon and Martin agreed to be the first couple to receive such a license. While that marriage was invalidated by the California Supreme Court, the ability to later marry in 2008 during the brief window when it was legal prior to the passage of Proposition 8, the state's same-sex marriage ban, meant a great deal to Lyon, according to her obituary in the B.A.R. (After a federal trial, Prop 8 was overturned and in 2013 the U.S. Supreme Court let that ruling stand, ushering in same-sex marriage in the Golden State.)

In 2009, Lyon spoke with the B.A.R. about the couple's involvement in the fight for marriage equality. Though the couple participated in every pivotal moment of California's same-sex marriage fight, Lyon said that nothing in their activist history suggested that they would turn to the state to legitimize their relationship.

"A lot of women thought that marriage was a big fart," Lyon said at the time, recalling the mindset of feminists working in the 1970s who viewed marriage as an institution that kept women trapped in traditional roles. Before the couple's February 2004 nuptials, Lyon said, she placed marriage low on her list of priorities in the struggle for gay rights.

Still, when Newsom and Kendell, then the executive director of NCLR, asked Lyon and Martin to be the first couple to marry during what became known as the "Winter of Love," they agreed.

"Well, sure," Lyon remembers saying in response to Kendell's request, shortly before the ceremony took place on February 12, 2004.

Early life
The couple met when Martin joined the staff of the Seattle magazine where Lyon was working and the two became lovers in 1952. The couple relocated to San Francisco and moved into a flat on Castro Street together on Valentine's Day 1953.

In San Francisco, the women embarked on a lifelong career of activism. In 1955, along with three other lesbian couples, they co-founded the Daughters of Bilitis. Known as DOB, it was the first political and social organization for lesbians in the United States. Shortly after founding DOB, the couple began publishing The Ladder, the first monthly lesbian publication focused on politics, fiction, poetry and connecting lesbians across the country. The founding of DOB and the publication of The Ladder, continuously from 1956-1972, were acts of immense political courage at a time of unchecked harassment and violence directed at "homosexuals," largely at the hands of law enforcement and political officials, the obituary noted.

The publication of Lyon and Martin's book, "Lesbian/Woman" in 1972 changed countless lives. Many lesbians found a positive description of lesbian lives for the very first time when they discovered this book.

The women were the first open lesbians to join the National Organization for Women and helped form the Council on Religion and the Homosexual in Northern California to persuade ministers to accept lesbians and gay men into churches. They pushed to decriminalize homosexuality in the late 1960s and early 1970s.

After residing in the Castro, the couple purchased a home in Noe Valley. In May, the San Francisco Board of Supervisors approved landmarking the two-story cottage, where the couple lived for more than five decades. It's the first private residence owned by lesbians to receive landmark status in the Western United States, according to local historians, as the B.A.R. previously reported. In San Francisco, it is the fifth site to receive city landmark status specifically for its importance to LGBTQ history.

The last Hall of Fame class was in 2019. All of the inductees, including this year's, can be viewed on the museum's website.