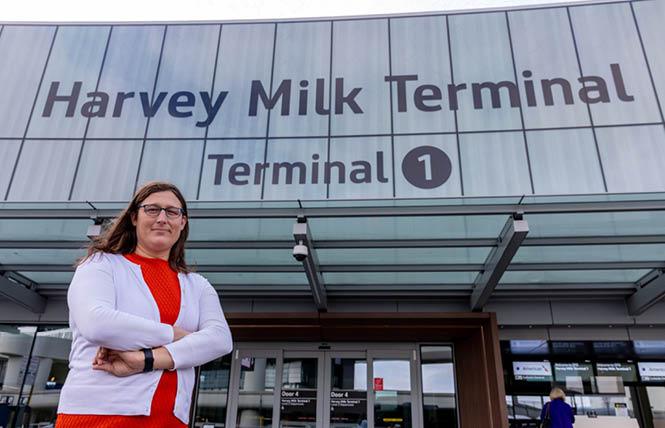 San Francisco Mayor London Breed has sworn in the first trans person to the powerful airport commission and its only current LGBTQ member.

In an October 8 news release, Breed stated that Jane Natoli was sworn in October 7. The San Francisco Airport Commission is a five-member body charged with establishing the policies by which the airport operates. Subject to the approval, amendment, or rejection of the Board of Supervisors, the commission has exclusive authority to plan and issue revenue bonds for airport-related purposes, according to a news release from the mayor's office.

Natoli is a biking activist who in August 2020 was rejected by the Board of Supervisors to a position on the San Francisco Municipal Transportation Agency commission. She was also nominated by Breed to that post, but had to go through the board's rules committee and then a full vote by the supervisors. During that debate, many of the progressive supervisors expressed concerns over equity issues surrounding the city's public transportation system. Most supervisors felt that Natoli was qualified, but some opposition emerged from progressive groups, including the Harvey Milk LGBTQ Democratic Club.

This time, it was a mayoral appointment that the supervisors had 30 days act on it if they wanted to reject it with a two-thirds vote. That did not happen, as Natoli told the Bay Area Reporter that she was officially nominated August 31.

According to the mayor's office, Natoli is an advocate for safe and affordable transit and the LGBTQ+ community. She currently serves on the board of the San Francisco LGBT Community Center.

"I'm proud to welcome Jane Natoli to the airport commission," stated Breed. "She is a leading advocate for reliable transit and is deeply committed to fighting for the LGBTQ community. I am confident that her perspective and commitment to our city will benefit this commission."

SFO is in the midst of a $2.4 billion remodeling project for the Harvey Milk Terminal 1, which is being unveiled in stages through 2024. Already, some airlines are using the terminal, which has exhibits detailing the life and political career of the late gay supervisor.

Natoli moved to San Francisco in 2013 and became involved in local politics and community organizing. Since 2019, Natoli has served as a mayoral appointee on the Citizens' General Obligation Bond Oversight Committee.

Natoli said she is proud to serve the city in her new capacity. She replaces Rich Guggenheim, who stepped down after many years of service, according to the mayor's office.

"It's an honor to be appointed to the airport commission and I want to thank Mayor London Breed for nominating me," stated Natoli. "I look forward to bringing not only my oversight experience from serving on other boards and commissions but my perspective as a trans individual. San Francisco is an LGBTQ+ capital and SFO is the first entry point for so many people visiting and moving here and I want to ensure that SFO is as welcoming and inclusive to all folks as it can be."

"I am proud to see that Mayor Breed has uplifted a member of the trans community to such a prestigious commission. As someone who fights for representation of trans women in leadership, I look forward to seeing all of the good Jane's experience will bring to the airport commission," stated Khilynn Fowler, interim supervisor for Trans Thrive at San Francisco Community Health Center.

Natoli is a financial crimes analyst at Stripe, where she specializes in anti-money laundering investigations. She has a B.S. degree from Iowa State University and is a resident of the Inner Richmond.