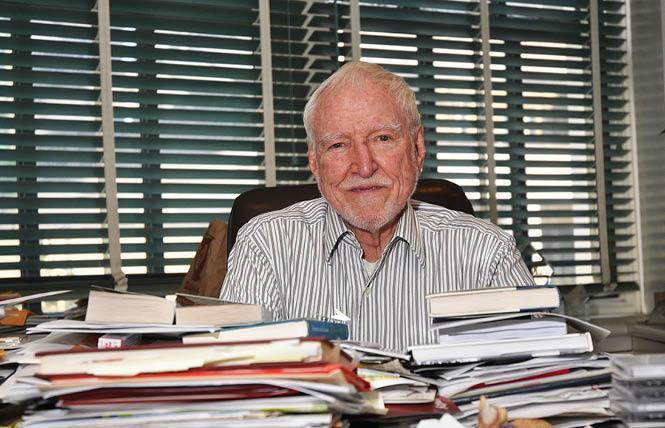 Hormel, a philanthropist and the first openly LGBTQ person to represent the United States as an ambassador (to Luxembourg from 1999 to 2001), died in San Francisco August 13 at the age of 88.

Former President Bill Clinton nominated Hormel as ambassador in 1997 but it was contentious. Senate Republicans and conservative Christians opposed Hormel's nomination, and Clinton ultimately employed a recess appointment in May 1999, with Hormel being sworn in a month later. Since his appointment, there have been a number of gay men appointed as ambassadors.

Following Hormel's death, gay San Francisco activist Michael Petrelis filed a federal FOIA request with the FBI, which the agency responded to with a letter to Petrelis dated September 14 stating that "the material you requested is exempt from disclosure."

Petrelis, who has filed "hundreds" such FOIA requests before, stated that "this is the first sort of rejection I have received."

"This is troubling that it's being withheld," Petrelis said, adding he was interested in the file out of "sheer, queer curiosity" because "Hormel's ambassadorship was so controversial from the time [then-President Bill] Clinton appointed him, I was convinced there was an FBI file on him."

An example of a 7(E) exemption occurred in 2009. According to the U.S. Court of Appeals for the District of Columbia's decision in Mayer Brown LLP v. Internal Revenue Service, the federal government is justified in using 7(E) to prevent the disclosure of documents if those documents "could encourage decisions to violate the law or evade punishment."

In that case, Mayer Brown LLP sought information internal to the IRS about how the agency handles settlement of tax fraud cases, including "settlement strategies and objectives, assessments of litigating hazards, [and] acceptable ranges of percentages for settlement." The court ruled that the IRS was within its rights under 7(E) not to reveal those in response to a FOIA request.

The FBI Information Management Division told the B.A.R. it needed Petrelis' consent to ask the FBI about the matter. After such consent was communicated to the FBI, an unidentified spokesperson nonetheless replied that "under the FOIPA [Freedom of Information and Privacy Acts], you are able to submit a request for reasonably described records. Our program is unable to answer questions pertaining to a request submitted by a third party, as you have referenced."

Paul Bresson, the unit chief for the FBI's office of public affairs, subsequently stated October 1 that "we are currently reviewing this matter and will be following up with a letter to Mr. Petrelis."

Petrelis said as of October 4 he hadn't received anything in the mail from the FBI.

Tiffany Wong, an attorney with the D.C.-based Reporters Committee for Freedom of the Press, told the B.A.R. that the next step would be to file an administrative appeal with the agency.

Following up, Wong stated that "this is a very standard response from the FBI" to a FOIA request.

Asked if the Hormel family has a statement on the matter, spokesman Alex Clemens stated that "the family is mourning their loss, and will not have a comment at this time."

Updated, 10/5/21: This article has been updated to include an additional comment from Tiffany Wong.