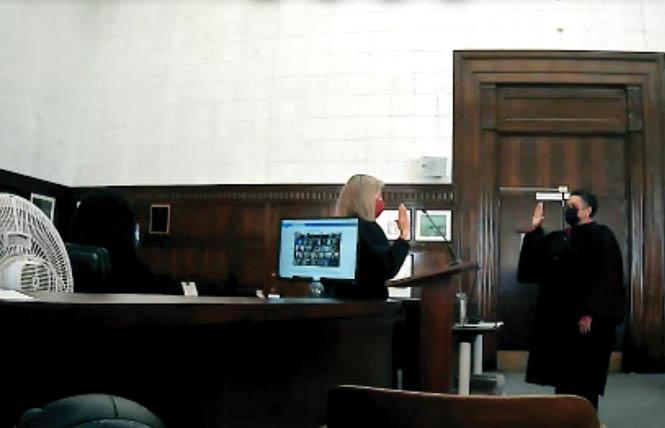 Alameda County Superior Court got its newest LGBTQ judge October 4 when Kelli Evans was sworn in during a hybrid ceremony.

A Democrat who identifies as queer Evans, 52, was appointed to the East Bay bench by Governor Gavin Newsom in July. Evans and her wife, Terri Shaw, joined Presiding Judge Tara Desautels in-person at the René C. Davidson Courthouse in Oakland. Shaw enrobed Evans before she took the oath of office, administered by Desautels.

The couple's daughter, Kaden Evans-Shaw, joined virtually while in between classes at college, Evans said.

"I want to thank Governor Newsom and the staff members in the governor's office," Evans said during her remarks. Prior to being appointed a judge, Evans had been serving as Newsom's chief deputy legal affairs secretary since last year. She initially was brought on as the governor's deputy legal affairs secretary for criminal justice when Newsom took his oath of office in 2019.

As the Bay Area Reporter noted when the governor appointed Evans, the Oakland resident had served as a special assistant to former state attorney general Xavier Becerra from 2017 to 2019. She had left her position as senior director for the administration of justice at the California State Bar to join Becerra's staff.

Evans said that she has been "fortunate in my career to be surrounded by insightful friends." She also recalled her late grandmother, who only had an eighth grade education. She purchased "on an installment plan," Evans noted, a set of encyclopedias that Evans read when she was growing up.

Evans also referenced her grandmother in a story two years ago in the Los Angeles Blade about Newsom's LGBTQ staff members. Evans married Shaw, her college sweetheart, and she told the LGBTQ newspaper that she has "deep appreciation to my grandmother who raised me and to all those who came before us who made it possible for a queer Black girl from the projects to be where I am today."

During her remarks Monday, Evans said that it's important for judges to be humble.

"I know that the courts don't belong to judges," she said. "The courts belong to the people. Everyone deserves to be heard, and to be treated with dignity, fairly, and with respect. I promise to do that the best I can."

Evans fills the vacancy created by the retirement of Judge Thomas C. Rogers from the East Bay bench.

Following Evans' remarks, Desautels announced that she will be assigned to a general civil calendar at the Wiley W. Manuel Courthouse in downtown Oakland. She will hear civil harassment and small claims cases, the presiding judge said.

Borkon sworn in as newest Alameda County judge
Sign up!