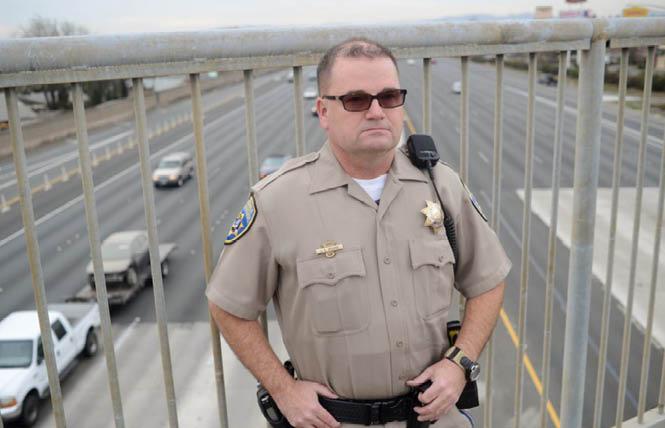 A gay man alleging discrimination in a lawsuit against the California Highway Patrol has settled the case for $2.2 million.

As the Bay Area Reporter previously reported, Jay Brome, a former CHP officer, sued the agency in 2018 alleging he'd experienced decades of harassment in the CHP, starting in the academy and continuing through his work in the San Francisco, Solano, and Contra Costa county offices.

A Solano County Superior Court judge initially threw out the case, ruling that it was filed after the statute of limitations had expired. However, in a unanimous decision in January 2020, the California Court of Appeal for the First District reversed the dismissal and allowed the case to proceed.

After more than a year and a half of pre-trial hearings, the case settled in July, just weeks before a trial was scheduled to begin.

"In the year and a half that ensued, the case was remanded to the superior court," one of Brome's attorneys, Gay Grunfeld, told the Bay Area Reporter. "Discovery was quite robust. We inspected three area offices and we took 32 depositions — many lasting more than a day."

Also speaking to the B.A.R., Brome said that he feels justice was done.

"I'm always told justice is the process, not the outcome," Brome said. "We made the process work."

'A powerful message'
Brome, 57, first filed suit in September 2016. He claimed that his co-workers demeaned him with homophobic epithets and comments, and that one even held a gun to his head as the result of his sexual orientation. He claimed one man who harassed him, Steve Ramos, was promoted and became a commander in San Francisco.

The CHP did not respond to a request seeking comment on the settlement. The San Francisco CHP office forwarded a B.A.R. request to interview Ramos to the CHP Golden Gate Division, which forwarded the B.A.R. to CHP Public Information Officer Sergeant Raul Gonzalez, who told the B.A.R. to email the request in writing. That email has not been returned as of press time.

Brome said one reason he'd been initially attracted to working in San Francisco was because he'd initially thought there'd be a friendly work environment there for queer officers.

"I'd work my full shift and not see another officer," Brome told the B.A.R. last year. "This was an office of 30-40 people. It got to be too much. It's all these things that triggered it."

His case was dismissed in March 2018, with the Solano judge ruling that it couldn't go forward because of the statute of limitations. It was then that Brome got the assistance of the San Francisco firm Rosen Bien Galvan & Grunfeld LLP, which Grunfeld said specializes in appeals.

"I was so lucky to have Gay Grunfeld to build a case," Brome said.

The appellate court reversed the lower court's ruling by adding 285 days to the period to which the statute of limitations applies — which was one year — because Brome's workers' compensation case was pending for that amount of time.

"The case has been long, long-fought, and challenging," Grunfeld said. "But Jay is such an amazing fighter. This sends a powerful message to the California Highway Patrol that they need to reform how they treat LGBTQ officers."

Brome and Grunfeld both bemoaned that the CHP doesn't do outreach to the LGBTQ community. Brome said that there's no excuse why, for example, the CHP doesn't celebrate Pride Month with social media posts, or by participating in the LGBTQ Pride festivities.

He said that the pre-trial preparation was a learning experience for his former colleagues.

"Hopefully, with all the depositions, a lot of people who didn't know about my case learned about it through that process," Brome said. "Other people will now be able to use my case in their cases about statutes of limitations and worker's compensation."

Grunfeld said that the CHP needs to put in the effort to create an LGBTQ affinity group, and have an ombudsman, or public advocate, to investigate complaints.