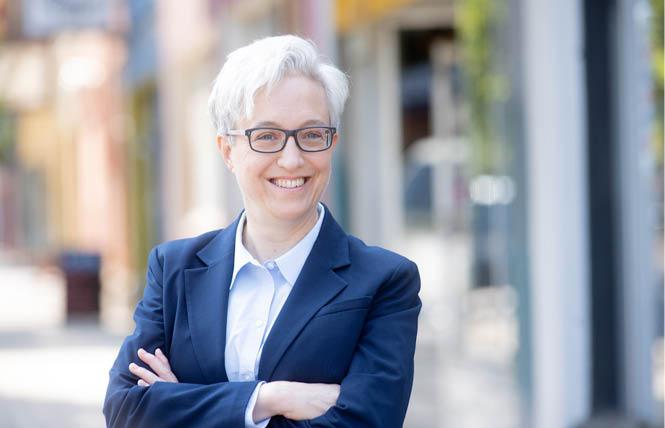 Tina Kotek, Oregon speaker of the House, announced that she is running for governor next year. Photo: Tina Kotek campaign

Voters in Oregon could elect the country's first lesbian governor next year and only the second LGBTQ top statewide official in the three-state West Coast region. Oregon Speaker of the House Tina Kotek is running for the open gubernatorial seat and is already attracting significant support for her campaign.

The state's LGBTQ advocacy organization Basic Rights Oregon, along with national groups the LGBTQ Victory Fund and LPAC, both of which work to elect LGBTQ candidates across the country, jointly endorsed Kotek September 29 a day ahead of her 55th birthday. Her first political hurdle in the campaign will come in May when the state holds its primary election for the contests on the ballot next November; state Treasurer Tobias Reed, 46, a fellow Democrat and former state representative, is also running to be governor.

"Tina Kotek is a trailblazer. In 2006, she was the first openly lesbian legislator elected into Oregon House. Six years later, she became the first LGBTQ2SIA+ speaker of the House, a title she has longer than any other in our state's history. Her leadership goes beyond identity, she fights for a better Oregon for all of us," said Nancy Haque, executive director of Basic Rights Oregon.

"A victory for Tina would shatter a lavender ceiling and be a milestone moment in LGBTQ political history, yet she is running not to make history, but because there are few people as prepared and qualified to serve as Oregon's governor," said Victory Fund President & CEO Annise Parker. "Under Tina's leadership, Oregon has led in passing legislation to improve roads and education, raise the minimum wage, and ensure all residents are treated fairly and equally. As governor, Tina will make Oregon a role model for the nation."

LPAC Executive Director Lisa Turner said Kotek's "governing experience and political leadership will allow her to hit the ground running, and we're excited to see her make history as the first openly lesbian governor in the United States."

Kotek said she was "deeply grateful" to have the trio of LGBTQ groups backing her in the race.

"As the first lesbian speaker of the House in the country, I know firsthand how important it is for our community to be at the table when decisions are made," she said. "We have made significant progress toward full equality for the LGBTQ+ community, and there is still more to do. I look forward to continuing to work as Oregon's next governor to ensure our state remains a leader in the struggle for equality."

The first out female governor elected in the U.S. was the Beaver State's incumbent Democratic Governor Kate Brown, who is bisexual. She took office on February 18, 2015 following the resignation of John Kitzhaber and was elected in the gubernatorial special election in 2016.

At the time, Brown was the first out LGBTQ person to be elected governor in the country. She won a full four-year term in 2018 but, due to term limits, is barred from running again in 2022.

In 2004, then-New Jersey Governor Jim McGreevey came out as gay amid a sexual affair scandal that revealed he had cheated on his wife with the man he had appointed as his homeland security adviser. McGreevey resigned that November.

Colorado Governor Jared Polis, who recently married his husband, in 2018 became the first out gay person elected to lead a state. He is expected to face a tough reelection campaign next year.

Washington state won't hold a gubernatorial election again until 2024. And in California, no LGBTQ candidate is expected to run in the Golden State's 2022 gubernatorial race.

Democratic Governor Gavin Newsom, a strong LGBTQ ally who just beat back a Republican-led recall attempt, is now considered the frontrunner in next year's contest. None of the top-named Republicans who ran in the recall are seen as having a chance of beating Newsom in a general election matchup.

It is possible a progressive Democrat could try to run to Newsom's left, as under the state's jungle primary system the top two vote-getters regardless of their party affiliation in next June's primary will advance to the November election. Who is running in 2022 should become clear by March 11, the deadline for candidates to declare and file their nomination papers.

Massachusetts Attorney General Maura Healey, the first out gay state attorney general in the U.S., is mulling a gubernatorial bid next year. The Democrat is expected to make a decision this fall to either jump into the governor's race or seek reelection to a third term.

In California, gay Insurance Commissioner Ricardo Lara is seeking a second term next year. The first LGBTQ person to win election to statewide office in the Golden State, Lara is facing a challenge from Assemblyman Marc Levine (D-Greenbrae).

As of now, Lara is one of two out statewide candidates in 2022. Lesbian Sacramento County District Attorney Anne Marie Schubert, an independent, is running against Attorney General Rob Bonta, a former Democratic state Assemblyman from Oakland appointed to the state constitutional office earlier this year by Newsom. His wife, Mia Bonta, succeeded him in the Legislature, and the couple will both be seeking full terms to their respective elected positions on next year's ballot.

The Political Notes column is taking a hiatus and will return Monday, October 25.