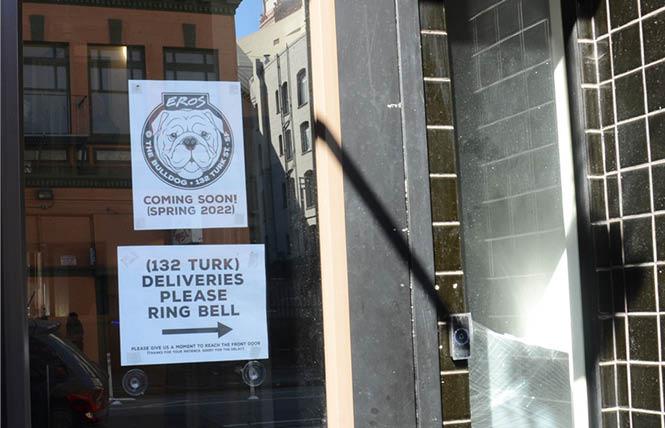 A final hurdle for reopening gay bathhouses in San Francisco should be removed by Pride Month. The proposed zoning change will also allow adult sex venues to operate in neighborhoods historically home to LGBTQ districts.

A prohibition against such businesses having locked rooms, enacted in the 1980s during the height of the AIDS epidemic, was officially lifted in early 2021. Yet zoning restrictions remain in place preventing adult sex businesses from operating in most of the city.

The issue is why Eros, the sex club for queer and trans men, has yet to open in its new Tenderloin location. In December, it closed its longtime home on upper Market Street and began moving into 132 Turk Street.

The building had been the site of the gay Bulldog Baths in the late 1970s and 1980s. More recently, a dog groomer and kennel using the name of the old gay bathhouse had operated in the space followed by an artist collective.

Today, the upper floors of the former bathhouse are being turned into apartments with the baths' historic address of 130 Turk Street. Eros is taking over the 4,000 square foot commercial space in the property.

It includes a mezzanine level where a play space is being constructed for Eros' patrons. There will be another play space on the ground floor and a locker room area, with plans to include one or two semi-private rooms with doors at a later date.

"So much of this space was totally ready for us," said Eros co-owner Ken Rowe. "If you know anything about sex clubs, a sex club is a mixture of dog kennel and artist collective. The existing rooms felt ready for us."

But Eros can't welcome patrons into its new space until the city updates its zoning for adult businesses due to a decision made by Zoning Administrator Corey Teague in December 2020. Teague had determined adult sex venues as defined by the city's health code were considered a type of adult business under the planning code.

Such establishments include adult bookstores, video stores, and theaters historically patronized by men in order to engage in sex with other men on site. They are broadly banned throughout much of San Francisco, including in such LGBTQ neighborhoods as the Castro, Upper Market, Tenderloin, and South of Market.

To lift the de facto adult sex business ban, gay District 8 Supervisor Rafael Mandelman introduced a cleanup zoning proposal at Tuesday's Board of Supervisors meeting. He had spearheaded the legislative drive to bring back traditional gay bathhouses in San Francisco.

"But just being allowed doesn't mean people can open them because there are all these zoning restrictions," said Mandelman. "They are not permitted uses in many parts of the city where it would make sense for them to open."

His new ordinance will update the definition for adult sex venues to include retail sales and service uses. It will also outright allow them to operate 24/7 in the Castro and on upper Market Street between Octavia Boulevard and Castro Street. They would also be allowed on Folsom Street between Dore Alley and Seventh Street, throughout SOMA west of Seventh Street, and on the 100 block of Turk Street where Eros plans to reopen.

Such businesses would need to seek a conditional use permit if they wanted to open in other parts of SOMA or in the Mission, Dogpatch, and Bayview. They would also need to seek permission to operate between 2 and 6 a.m. in those locations.

Because it would require a vote by the planning commission, residents of those areas would be able to weigh in on allowing an adult sex business to open.

"We are clearing a path so, as a planning and zoning matter, bathhouses can open where they make sense," said Mandelman, who expects his ordinance will be approved.

The planning commission must first take it up before the Board of Supervisors votes on it, likely in late April or May. By July, at the latest, Mandelman said he hopes to see operators like Eros open their doors.

Rowe expects to be given the go ahead to do so from planning staff as soon as the new zoning becomes law. In the meantime, Eros continues to This text will be the linkfundraise> to help recoup its moving expenses.

A short walk from the Powell Street Muni and BART station, the new location should be more accessible for patrons, predicted Rowe, who fields 20 calls a day on average about when Eros will be open again.

"We get guys at the door almost every day of the week," said Rowe.