Political Notebook: On the occasion of his 92nd birthday, Harvey Milk continues to inspire 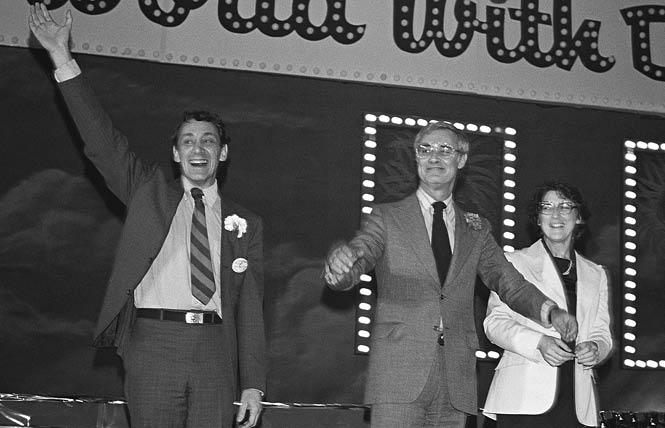 When the co-owners of the first gay bar in the southern Croatian city of Dubrovnik were considering what to call their establishment, they found inspiration from California. Milk, which opened May 7 in the historic center of the popular tourist destination on the Adriatic Sea, takes its name from the late gay San Francisco supervisor Harvey Milk.

"The name was inspired by Harvey Milk, an American politician and activist who fought for the rights of homosexuals," co-owner Vicko Lazo told the publication Slobodna Dalmacija. "Milk is the first public homosexual to be elected to public office in California or San Francisco. After all, the name is effective, easy to remember for both locals and foreigners."

Milk, who would have celebrated his 92nd birthday Sunday, May 22, continues to inspire people across the globe 45 years after his historic election to a seat on the San Francisco Board of Supervisors. He represented two of the city's most famous neighborhoods, the hippie enclave of the Haight and the then-burgeoning LGBTQ Castro district.

Over the years Milk became a global icon for the LGBTQ community, with cities in various countries honoring him with streets and plazas bearing his name. Since 2010 the state of California has marked May 22 as Harvey Milk Day, with an annual gubernatorial proclamation issued to denote the day of special significance.

"As evidenced by the 2008 Oscar-winning biopic 'Milk,' his message of compassion and hope rings as true today as it did almost forty years ago," writes playwright and performer Justin Elizabeth Sayre in their new book "From Gay to Z: A Queer Compendium" (Chronicle Books, $24.95) released May 10. "As Milk always reminded us, 'You gotta give 'em hope.'"

Ahead of this year's Milk Day observance Queer Serial History Podcast creator Devlyn Camp released the first two episodes of their seven-part series "Give 'Em Hell" profiling the late gay supervisor Harry Britt, who was appointed as Milk's successor by then-mayor Dianne Feinstein. It features unheard interviews between historian Will Roscoe and Britt about his time in office.

Also featured in the series is the audio will that Milk had recorded in case he was killed. The remaining episodes will be released over the coming weeks and can be found here.

Various events will be held May 22 in San Francisco to mark Milk Day. The Harvey Milk LGBTQ Democratic Club, the Castro LGBTQ Cultural District, the Castro/Upper Market Community Benefit District, and the Friends of Harvey Milk Plaza are once again taking the lead in planning the city's observance.

A block party in honor of Milk will be held from noon to 5 p.m. in Jane Warner Plaza, the public parklet at the intersection of Castro, 17th, and Market streets. After a roughly hourlong program music will be provided by mobile disco BAAAHS, short for the Big-Ass Amazingly Awesome Homosexual Sheep, and its flock of DJs.

Invited speakers include friends and colleagues of Milk's, including Kent Denning and Medora Payne Sobottka, and local elected officials such as gay District 8 Supervisor Rafael Mandelman, who represents the Castro and is scheduled to return from a junket to Israel that morning. Newly appointed gay District 6 Supervisor Matt Dorsey will also give remarks.

Sobottka, 58, who grew up on Liberty Street in a politically active Unitarian family, would get her film rolls developed at Milk's camera store in the Castro and later, as a teenager, volunteered there during his unsuccessful bid for state Assembly in 1976. She returned in 1977 to help elect him to his supervisor seat, though she told the B.A.R. she remembers more the night that Milk lost to Art Agnos in the legislative race.

"I was really excited when he won but I remember the one he lost to Agnos more. I was at the quote unquote hopefully victory party at the Island restaurant. My friend and I came up with a victory song," said Sobottka, a straight woman and teacher in Davis who told the B.A.R. has a lot of lesbian friends. "I worked on that (supervisor) campaign too but I don't remember if I went to what turned out to be his victory party. I went to go to the camera shop the next day and say 'Woo-hoo!' with everybody. I was always very sad that I never did go to visit him in City Hall."

Noting that Milk's birthday is 11 days after her own, Sobottka recalled that the two were on a first name basis, though she "took her marching orders" from his campaign manager. Admitting that she is "the worst procrastinator in the world," Sobottka hadn't decided what the theme of her talk would be or written it yet when she spoke to the B.A.R. May 12.

Had Milk lived and continued on with his political career, he may not have become such a globally revered figure in the fight for LGBTQ rights, suggested Sobottka.

"I think it was because of the circumstances of his death and Moscone's death," she said when asked about Milk's iconic status today. "I think if he had just served out his term and maybe went on to other things it would not have been such a cause célèbre. I don't know if every single cause needs a — I don't want to say martyr — it puts him up another notch."

The Castro Theatre will be screening the restored 35mm version of the Oscar-winning 1984 documentary "The Times of Harvey Milk" on Milk Day. The movie debuted at the historic theater and in recent years has been shown there for the unofficial state holiday.

This year, the theater is also showing "The Ruth Brinker Story," a documentary about the founder of Project Open Hand. Brinker began the nonprofit to help feed people living with AIDS in the mid-1980s. She died at the age of 89 in 2011.

The Milk documentary will screen at 11 a.m. followed by the Brinker film at 2 p.m. A double feature of both movies begins at 3 p.m. All of the screenings are free and un-ticketed, with seating on a first come, first serve basis.

A special benefit screening of the Brinker film will take place at 6 p.m. and includes a panel discussion and a post-film reception in the Castro Theatre mezzanine. Tickets cost $50 and must be purchased in advance online.

"As stewards of the LGBTQ icon that is the Castro Theatre, Another Planet is honored to help facilitate this special day which celebrates the lives and legacies of two community icons, Harvey Milk and Ruth Brinker," stated Mary Conde, senior vice president for Another Planet Entertainment who is in charge of the overall Castro Theatre Project. "This is exactly the sort of collegial, community partnership we look forward to continuing in years to come."

In addition to a celebration, Milk Day is also a time for people to reflect on the status of LGBTQ issues, said organizers, with Republican-led statehouses restricting the rights of their LGBTQ citizens, particularly transgender youth, and a pending ruling from the U.S. Supreme Court that could not only overturn a federal right to abortion but also same-sex marriage and other civil rights.

"With the skyrocketing number of anti-LGBTQ bills filed over the past several years, from 41 in 2018 to 238 in just the first three months of 2022, this Harvey Milk Day is a crucial moment to live out the words of Harvey Milk as we face the onslaught of homophobia and transphobia across the country," stated Jeffrey Kwong, a gay man who is the Milk club's vice president of events and fundraising.

For more information about this year's event, visit its Facebook page.

Gay SF leaders host fundraiser for Esteen
Two of Milk's gay successors on the Board of Supervisors, Mandelman and Bevan Dufty, who served in the District 8 seat in the 2000s, are co-hosting a fundraiser for gay registered nurse and union leader Jennifer Esteen, aiming to be the state's first Black female LGBTQ legislator. Like the three San Francisco out leaders, Esteen is Jewish.

She is running in the June 7 primary for the East Bay's open 20th Assembly District seat. Gay Dublin City Councilmember Shawn Kumagai is also vying to succeed Assemblymember Bill Quirk (D-Hayward), who opted not to seek reelection this year and has endorsed labor leader Liz Ortega, who is straight, in the race. The top two vote-getters next month will advance to the November general election.

Lesbian Rabbi Sydney Mintz of Congregation Emanu-el in San Francisco is also lending her name to the fundraiser being held from 5 to 7 p.m. Tuesday, May 31, at Dufty's home in the Castro district. Suggested donations beginning at $100 are being asked of attendees.

To RSVP and receive the address for the event, email bevan.dufty@gmail.com

Web Extra: For more queer political news, be sure to check http://www.ebar.com Monday mornings for Political Notes, the notebook's online companion. This week's column looked at where various candidates in the Bay Area stand on the issue of single-payer health care.