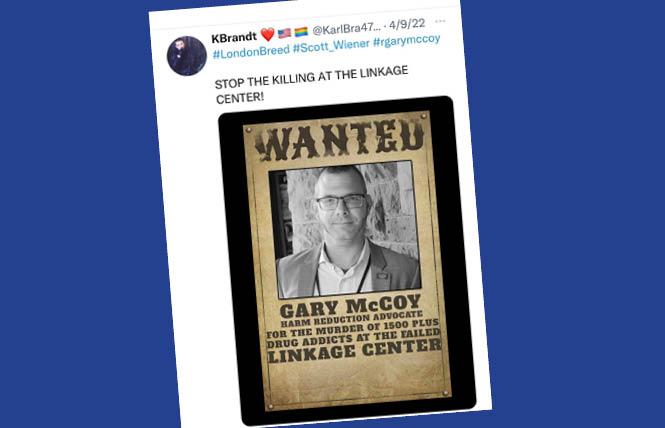 The lawsuit, filed May 9 at San Francisco Superior Court, alleges that Sandberg, who has appeared on air as a personal finance expert at San Francisco-based KRON-4 and is a regular contributor to U.S. News and World Report, retweeted April 18 the meme about McCoy, vice president of policy and public affairs at HealthRIGHT 360, a California-based health conglomerate. (McCoy is also a co-chair of the Alice B. Toklas LGBTQ Democratic Club and previously served as a district staffer for House Speaker Nancy Pelosi, D-San Francisco.)

McCoy's attorney, Alex Lemberg, who identifies as nonbinary, called the murder allegation against their client "jaw-dropping and patently false." A spokesperson at the San Francisco Department of Public Health told the Bay Area Reporter there have been no deaths at the Tenderloin Center. The facility remains open.

The Twitter meme, initially created by someone under the pseudonym Karl Brandt at @KarlBra47328382, was picked up by San Francisco-based Sandberg who retweeted it to her more than 8,000 followers. It depicts a photo of McCoy on an Old-West-themed wanted poster with a caption in all caps reading "Wanted Gary McCoy harm reduction advocate for the murder of 1500 plus drug addicts at the failed Linkage Center." The image has been retweeted dozens of times, according to Lemberg.

As a result of the Twitter postings by Brandt and Sandberg, "Mr. McCoy has feared for his life and the safety of his loved ones following these false allegations," Lemberg wrote in a news release. "False accusations of murder posted publicly, without context, endanger the victim's life, family, and livelihood."

The use of the name Karl Brandt, according to Lemberg, is not insignificant.

"Notably, there is no living person named Karl Brandt in San Francisco," stated Lemberg, "most likely because historically, Karl Brandt was the personal physician to Adolf Hitler, sentenced to death at Nuremberg in 1946 for crimes against humanity."

The use of Nazi emblems and swastikas appears throughout Brandt's postings, as evidenced by the Twitter account that remained active as of May 11. The accusation that McCoy is responsible for the deaths at the Tenderloin Center strikes particularly close to home as McCoy, who has been sober for 11 years, according to Lemberg, struggled with addiction for many years and has spent much of his professional life helping others in the same situation.

In August 2021, McCoy embarked on a hunger strike outside San Francisco City Hall to try and convince city leaders to declare an emergency around the city's growing overdose crisis. The strike lasted 60 hours before seven city supervisors were convinced to support his effort. The Tenderloin emergency declaration, approved by the Board of Supervisors after a marathon meeting December 24, was an outgrowth of that effort.

Efforts to speak with Lemberg were unsuccessful. A message to Sandberg was not immediately returned Wednesday.