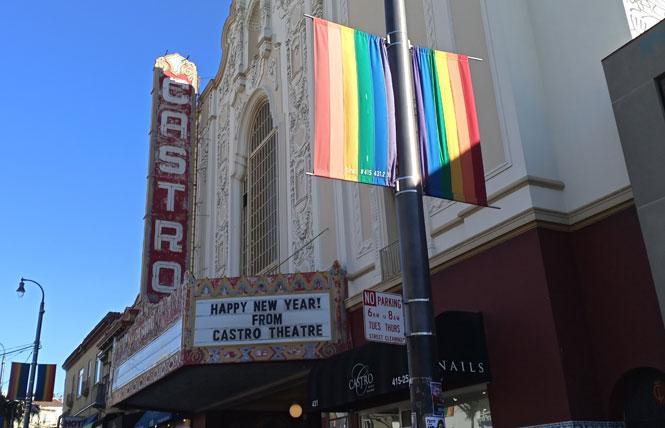 Supervisor Rafael Mandelman introduced a resolution May 10 that would enhance the city landmark status of the Castro Theatre. Photo: Scott Wazlowski

The Castro Theatre, which was designated City Landmark #100 in 1976, may see an enhancement of that designation later this year if a resolution by gay District 8 Supervisor Rafael Mandelman is approved.

Mandelman submitted the resolution during the May 10 meeting of the San Francisco Board of Supervisors. It seeks to amend the historic theater's landmark status by broadening the designation to include "the full historical, architectural, aesthetic and cultural interest and value of the Castro Theatre," as opposed to the current designation that only covers the building's elaborate California Churrigueresque facade.

The theater, which was built in 1922, came under new management in January when Another Planet Entertainment, a live-music promotion company based in Berkeley, announced it would assume management of the site. That announcement prompted much hand-wringing and anxiety among those who feared that APE's focus on live events would spell the end of LGBTQ-oriented programming at the cinema.

A meeting between APE, the Castro LGBTQ Cultural District, and numerous community stakeholders May 11, and facilitated by Mandelman, evidently did little to assuage the fears of Tina Valentin Aguirre, manager of the cultural district.

"Another Planet Entertainment remains opaque in terms of their plans," said Aguirre, who identifies as a genderqueer Latinx person, in a phone interview with the Bay Area Reporter. "They have not shared much of anything in terms of commitments to queer culture producers."

Aguirre pointed to the lack of contracts for events in 2023 as one example of APE's lack of commitment to maintaining a strong focus on LGBTQ-centered programming. David Perry, a gay man and spokesperson for APE, disagreed with that assessment.

With significant renovations planned at the theater, Perry said, to say nothing of the anticipated length of the approval process as plans drawn up for the cinema wend their way through the San Francisco Planning Commission, it simply isn't possible to commit now to any programs for next year.

"We don't know when the theater is going to reopen," he said. "It goes through a process and we're not in control of the process. The preliminary drawings are just that, preliminary."

While plans for a follow-up meeting have been discussed with Mary Conde, senior vice president of Another Planet, no date has yet been set. Mandelman "will remain available to facilitate dialogue," said his gay legislative aide Jacob Bintliff.

In the interim, Another Planet management continues to seek to assure () the public that it is very sensitive to those concerns. At the May 5 meeting of the Castro Merchants Association, APE project manager Margaret Casey stated, "The Castro is a crown jewel for that kind of programming."

There has been much concern, too, about the impact of proposed renovations to the theater's elaborately decorated interior, which Mandelman's resolution seeks to address.

Bintliff told the B.A.R. that "APE has not signaled opposition to this update of the designation, with the understanding that the plans they have already submitted will trigger [Historic Preservation Commission] review and approval of their proposed work."

Mandelman's move has plenty of support at the Castro LGBTQ Cultural District, as well.

The proposed resolution, however, only starts a multistep process.

"The next step after today will be a hearing at the board's land use committee to approve this resolution (tentatively May 23)," Bintliff wrote in an email to the B.A.R., "and once the resolution is passed by the full board (tentatively May 24), the planning department will prepare a report that will inform a Historic Preservation Commission recommendation on whether and how to update the existing historic landmark."

The HPC hearing will probably happen in late summer, Bintliff added, "and based on their recommendation, the supervisor would then introduce an ordinance to officially amend the existing landmark designation that would also go to the land use committee and full board for approval, as soon as September."

Updated, 5/18/22: This article has been updated with additional comments.