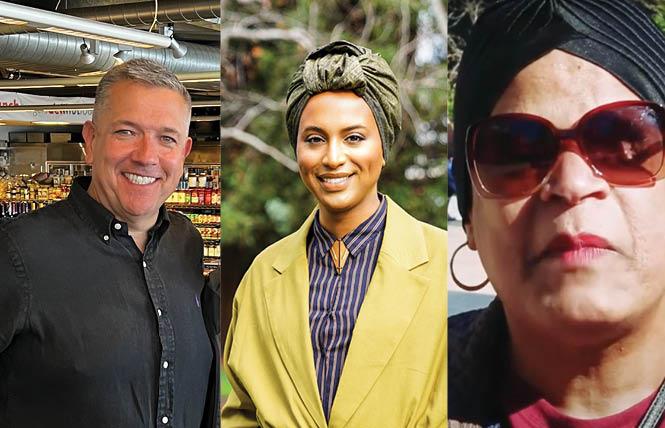 The appointment of Matt Dorsey May 9 as the first gay supervisor of District 6 marked the official beginning of the race for the San Francisco Board of Supervisors seat on the November election. At least two Black transgender leaders are planning to also compete for a four-year term representing the city's South of Market, Treasure Island, and Mission Bay neighborhoods.

"I am someone who has had 20 years of experience getting people off the streets and into care as a social worker," said Mahogany, who worked in the East Bay and in San Francisco in various capacities to provide support to LGBTQ youth, the homeless, people living with HIV and other individuals in need of help.

For the past four years Mahogany served as the de facto chief of staff to former supervisor Matt Haney, who was elected last month to the city's 17th Assembly District seat. Mahogany was one of the people who had sought to be appointed by Mayor London Breed to serve out the remainder of Haney's term through the end of the year.

Having worked alongside Haney to address the district's needs, from building thousands of units of housing to providing services to residents, "that is what is going to matter for the voters," argued Mahogany, who is also a drag queen and part of the collective that owns the queer Stud Bar and is looking to reopen it somewhere in SOMA.

Also vying to become the first Black transgender supervisor is Ms. Billie Cooper, who had pulled papers to seek the seat last year when it was thought District 6 would continue to include the Tenderloin where she had long lived. But the city's redistricting task force last month moved the home of the city's transgender cultural district into District 5.

Meanwhile, a water leak in her apartment last year forced Cooper to move into the Trinity Plaza apartments at Market and Eighth streets, where Dorsey has lived for 12 years. Her forced relocation turned out to be serendipitous as Cooper continues to be a District 6 resident and is planning to run for the redrawn seat. She has already been fundraising for her campaign and has been getting new signatures from District 6 residents to qualify for the ballot in order to replace the ones she had gotten from Tenderloin residents that are no longer valid.

Told Monday by the B.A.R. of Dorsey's appointment to the supervisor seat by Breed, Cooper said she was surprised that Mahogany was not picked. A Navy veteran who is living with HIV and has been in recovery for 22 years due to addictions to cocaine and crack, Cooper questioned Dorsey's bona fides for being elected to a full term this fall.

Seeming to intuit that such questions will be raised about him on the campaign trail, Dorsey, who is white, laid the groundwork for his response to them at his swearing-in ceremony. One speaker, Gloria Elle, noted that as a woman of color and a mother who has worked with Dorsey to advocate for the needs of residents in the district she felt that "Supervisor Dorsey understands our challenges."

Breed administered the oath of office to Dorsey, who is also living with HIV and in recovery for alcohol and drug addictions, at an outdoor ceremony Monday in the courtyard of Delancey Street, the nonprofit provider of services to substance abusers with a restaurant on the city's Embarcadero in District 6. Brothers John and Bill Maher, the latter of whom served on the Board of Supervisors from 1983 to 1995 and also struggled with addiction, co-founded the agency in 1970.

"Matt Dorsey represents what recovery can be when we provide the right opportunities to people who are struggling," said Breed, who introduced the new supervisor as "an extraordinary human being."

In the audience was the assemblymember Haney succeeded, David Chiu, who had vacated the seat in the fall after Breed named him city attorney. Chiu succeeded Dennis Herrera, whom Breed named general manager of the city's public utilities agency. As city attorney, Herrera had hired Dorsey to be his chief spokesman and worked closely with him in that role for 14 years.

"San Franciscans benefited from Matt Dorsey for some two decades, they just didn't know it," Herrera told the B.A.R., referring to the largely behind-the-scenes work that Dorsey did while working in the city attorney's office and more recently as Police Chief William Scott's director of strategic communications. "San Franciscans benefited and it's great that they will now have him as a supervisor to continue his great work."

Herrera and Scott both spoke during the swearing-in ceremony, with the police chief admitting he was "a little ticked because we are losing such a great guy."

Overlapping friendships
The upcoming election is sure to strain relationships among the city's elected officials and LGBTQ community due to the overlapping friendships and connections that Mahogany and Dorsey, as well as Cooper, have formed over their decades of living and working in San Francisco. Dorsey, for instance, was one of the few LGBTQ leaders who had backed Haney in the Assembly race rather than his gay opponent, former District 9 supervisor David Campos.

Yet Haney is unequivocal about his belief that Mahogany is best suited to be elected supervisor of District 6. He reiterated his support for Mahogany in the race to the B.A.R. this week while noting he has known Dorsey for years.

"It's not at all personal. It is about who I strongly believe is best to represent this district," said Haney. "We have seen in the past many times the mayor chooses someone and the residents from their own experiences and needs choose someone else. I think that will be the same case this time, and I hope it will be."

Haney, who also received the backing of Breed in his bid for the Assembly seat, also stressed to the B.A.R. that he doesn't view the supervisor race as being a proxy battle between himself and the mayor.

"It is about who is best to represent the district," said Haney, and on that point he argued that not only is Mahogany "brilliant" but someone who "works well with everyone she meets. She is not an ideologue and is not a divisive leader."

The awkward position many LGBTQ leaders in the city now find themselves was evident in the various members of the Alice B. Toklas LGBTQ Democratic Club, of which Mahogany is a board member, in attendance at Dorsey's swearing in who declined the B.A.R.'s requests for comment. Most deferred to the club's official statement, released as the ceremony was taking place.

While it commended Breed for naming Dorsey, it also acknowledged she had an "abundance of talented candidates" to choose from, including Mahogany. It added that both are "incredibly qualified LGBTQ candidates."

The club's statement concluded, "We applaud the mayor's decision, are thrilled to increase our LGBTQ representation with this appointment, and look forward to working together to increase lesbian and trans representation."

Gay District 8 Supervisor Rafael Mandelman demurred when asked by the B.A.R. about what impact Dorsey's appointment will now have on the contest for the seat. He did say that Dorsey "is a very strong appointment" because "he has experience with the most pressing issues in San Francisco right now."

Lesbian arts commissioner Debra Walker, who lost her bid for the District 6 supervisor seat in 2010 then saw her residence be redistricted into District 9, had publicly endorsed Breed's appointment of Dorsey to the vacancy. She told the B.A.R. at Monday's ceremony that she has confidence in his being able to address the various needs of his neighbors now constituents.

Candidates have until early June to file for the District 6 supervisor race. Voters will be able to rank their choices under the city's instant-voting system with those candidates receiving the least votes eliminated and their voters' next choice tabulated until one candidate receives more than 50% of the vote.

Web Extra: For more queer political news, be sure to check http://www.ebar.com Monday mornings for Political Notes, the notebook's online companion. This week's column reported on the various LGBTQ candidates campaigning off the leaked U.S. Supreme Court draft ruling that would overturn a federal right to an abortion.