Out in the Bay: US Supreme Court draft abortion decision leak shows threats to queer rights too 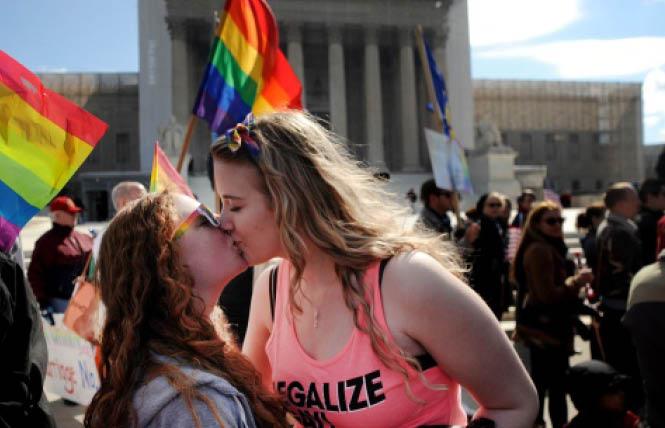 Demonstrators in front of the U.S. Supreme Court in March 2013, as the court heard arguments on part of the 1996 Defense of Marriage Act. Photo: Olivier Douliery/Abaca Press/MCT

LGBTQ civil liberties may indeed be threatened by abortion cases now before the conservative-heavy U.S. Supreme Court. Those cases include Dobbs v. Jackson Women's Health, the Mississippi case in which a draft majority opinion was leaked to Politico May 2.

Along with abortion rights, LGBTQ people's rights to marry whomever they want; to have consensual sex however and with whomever they like; to use a condom, other protection or birth control; and to have gender-affirming surgery may also be at risk.

Federal courts correspondent, Lisa Keen, who writes for the Bay Area Reporter and other outlets, told Out in the Bay — Queer Radio + Podcast host Christopher J. Beale this week that she found the leaked draft opinion, written by Justice Samuel Alito, "shocking" on many levels.

"The draft shows that the majority is planning to go to an extreme," Keen said. "They're prepared to allow states to ban abortion at any point in a pregnancy and ignore any concern for the mother's life or well-being."

Especially alarming for LGBTQ people in the leaked draft is language saying courts should generally defer to state legislatures, said Keen, which are "growing more and more extreme ... In Florida, they're attempting to ban teachers from even mentioning the existence of a gay person." (Opponents have dubbed this the "Don't Say Gay" bill, which Governor Ron DeSantis signed into law. It goes into effect July 1.)

"If it becomes OK for states to say whether or not a woman must carry her pregnancy to term whether she wants to or not, whether it threatens her life or not," said Keen, "it doesn't seem at all far-fetched for the court to say it's okay for states to regulate other very personal decisions concerning one's bodily integrity ... who you have sex with, whether you choose to have your uterus or breasts removed, whether you request transition surgery, or use PrEP or use a condom."

Eric Jansen is founding host and managing producer of Out in the Bay — Queer Radio + Podcast. Learn more and listen here.

Christopher J. Beale is a queer independent radio host, producer, and journalist based in San Francisco. He produces and hosts the "Stereotypes" podcast and contributes to the Bay Area Reporter.

Out in the Bay: Why everyone should care about Supreme Court abortion cases
Sign up!