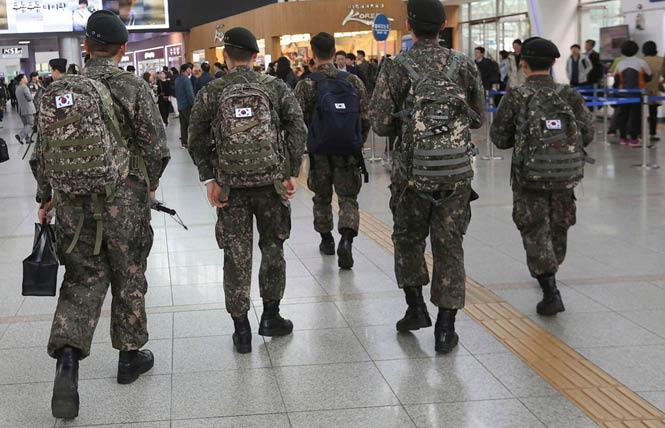 The Supreme Court of South Korea has tossed out the military court conviction of two gay soldiers for having consensual sex outside of military facilities.

The court's panel of 13 justices ruled April 21 the military's case stretched the country's military sodomy law and sent the case back to the High Court for Armed Forces.

Chief Justice Kim Myeong-su said the justices concluded that the widely criticized 1962 Military Criminal Act's Article 92-6 law should not be applied to consensual sex between male service members outside of military facilities during off-duty hours, reported the Associated Press.

The law prohibits members of the military from engaging in same-sex conduct in the country's predominantly male military and carries a two-year prison sentence.

Homosexuality is decriminalized in South Korea for civilians.

The case wasn't the first time the high court had received complaints about the law. At least three different times the court upheld the military law, most recently in 2016, AP reported.

Amnesty International East Asia researcher Boram Jang called the military's law a longtime "shocking violation of human rights" in an email statement to the Jurist, a legal news site operated in collaboration with the University of Pittsburgh.

"Today's ruling should pave the way for military personnel to freely live their lives without the threat of prosecution," Jang wrote.

Amnesty International reported on the destructive impact of criminalizing LGBTQ South Korean soldiers' serving in the military in its 2019 report, "Serving in Silence: LGBTI People in South Korea's Military."

Chief Justice Kim Myeong-su said that he recognized that society and time have changed ideas on what "constitutes as indecency."

"The view that sexual activity between people of the same sex is a source of sexual humiliation and disgust for objective regular people and goes against decent moral sense can hardly be accepted as a universal and proper moral standard for our times," the chief justice continued.

A supreme court news release declared "consensual same-sex sexual activity (among military service members) could no longer be considered as punishable in itself."

The court's decision could potentially provide insight into its fourth review considering the constitutionality of the military's ban on same-sex relationships.

According to Amnesty International, since 2002, the court has upheld the law three separate times.

The case
In 2017, military prosecutors charged the defendants, an unidentified army lieutenant and sergeant from different units, for having sex at an off-base residence during off-duty hours in 2016.

The two men were charged during a military crackdown where at least nine soldiers were indicted, reported the AP.

The military high court upheld a lower court's convictions against the two men based on Article 92-6. The lower court suspended their prison terms.

In a statement, the Seoul-based Center for Military Human Rights welcomed the decision and said the court "set a new judicial precedent that could help tackle discrimination against sexual minorities in the military and strengthen protection of their privacy."

The organization called for the court to "acquit all service members charged with violating Article 92-6" and for the court to quickly complete its review of the "outdated and bad" law and declare it as "unconstitutional."

Last year, the district court in the city of Daejeon ruled that the army unlawfully discriminated against South Korea's first known female transgender soldier, Byun Hui-su. The military discharged the 22-year-old staff sergeant for having a "mental and physical disability" after she underwent gender confirmation surgery. The court ruled in favor of Byun Hui-su seven months after she was found dead in her home.

South Korea's Defense Ministry said it will "carefully examine" the court's decision while proceeding with the case that was sent back to the military court, reported the AP.

Human Rights Watch and openDemocracy are accusing Kenyan police of forcing the grieving family and friends of Sheila Adhiambo Lumumba, 25, to find answers on their own following the discovery of Lumumba's body April 17.

"They're not doing much, at least not what is expected of them," John Lumumba, Sheila Lumumba's father, told openDemocracy. "There is nothing much going on. There is not much progress."

One of the victim's cousins, Laura Ocieng, told openDemocracy that she discovered the potential weapon, a "bloodied knife 'hidden' among Sheila's clothes," while gathering Sheila Lumumba's belongings April 27, the organization reported. HRW reported that a razor blade was also found in the victim's bedroom.

Ocieng told openDemocracy that police claimed they were unable to find a weapon during their initial gathering of evidence at the crime scene. She handed the knife over to the police, she told the organization.

No arrests have been made.

Sheila Lumumba's cousins, with the help of family friends, are leading the search for answers to what happened to them because police have failed to investigate and update them on the investigation, HRW and openDemocracy reported.

A family friend discovered CCTV footage of Sheila Lumumba leaving a bar in the company of three men sometime on April 14, reported HRW. It is believed that is the last time they were seen alive. The video was turned over to Kenyan police.

Another cousin of Sheila Lumumba's, Brenda Akinyi, told HRW, "the family is desperate to receive the results of a toxicology report that they requested."

Akinyi said the family hopes "that [Sheila] Lumumba was unconscious during the attack."

"I really think the police failed us from the start," Ocieng told openDemocracy.

Sheila Lumumba worked as a supervisor at FK Resort & Spa. Their body was discovered naked in their bedroom in their Karatina home in Nyeri County by some of their co-workers, according to HRW. Their co-workers searched for them after they did not show up for work April 15 and they did not answer their phone, reported openDemocracy.

Karatina is in central Kenya, about three hours north of Nairobi, the country's capital.

According to HRW, which reportedly saw the autopsy report conducted by Karatina Sub-County Hospital, Sheila Lumumba was raped, "stabbed several times in the chest, face, neck, and eyes, hit on the head with a blunt object," and "one of their legs was broken."

In an April 21 Facebook post, LGBTQ activist Njeri Wa Migwi mourned Sheila Lumumba's death and alleged they were killed for being queer.

"I just spoke to Sheila's Lumumba best friend today, and we cried together. Today Sheila is dead, six men broke into her house and gang-r*ped her, further broke her leg according to the autopsy and killed this beautiful beautiful human in Karatina town," she wrote. "Why? Because she was a lesbian. My heart is beyond broken."

LGBTQ Kenyans routinely face discrimination and violence due to their sexual orientation and gender identity.

Kenya's National Gay and Lesbian Human Rights Commission said what happened to Lumumba is not a one-off, reported My Joy Online.

"It bears mentioning that unfortunately these are not isolated incidences and are part of a pattern of attacks and violence against LGBTIQ+persons in the country," the organization tweeted.

It bears mentioning that unfortunately these are not isolated incidences and are part of a pattern of attacks and violence against LGBTIQ+persons in the country#JusticeForSheila— #Repeal162 because #LoveIsHuman (@NGLHRC) April 21, 2022

In 2021 the hashtags #JusticeForErica and #JusticeForJoash were trending following the killings of Erica Chandra, a trans woman and activist, and LGBTQ activist Joash Mosoti, reported My Joy Online.

Sheila Lumumba's killing has relaunched the debate on LGBTQ rights in Kenya with trending hashtags #JusticeForSheila and #ProtectQueerKenyans.

In a social media campaign, Sheila Lumumba's family and LGBTQ activists around the world are calling on authorities to investigate the case and bring the perpetrators to justice. HRW called upon Kenyan police to immediately conduct a thorough and transparent investigation into the case. The organization called for Kenya's Directorate of Criminal Investigations and the National Police Service Commission to release statements condemning the attack.

The organization also called for Kenya's government to repeal its discriminatory laws criminalizing homosexuality and reform the country's gender-based violence policies to protect the rights of LGBTQ people.

John Lumumba, who told openDemocracy that he never spoke to Sheila Lumumba about their sexuality or gender identity, said, "I'd like to know who did this."

"It does not matter what or who [Sheila] was. I would like to know exactly what happened to [them]. I want to see the culprits caught," he said.

An investigating officer declined to comment on the case, reported openDemocracy.