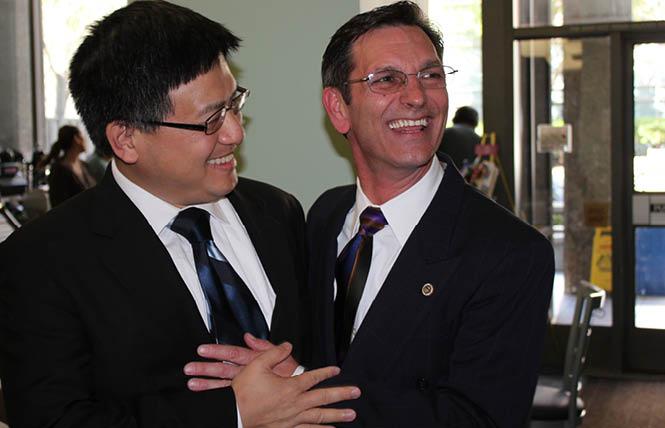 Kenneth William Topper, a gay man and longtime state government worker in Sacramento, died April 17 at his home in Arden, North Carolina. He was 65.

According to an online obituary posted by his family, his passing was unexpected. He had worked in California state government for over 20 years in various capacities and was involved in charitable organizations.

Mr. Topper was known in LGBTQ activist circles and media outlets as the person responsible for getting the rainbow flag flown at the state Capitol in Sacramento. A Pride flag was raised above the dome of the Sacramento structure on Coming Out Day October 11, 1990. It was said to mark the first time the symbol of the LGBTQ community had flown at a state Capitol building in the U.S.

A 2019 Bay Area Reporter article recalled that event, as Governor Gavin Newsom had a Pride flag raised at the Capitol that June, and his office and Equality California had claimed it was the "first time" that had occurred.

The 1990 article in the Bay Area Reporter explained that the flag-raising was the result of a joint resolution passed October 10 that year by the Assembly and Senate. Mr. Topper, a past president of the Sacramento gay and lesbian River City Democratic Club and legislative aide to then-Senate Pro Tem Dave Roberti (D), had approached the late Senator Milton Marks (D-San Francisco) to introduce the resolution.

"It sends a message to all constituencies that we're as much a part of this society as any other minority or cultural group," Mr. Topper had told the B.A.R. at the time, adding that "the raising of that flag raises our visibility and it will enable people to be freer in acknowledging who they are."

Then-governor George Deukmejian (R) ordered the flag to be taken down shortly after it was raised, according to the article. The story also reported that state police had received threats from veterans who said they planned to shoot or burn the flag.

Former state assemblymember Dennis Mangers, a Democrat who represented an Orange County district in the late 1970s and early 1980s, told the B.A.R. in a phone interview that Mr. Topper and his then-partner, Stan Hadden, were very helpful when he came out as a gay man in 1981-1982.

Hadden was also involved in state government work, including its early response to the HIV/AIDS epidemic. He died in 1992.

Mangers said that Mr. Topper and Hadden joined what was then called the Capital Network, an early group of LGBTQ politicos and staffers that "met quietly during the Deukmejian administration," Mangers explained.

"He was devoted to gay civil rights," Mangers said of Mr. Topper.

There was a similar flag incident during a fundraiser for the Sacramento AIDS Foundation, with which Mr. Topper was involved, Mangers recalled. At its fundraiser at the Sacramento Convention Center, actress Jane Fonda was a special guest and organizers had received permission from then-mayor Anne Rudin to put the rainbow flag up. Mangers said it didn't last long, as the city manager at the time ordered it taken down some 40 minutes later. (Rudin died in November 2021.) Those were different times, Mangers pointed out.

"He was an amazing friend," Mangers said. "A fabulous young man. He and his partner helped many people who came out later in life and helped us navigate the new culture."

One of Mr. Topper's last government stints was working for Carole Migden (D), a lesbian and former legislator, when she served on the state Board of Equalization.

"Ken was dapper, friendly, liked by all he encountered," Migden wrote in an email. "He was a ballast in the early days of our struggle for equity and opportunity in Sacramento. He was a steady, welcomed presence in the corridors of power as he effectively worked to unite our often-divided community."

Mr. Topper was also involved in charity projects. Longtime gay activist and AIDS Memorial Quilt co-founder Cleve Jones told the B.A.R. that Mr. Topper was president of the Sacramento AIDS quilt chapter years ago. (The quilt is now under the stewardship of the National AIDS Memorial Grove in San Francisco after the NAMES Project, which had moved to Atlanta from San Francisco, closed up shop in 2020.)

Matthew Whitley said he will miss his longtime friend.

"He was truly a kind and loving man who impacted everyone he met," Whitley stated in an email.

Mr. Topper was born March 6, 1957 in San Francisco, where he grew up. He moved to Sacramento during the AIDS crisis as he and Hadden realized work to address the deadly disease was needed from inside state government.

Mr. Topper was preceded in death by his mother, Barbara, and sister, Sharon Topper. He was the oldest of five children. He is survived by his father, Charles Topper, and his brothers Robert, Peter, and Joseph Topper, and their families.

Updated, 4/29/22: This article has been updated to correct the name of Mr. Topper's sister, Sharon.