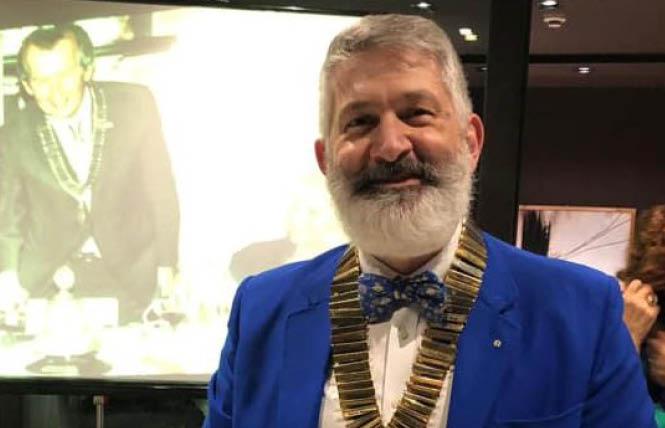 Paolo Rondelli has been named one of two heads of state in San Marino, the world's oldest republic. Photo: Courtesy San Marino

Rondelli, 58, was inaugurated as one of the country's two highest elected officials at a ceremony April 1. Oscar Mina, the other captains regent, was also inaugurated. Mina held the role in 2009.

The medieval city-state of San Marino is near the eastern coast of Italy and is one of Europe's microstates.

LGBTQ allies Marta Cartabia, the justice minister of Italy, and Italian Senator Monica Cirinnà were in attendance at the inauguration, reported Money Central.

"It's a historic day, that fills me with joy and pride, because Paolo Rondelli will be the first head of the state belonging to the LGBT+ community, not only in San Marino, but in the world," Cirinnà wrote on Facebook, calling him "a man of immense culture and diplomatic and political experience" who has fought for LGBTQ and women's rights."

The two men will be responsible for overseeing the country's parliament, called the Grand and General Council, the Congress of State, which is the actual government, and the judicial Council of XII. They won't vote or have executive power, but can veto.

Rondelli is the first openly gay head of state but he is not the first LGBTQ head of government. Other LGBTQ heads of government include Iceland's Johanna Sigurdardottir, who was the world's first out premier in 2009; lesbian Serbian prime minister Ana Brnabic [LINK: https://www.ebar.com/news///247423], who was elected by the country's parliament into the role in 2017; and Luxembourg's gay prime minister Xavier Bettel.

The oldest republic in the world, San Marino is one of the last remaining microstates in Europe. The third largest of the microstates, after Vatican City and Monaco, San Marino was founded in 301 A.D. Other microstates include Andorra and Liechtenstein.

San Marino is a Roman Catholic nation and is home to 35,000 residents. It is aligned with the European Union's foreign policies but is not a member state of the E.U.

Homosexuality was decriminalized in 2004. Same-sex marriage was legalized in 2016.

A South African regional court convicted and sentenced two men to life in prison April 5 for the so-called correctional rape of a lesbian teen outside her home.

On December 16, 2020, Getwin Moloto, 30, and Lebohang Makola, 35, from Saulsville, kidnapped and raped a 19-year-old lesbian while she was entering the gate to her home after "accompanying her partner," according to National Prosecuting Authority regional spokesperson Lumka Mahanjana, reported The Citizen.

A third accomplice was not at the Atteridgeville Regional Court in Pretoria where the trial took place. It is unclear if he was convicted.

On the night of the rape, Mahanjana told reporters that the two men and a third unidentified accomplice "grabbed her and carried her to a shack where they raped her."

The shack turned out to be Moloto's home.

Moloto kept on asking her why she was "taking their women" while he was raping her, Mahanjana said.

Makola reportedly continually asked the victim "to be his girlfriend" as he raped her.

The unidentified victim asked to go to the bathroom outside the shack. The men allowed her to go. As soon as she got to the door, she escaped and ran home, which was only three houses away.

She told her mother what happened. The victim was taken to the Laudium Thuthuzela Care Center for a medical examination, and the incident was reported to the police, Mahanjana said.

When the victim and her mother returned home, they found her underwear, which had been left in Moloto's shack, in their yard.

The victim recognized Moloto's voice, which also led to the arrest and prosecution of Makola.

Prosecutor Paulina Mochaka told the court that the offenders were influenced by their anti-LGBTQ attitudes toward the victim's sexual orientation.

She further stated that Moloto was a neighbor and was supposed to protect young women in the neighborhood but instead preyed on them with his friends, reported The Citizen.

Mochaka asked the judge to impose the prescribed minimum sentence.

Director of Public Prosecutions advocate Sibongile Mzinyathi said crimes that are influenced by hatred toward the LGBTQ community will not be tolerated and will be prosecuted, reported The Citizen.

Pink News reported that rape rates are extremely high in South Africa with nearly 10,000 cases between July and September 2021 alone.

Earlier this year, in a landmark verdict, three men were convicted in the Worcester Regional Court of the 2017 kidnapping and gang rape of a gay man in the Western Cape's Ceres region.

The judge was unable to include enhancing the sentence for a hate crime due to South Africa's Prevention and Combating Hate Crimes and Hate Speech Bill B9 of 2018 not yet being passed. [LINK: chrome-extension://efaidnbmnnnibpcajpcglclefindmkaj/viewer.html?pdfurl=https%3A%2F%2Fwww.justice.gov.za%2Flegislation%2Fhcbill%2FB9-2018-HateCrimesBill.pdf&clen=106625&chunk=true]

Ruth Maseko of the Triangle Project, who welcomed the verdict, told the Washington Blade, "People's attitudes need to change."

She said, "Sentences like these are sending a strong message that these crimes will not be tolerated."

Out in the World: Activists decry Bermuda Privy Council's ruling against same-sex marriage

Out in the World: SF rally calls on Biden administration to change US immigration policies
Sign up!