SF judge rules in favor of Castro bar The Mix 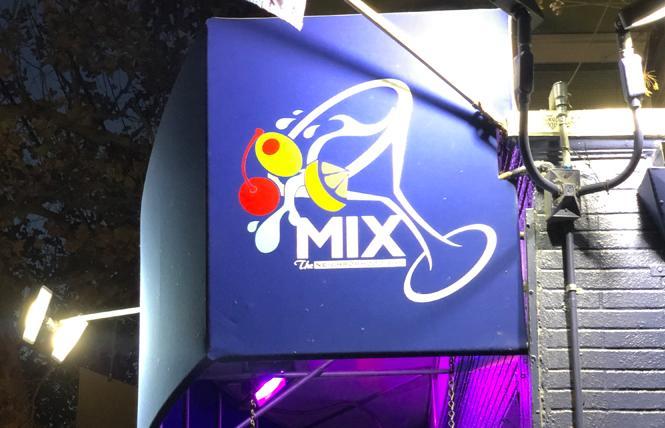 A legal battle involving shareholders of the Castro neighborhood bar The Mix is over after a San Francisco judge granted summary judgment in favor of the 18th Street watering hole.

In a March 23 decision, Judge Suzanne R. Bolanos of the San Francisco Superior Court ruled in favor of The Mix (referred to as TDG Inc.) and its shareholders Ross Crum and Virginia Crum-Ross.

Bolanos also ruled against Lawrence "Larry" Metzger, who initially brought suit against The Mix and his two former partners in October 2019. The Mix brought a cross-complaint against Metzger in June 2020.

"He maintains that the company, at the direction of Ross Crum, treated him improperly," Hakimi stated. "Nonetheless, Mr. Metzger remains committed to the success of The Mix and the Castro District, which remains his home."

John Hendricks, an attorney for The Mix, did not respond to multiple requests for comment by press time.

As the B.A.R. previously reported, the legal saga began when Metzger sued The Mix, Crum, and Crum-Ross for breach of contract after he was removed as a shareholder and subsequently fired from The Mix. Metzger had been a 35% owner and served as vice president of TDG Inc., according to the court filing.

He also claimed that Crum removed an obligation of $175,000 owed to Metzger by TDG Inc. between 2016 and 2017 "at his sole discretion, without any information or consent of plaintiff or approval of the board of directors" according to court documents.

The next year, The Mix filed a cross-complaint against Metzger claiming that he issued unauthorized checks of The Mix's assets to himself, exercised personal control over its property, breached his fiduciary duty to the corporation by accepting a position at a rival business, and even sold The Mix's alcohol there.

That court filing stated that Metzger "engaged in numerous instances of conduct detrimental to TDG," including his association with convicted arsonist David Munoz Diaz.

Diaz, 29, was sentenced to four years and four months of incarceration in 2020 on charges stemming from a 2018 incident when he allegedly lit a homeless person on fire. In November 2019, Diaz pleaded guilty to arson, possession of an incendiary device, and vandalism.

Diaz has been prosecuted for arson and other charges on multiple occasions in recent years. In 2014, Diaz stood trial for the June 2011 death of Freddy Canul-Arguello, 23, in Buena Vista Park. During the trial, Diaz testified that Canul-Arguello had asked to be choked during a sexual encounter and that he'd accidentally killed him.

But after his release in the Canul-Arguello case, Diaz was again arrested in 2015 after he was alleged to have started a series of fires in the Castro neighborhood, including at the Up Hair salon on 18th Street, adjacent to The Mix.

Diaz pleaded guilty to possessing an incendiary device in 2016 and was then made to register as an arsonist. Two months later, Diaz was again arrested for assault, battery, and false imprisonment after allegedly biting off a chunk of a man's scalp and handcuffing another man while impersonating a police officer outside of a south of Market nightclub.

The Mix's court filing stated that Diaz and Metzger lived together in 2015 when Diaz allegedly set fire to the hair salon, which led to The Mix having a criminal protective order to keep Diaz away.

"Metzger's association with Diaz caused TDG to pursue additional safety measures, such as security personnel to protect TDG's facilities, TDG employees, and the general public," the filing stated. "Local print and internet media, including the Bay Area Reporter, Hoodline, and SFist, reported on the situation. Upon information and belief, this caused harm to TDG's reputation, including public calls to boycott the bar, as well as a diminution of bar traffic and sales, thereby causing economic injury."

Furthermore, the filing stated that "Metzger escalated his conduct detrimental to TDG and began working for an unrelated business and competitor, a bar and restaurant located fewer than two blocks from SF Mix, as the competitor's on-site manager."

That competitor is the now-shuttered Hamburger Mary's on the 500 block of Castro Street.

"At the time of this competitor's 'grand opening,' on or about March 10, 2018, Cross-Defendant Metzger unilaterally and without the knowledge or consent of other TDG shareholders, caused SF Mix employees to transfer several cases of distilled spirits from SF Mix's alcohol inventory to the competitor, for sale to the general public and consumption at the competitor's premises. SF Mix is not licensed as a distilled spirits wholesaler nor was it reimbursed for the expense of lost alcohol believed to be at least several hundred dollars."

Before the summary judgment ruling was made, the case had been removed from the master court calendar for a case management conference that'd been scheduled for June 22.