Jones will be leaving Castro neighborhood home after all 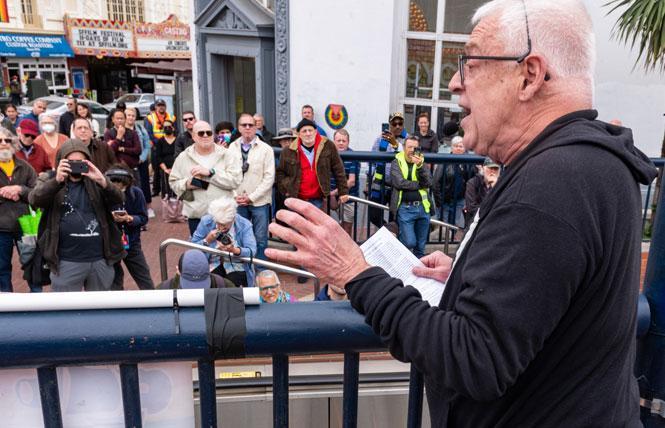 Longtime gay activist Cleve Jones will be vacating his Castro neighborhood home after all, bringing an end to a housing saga that made international headlines.

Jones confirmed the news in a statement to the Bay Area Reporter April 12.

"This struggle has already impacted my medical condition and distracted me from work that is important to me and my community," Jones, a longtime HIV survivor, stated. "My physician, closest friends, and family have urged me in the strongest terms to consider that a victory at the Rent Board would only win me the right to remain in an apartment where I no longer feel safe, further jeopardizing my health."

The B.A.R. first reported last month that Jones was leaving the Castro due to a tense landlord dispute he was having with Lily Li Pao Kue, the new owner of the building where he's been renting a rent-controlled unit. Jones has lived in the apartment for about a dozen years but has been involved in the neighborhood since its inception as an LGBTQ mecca.

Kue alleged Jones bringing Brenden Chadwick to live with him was against the lease. (Subsequently, Kue claimed Chadwick lived alone while Jones lived in Guerneville, and Chadwick, through Jones, has declined to comment.) Jones said that doesn't matter due to San Francisco rent laws.

Kue then alleged Jones' primary residence is in Guerneville, where he bought what he describes as a "very small cottage, under 1,000 square feet" several years ago after the publication of his 2016 memoir "When We Rise." Utilizing the Costa Hawkins law, she raised Jones' rent to $5,200 a month from $2,393. Jones alleged Kue wanted to push him out of the Castro unit so that she can put the unit up on Airbnb.

Kue has cameras trained on Jones' front porch area, both agree, and is doing construction upstairs.

Jones said he wanted to use his plight to draw attention to what he considers abusive behaviors by landlords. He wanted to emphasize that while he wasn't at risk of becoming homeless, many members of the hospitality union Jones works for, UNITE HERE, would be.

Jones, who worked with the late Supervisor Harvey Milk in the 1970s and co-founded the AIDS Memorial Quilt, held a rally in the Castro on March 27 that inspired him to reverse course and stay and fight.

"I was packing when Brenden and I decided we weren't going to fight it," Jones told the B.A.R. at the time. "I felt a great sense of relief — for about two hours. Then, I felt angry and ashamed."

Jones and Kue both contend they'd win at the San Francisco Rent Board. Jones argues that since he works and receives medical care in San Francisco, it is his primary residence. Kue argues that when Jones refinanced his mortgage in March 2021, Jones said it'd be his "principal residence" for at least a year, and that this means the North Bay town — long a second home and vacation getaway for many in the LGBTQ community — is his primary residence.

Jones told the San Francisco Chronicle that the mortgage agreement was only to provide assurance he would not lease his Guerneville property to others, or on Airbnb.

In his statement, Jones thanked those who demonstrated their support.

"I am grateful for the support of my neighbors and the larger community and hope we have at least helped to shine a light on the growing crisis of evictions in our city and beyond," he stated. "I will continue to fight for tenants' rights and call on the California Legislature to reform the Ellis Act and the Costa Hawkins Act and to pass meaningful legislation to protect renters and keep them in their homes."

When asked if he'd still be in San Francisco after moving out, he responded only, "I will vacate the apartment by the end of the month."

Kue also opted to only issue a brief statement, stating in part "I have hope again — for everyone — including Cleve to move on to the next chapter of peace and prosperity."