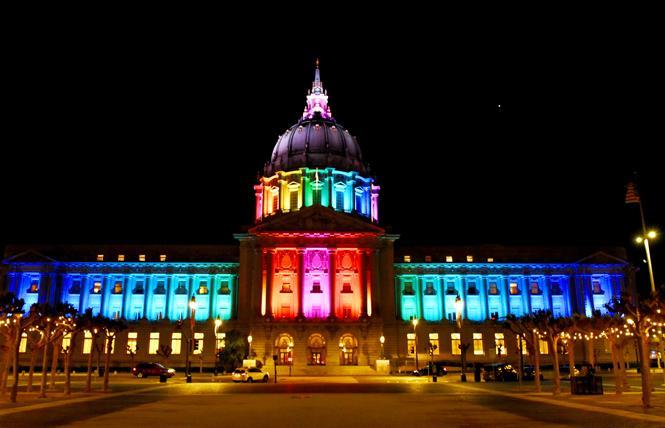 San Francisco's current three LGBTQ cultural districts could end up into three distinct new supervisorial districts under the map advanced Friday by the city's citizen redistricting panel. But talks will continue in the coming weeks before a final map is approved.

Under the proposed map the San Francisco Redistricting Task Force voted 5-4 in favor for at its March 25 meeting, dubbed Map 3B, the Tenderloin and Western South of Market would no longer be together in District 6. Meanwhile, the Board of Supervisors' lone LGBTQ member would remain in his current district.

Gay District 8 Supervisor Rafael Mandelman, who is up for re-election this fall, lives on the block of Valencia Street between 24th and 25th streets. One proposed map would have drawn him into District 9 represented by Supervisor Hillary Ronen.

But the newly proposed eastern boundary between Districts 8 and 9 would maintain that portion of Valencia Street in District 8. The line would be moved west to Guerrero Street starting at 24th Street and going north to Duboce Avenue.

Mandelman, who so far faces little opposition to his re-election bid, did not immediately respond to a request for comment Friday for this article.

Stephen Torres, Castro LGBTQ Cultural District advisory board executive co-chair, thanked the task force for largely keeping the current neighborhoods of District 8 together. He seemingly called for the district to include where Mandelman resides by saying that the Mission Dolores neighborhood should be "kept whole" in District 8.

At the northern and western ends of the district, the neighborhoods of Duboce Triangle, Buena Vista, and Corona Heights would be included in District 8, after members of those communities argued they wanted to remain tied with the Castro LGBTQ district by the same supervisorial boundary. A previous map would have split them off into District 5.

"Thank you for keeping our cultural district whole in the new map," said Torres. "There are a few places along these current boundaries we do feel need to be more inclusive of these neighborhoods."

The map a slim majority of the task force advanced Friday goes against the wishes of LGBTQ residents of the Transgender LGBTQ district in the Tenderloin and SOMA's western areas long home to the leather and LGBTQ communities. They have argued the two cultural districts should remain connected in one district.

An earlier map had proposed that the Tenderloin be joined with Chinatown and North Beach in District 3. Now the redistricting panel is looking at combining the Tenderloin in District 5 with Japantown, the Fillmore and the Haight.

The ping ponging of the transgender neighborhood between supervisorial districts has angered residents and trans leaders.

"What I gathered was the Tenderloin is not a priority but a variable used to offset populations in surrounding districts. This disregard to the Tenderloin is incredibly alarming to the soul of this city," Jupiter Peraza, the Transgender District program associate, told the redistricting panel Friday.

Another speaker criticized how the Tenderloin keeps "getting chopped up" in the various map proposals considered by the redistricting task force.

Leather & LGBTQ Cultural District Executive Director Robert Goldfarb echoed the calls to reject the "slicing off" of his district from both the transgender district and the SOMA Filipinas cultural district into separate supervisorial districts. He also asked that the area around Division and Harrison Streets be maintained with the rest of Western SOMA in the same supervisor district.

"It is extremely important the cultural districts remain together otherwise our influence and these communities of interest are being divided unfairly. They really need to stay together," said Goldfarb, adding of the triangular area bordered by Division Street, "there is no real reason to cut out one of the most important aspects of the leather district from our district and put it in another supervisor's district."

Task force member Jose Maria (Chema) Hernández Gil indicated he favored keeping the Tenderloin connected with SOMA in the new maps. He voted in the minority Friday against the map proposal favored by a majority of the panel.

"A new District 6 must include populations that live north and south of Market Street," he said. "We have no flexibility on that."

But task force chair Rev. Arnold Townsend argued that connecting the Tenderloin with the Fillmore, two of the city's largest Black communities, would ensure an African American person could be elected to the Board of Supervisors.

"Most set upon and diminished voting bloc and power in the city is the Black community and it has been that way for 20 years and getting worse," he said.

Member Lily Ho stressed that the maps will continue to be tweaked over the coming weeks.

"We know we have a long way to go regardless of which map we advance," she said.

Townsend echoed that sentiment after the vote and stressed, "this is not the final map."

The task force is to submit a map to the Board of Supervisors by April 15. Its next meetings will both be held at 10 a.m. Saturday, March 26, and Saturday, April 2.

To learn more about the panel's work, maps and meetings, visit its website.